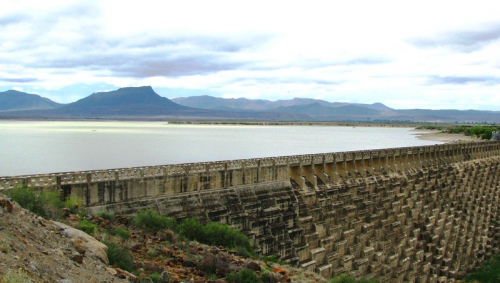 Getting there: To approach from the south (as we have produced it), start at the Dutch reformed church in the centre of Graaff Reinet and head west for 540m (three city blocks) and turn right onto Stockenstroom Street. Head north for 640m where the road kinks to thee left and crosses the Sundays River. This is the southern start of the pass.

To approach from the north, head east from Murraysburg on the R63 for 108 km via the Oudeberg Pass to arrive at the northern end of the pass. 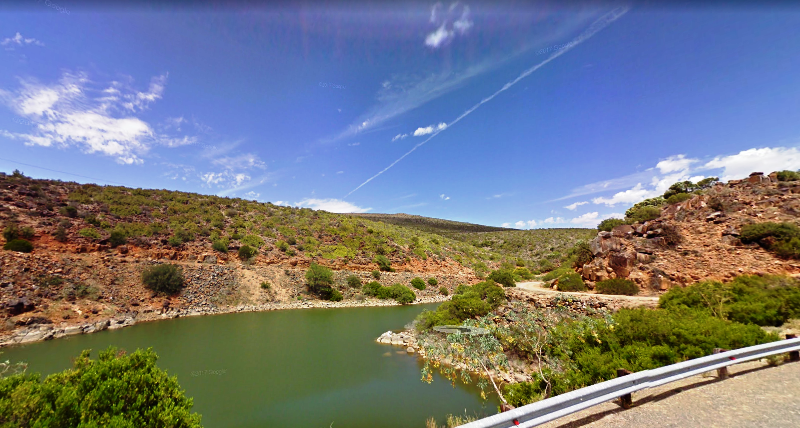 A small section of the old pass can still be seen and walked. / Photo: Google Images

Pass Description: Starting at the crossing of the Sunday's River at the north-western corner of the town of Graaff Reinet, an attractive picnic spot with concrete benches appears on the right hand side. The first corner is a 50 degree right hander with an easy radius, but the gradient picks up quickly to 1:8 as the road climbs up the flank of the mountain for a straight of 600m with some vertical cuttings displaying the geology on the left.

The next bend is a 60 degree left hander at the 0.8 km point, which is marked by a wide layby on the right, which makes a good viewing point almost directly above the impressive concrete wall of the Nqweba Dam (previously the Van Ryneveld Dam). What is interesting about the dam wall is that it is a staright wall (unlike most large dams which have curved walls). 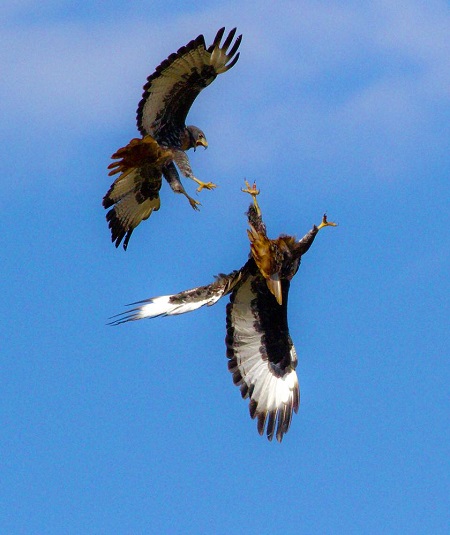 Covering a total surface area of about 1,000 hectares when at its full capacity, bird lovers will love to spend time picking out the large variety of water bird species found in the wetlands surrounding the dam. The Nqweba Dam was constructed in 1921 and completed in 1925. It cost in the region of £450,000. The dam wall is 350m wide and 42m high. The dam is fed by the Sundays River and Gatsrivier and forms the Lower Sundays River, which runs around the town‘s historic centre.

It overflowed in 1974 causing devastating floods in the town and lower down the Sunday’s river. In 2008 it overflowed with no damage and in 2011 the dam overflowed continuously for 10 weeks after considerable rain in the catchment area.  2012 was one of the best years in the history of Graaff-Reinet with the dam overflowing for nearly 6 months.

If you turn around 180 degrees and look up the mountain at this point, you will see the remains of some well constructed dry-stone walls about 20m higher than the current road. This is the original line and remains of the Van Ryneveld's Pass. Walk across the road and you will be able to follow the routing of the old road as it twists in and out of the ravines, then disappears under surface of the existing road. It is only this short section of 720m that can still be traced today. You can wall it or cycle it, but its not accessible by motor vehicle. Once the old road followed the contour of the mountain, it dropped down to a lower level which today is well below the 100% water level of the dam.

There is a short hiking trail which starts off the old road and winds through the contours at a higher level and returns to the tar road about 1 km further at the Scheepers memorial.

The road now faithfully follows the shape of the dam via a double apex left hand curve, the gently turns to the right at the 2.1 km mark. Look out for a tourist sign board on the left. An unusual monument dedicated to Gideon Scheepers tells the story of this Boer soldier.

During the Anglo-Boer War Gideon Scheepers formed his own commando, which operated in the Cape Midlands. He was captured by the British troops and charges of alleged war crimes were laid against him. At the court hearings in Graaff-Reinet he was found guilty and sentenced to death and was executed by firing squad. Amongst his crimes were that he burnt down the homes of any farmers in the area who did not support the Boer cause.

A memorial to honour this Afrikaner leader, regarded by many as a hero, was erected by the Graaff-Reinet Afrikaans Cultural Society. This memorial can be found approximatley 2km from the town on the Murraysburg road, on a site as near as possible to the place of execution. 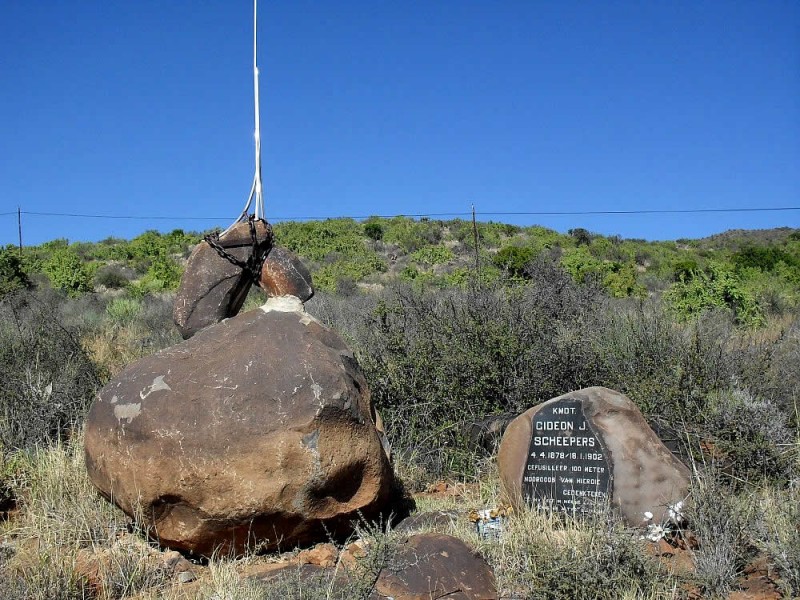 The memorial comprises of three rocks from the vicinity supporting a stainless steel needle , symbolising the spirit of hope and faith in God. The largest rock represents the steadfastness of the then young Afrikaner nation. The two tilted boulders it supports symbolise this nation - suppressed but not fallen. A fourth boulder alongside bears the inscription.

After the memorial, the road bends to the right and straightens out for a very long way towards the Oudeberg Pass in the far distance. Shortly after the pass ends, there is a road leading off to the left. This is the access road to the Camdeboo National Park and one of the most spectacular passes in the area - the Camdeboo Pass which leads to the top of the mountain and the world famous views of the Valley of Desolation.

||Click to download: Van Rynevelds Pass (R63)  (Note - This is a .kmz file which can be opened in Google earth and most GPS software systems)

Published in The Eastern Cape
Tagged under
More in this category: « Rasfonteinpoort (R61) Telemachus Poort (N6) »
back to top