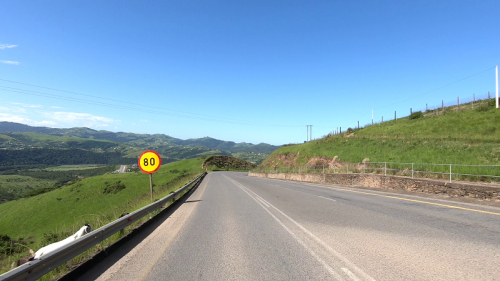 Getting there: To approach from the west (as we have filmed it), head south east from Mthatha on the tarred R61 road towards Port St Johns for 75 km to arrive at the western start and summit of the pass.

To approach from the east, drive along the R61 from Port St Johns for 17 km to arrive at the eastern start of the pass.

Description: This brand new pass is a far cry from the old road which was a dangerous twisting road with very steep gradients and when still a gravel road, produced some hair raising driving. But all this has changed with the beautifully engineered new road with its double lanes and sweeping curves providing a much safer drive.

Starting in the west at an altitude of 286m the road winds its way down the spine of the ridge via a set of triple S curves and three double cuttings. On the right is the village of Tombo, whilst the grand views to the left are over the Mngazi River valley which winds its way through the Wild Coast hills in a series of deep S bends with high cliffs. The green hills are dotted with multi-coloured huts, so typical of a picture postcard memory of the old Transkei, 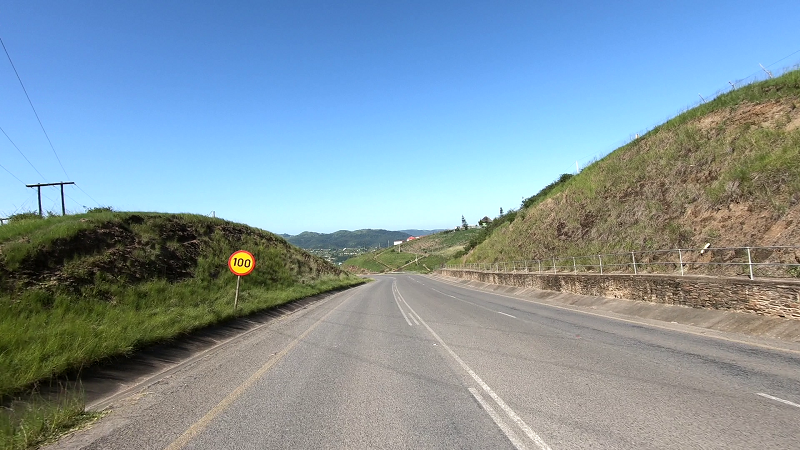 On the western descent / Trygve Roberts

As the third set of cuttings is exited via a right hand bend the speed limit suddenly changes from 100 kph to 80 kph and in short order to 60 kph and then 40 kph as the first 'traffic calmer' is approached. These need to be taken seriously. They consist of 5 sharp speed bumps each spaced a metre apart and preceded by several rumble strips. Speed needs to be lowered to a crawl (10 kph). If you cross them at 40 kph you will lose teeth. If you don't slow down, you will either damage the suspension of your vehicle, or lose control of your vehicle. Be warned! This style of speed bump is only found in this part of the Eastern Cape - and they are lethal.

Once over the first set of speed bumps, the road enters a sharp and steep left hand bend. Note that the speed limit is 60 kph here. At the end of this bend is an underpass which leads to the village of Mgxabakazi on the right. Be aware of slow moving traffic merging in at this intersection as well as livestock and pedestrians on the roadway. There is a merging lane from the left. 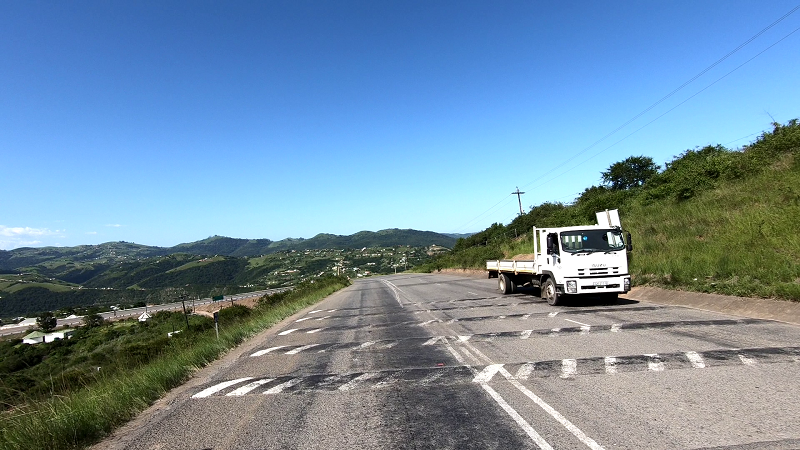 Straight after the intersection, the road bends sharply through 90 degrees to the right and reaches its steepest gradient of 1:7 as it drops rapidly in altitude down a straight of 600m. Along this straight at the 2.7 km point, the second set of speed bumps requires a reduction in speed to 10 kph as explained above.

The next bend of 90 degrees is to the right again, but has a much wider radius than the previous one. The speed limit drops to 40 kph ahead of the next overpass, which leads away to Swazini. Up ahead you will have perfect view of the double bridges over the Mngazi River, with the older one being clearly visible on the left.

Once over the new bridge the road swings away to the left through a 40 degree curve and immediately begins climbing. Care needs to be taken along this climb as there are two intersections which lead to schools. Buses stop here and school children could be crossing the road. The first intersection leads to the Qhaka primary School. The speed limit remains at 60 kph.

At the top of the hill a new overpass bridge dominates the skyline as the road climbs steeply again at 1:7 curving to the left as it passes under the bridge. There is another busy intersection here marked as Qhaka (village). The altitude at this point is 110m ASL and marks the eastern end of the pass. 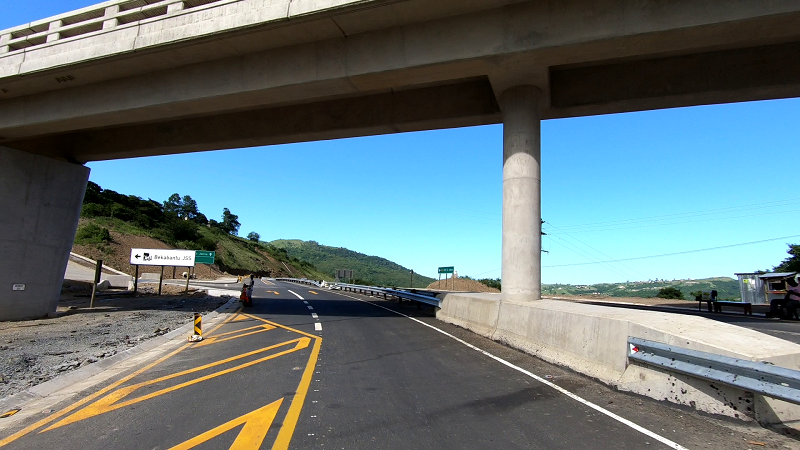 The overpass bridge that marks the eastern end of the pass / Photo: Trygve Roberts

Continue for another 17 km to reach Port St Johns. At the time of filming the construction crews were still adding the finishing touches to the new road.

The Mngazi River is one of the better known rivers of the Wild Coast, not because of its size or length, but for the beautiful resort at its mouth - the Mngazi River Bungalows. It's an upmarket facility and rather on the expensive side, but it is located in a magnificent setting and the 4 star resort comes highly recommended.

||Click to download: Mngazi River Pass (Note - This is a .kmz file which can be opened in Google earth and most GPS software systems)

Published in The Eastern Cape
Tagged under
More in this category: « Komgha River Pass (N2) Geelhoutboom Pass »
back to top