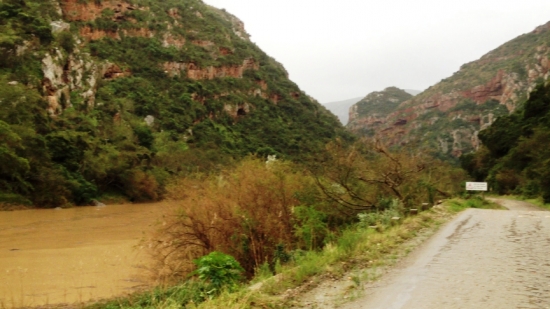 Scroll down to view the map & video. It is recommended to watch this video in HD. (Click on the "quality" button on the lower taskbar of the video screen and select 720HD)

Getting there: To approach from the west is simple enough. Get onto the R332 just south west of Willowmore and drive for 170 km via the Nuwekloof Pass, Studtis poort, Grasnek Pass, Langkop Pass, Holgat Pass and Combrinks Pass to arrive at the western start of the Grootrivierpoort adjacent to Bruintjieskraal.

For those approaching from the east, head west from Patensie on the R332 for 38 km to arrive at the eastern start of the poort.

This poort is the final obstacle for travellers that have traversed the Baviaanskloof from the western side and conversely it is the first for those heading east.

The diverse variety of vegetation in the Groendal Nature Reserve ranges from widely specied fynbos, to semi-succulent thorny bush-scrub, while the ravines are indigenously forested. The Jurassic rock formations are spectacularly dramatic in form and colour, while the deep ravines and many rivers only add to the breathtaking beauty. Hikers have been known to spot shy duikers, Cape Grysbok, grey rhebok and mountain reedbuck and of course, the large antelope you are most likely to see, is the majestic Kudu. 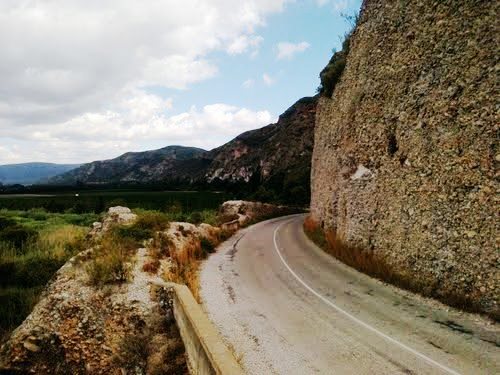 Pebble conglomerate next to the road between Patensie and Hankey - Photo: PanoramioPresumably, this is the final part of your west-east journey through the Baviaanskloof, so we will describe it from that direction (as is the video footage). The beautiful citrus producing Cambria Valley (so named after its similarity to the Cambria area of Wales) plays host to a number of guest farms offering a range of accommodation from camping to B&B to self catering. Here you can rent a modest timber cabin at Kudu Khaya, or opt for the old school house (Ou Skoolhuisie) which can accommodate a larger group of people under one roof. The Bruintjieskraal campsites is a very well run establishment offering several secluded and isolated camp sites along the banks of the Grootrivier. In addition they have charming thatched chalets which are attractively appointed and go under the name of Glencoe Chalets.

The road follows at first, the Ysrivier (Ice River), then the Witrivier (White River) which are both tributaries of the much bigger Grootrivier - the latter which has carved a beautiful and spectacular canyon through the mountains to the north and has a huge drainage area covering many hundreds of square kilometers in the Great Karoo. Further north up this canyon is another serous gravel pass, the Antoniesberg Pass, which can be accessed from Patensie. Before you tackle that one, we recommend you read the appropriate page and watch the video.

The road winds its way through fruit orchards and peaceful farms and soon paralells the the course of the Grootriver after it bends through a big loop towards the east. 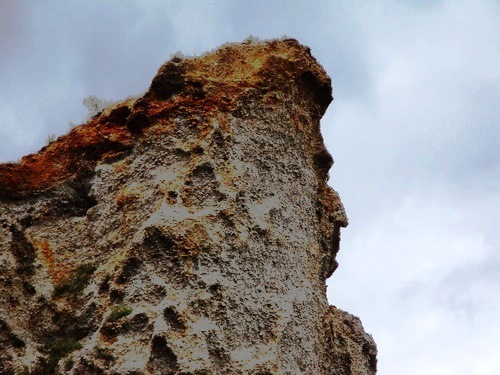 A remarkable resemblance to Queen Victoria's profile set amongst the rock formations near the exit of the poort / Photo: PanoramioThe road descends progressively to the low level causeway across the river. This is sometimes a fairly serious obstacle when the river comes down in spate. There is a guest farm close to the bridge offering good camping and cottages called Bruintjieskraal.

Once over the causeway, the road swings towards the south and follows the poort on the left hand side of the river. The walls of the poort start closing in and for the next five kilometers you will be treated to a beautiful display of rock formations, greenery and animal life, as the Grootrivier chuggs slowly past to your right. Look out for the elusive Malachite Kingfisher and one often sees kudu and of course, the ubiquitous baboons, who thrive in the poort climate.

Towards the southern end of the poort, the Komdomo campsites appear on the right. This is a Cape Nature campsite and operates at a high standard. We recommend this as a good campsite for your final night in the Baviaanskloof (or maybe your first night, if you are doing it in the opposite direction). At Komdomo the Kouga and Groot rivers have their confluence to form the Gamtoos River and the road switches direction here abruptly into the east. 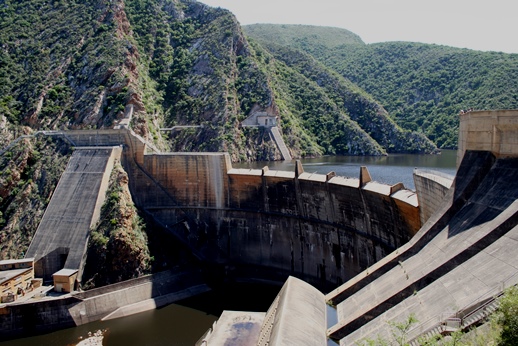 The Kouga Dam is long and deep and provides high quality water for the citrus industry further down the Gamtoos Valley / Photo: WikimediaThis also marks the end of the Grootrivier Poort. Patensie lies a further 23 km away and on this road between Patensie and Hankey you will see some unusual rock formations along the side of the road. The mountain through which the roadway cuts, is made up of a pebble conglomerate, which looks to the untrained eye to be very unstable, but it is quite the opposite. Look out for some of the famous landmarks like Queen Victoria's profile.

We also recommend a visit to the steep sided Kouga Dam (previously known as the Paul Sauer Dam) which is just a few kilometers off the main road and is publicly accessible. The dam provides a lifeline of good quality water for the citrus industry of the Gamtoos Valley.

Visitors should always check in with the authorities or one of the guest houses at either end of the reserve to ensure that the roads are passable. The reserve does get closed off to all traffic during times when the river levels become too dangerous to cross.

We have left our original river crossing video filmed in 2012 and shows much wetter conditions. This serves to illustrate how vastly different the Baviaanskloof can be, depending on the weather.

Things to do and accommodation? Click here: Baviaanskloof Overview and Orientation video.

For fans of the Baviaanskloof, we have created a quick, easy-access one click system whereby you can access any one of the 7 passes and poorts from each of the pages:

Caution: During the rainy season, the river crossings are impossible without good ground-clearance and 4WD. Always check with the authorities before you set off for the Baviaanskloof. If water levels are too high, the entire eastern section can be closed to all traffic.

The vertical profile animation as well as the fly past 3D simulator shows a very steep "witches hat" type spike about 3/4 way along the poort. This is because the Google Earth imagery and software only reads the actual string plot of the sattelite imagery. In cases where a road disappears under an overhanging cliff, or goes through a tunnel, some of the vertical cliffs appear distorted and create a false impression of serious gradients. In some of the steeper poorts and passes like Meirings Poort, Chapman's Peak and this pass, these errors manifest themselves as a streaky, smudged image. We apologise for this, but these are circumstances beyond our control. Please read the graphs taking this into consideration.

||Click to download: Grootrivier Poort (Baviaanskloof) (Note - this is a .kmz file which can be opened in Google earth and  most GPS systems)