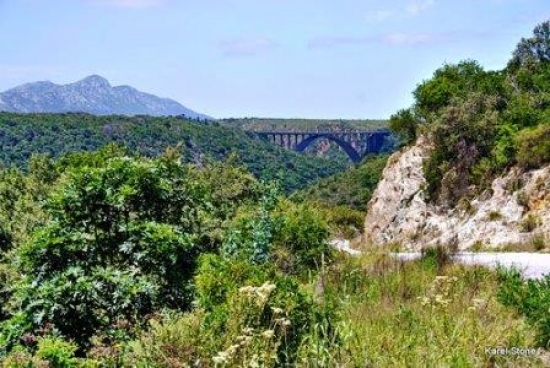 Scroll down to view the map & video. It is recommended to watch this video in HD. (Click on the "quality" button on the lower taskbar of the video screen and select 1080 HD.) Wait a few seconds for the video to display..... 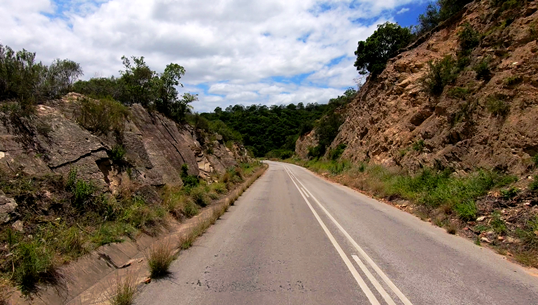 The pass (designated as the R102 route) is located 40 km West of Port Elizabeth and 50 km East of Humansdorp within a few kilometers of the coast, right next to the N2. Unlike the old Storms River Pass, which has been closed to traffic, this one also exudes all the original tell tale design traits of Thomas Bain. A year later in 1868, a massive flood washed away major sections of the pass and bridge, resulting in a complete rebuild. Constant improvements and widening took place over the next hundred and twenty years. It was tarred between 1950 and 1953. The pass served the Eastern Cape community well  - up till 1971 - as the main national road between Port Elizabeth and Humansdorp. It is still in minor use today, although with much lower traffic volumes as the new N2 carries the heavy traffic just a few hundred meters to the north. 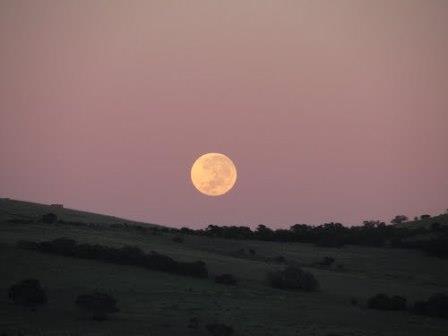 A beautiful moonrise near the Van Stadens Pass / Photo courtesy of Godfrey Carter The pass starts at 209m ASLat the western side and descends 140 vertical meters to the old bridge [89m ASL]. There is ample parking on the western side with some picnic facilities. Here you can get a good view of the lovely old bridge as well as the towering concrete structure of the new bridge in a single frame.

The ascent up the eastern side of the gorge is almost the same height as the descent. The average gradient works out at 1:15 with nothing steeper than 1:10.

There are 20 bends, corners and curves on this pass resulting in very few straight sections and consequently few opportunities to overtake. The road is also of minimum width for two way traffic and there are no safety shoulders, so pedestrians and cyclists need to be very careful.

By 1971 a new bridge was commissioned to span the 140 meter deep gorge. This bridge would capture the unenviable title of 'Bridge of Death' as only 12 days after opening, it claimed it's first suicide victim. By the end of 2012 some 87 people had lost their lives by jumping off the bridge. This works out at one death every 18 months. The new bridge has gathered a maccabre attraction of unhappy and depressed souls. Rescuers have spoken of a 'chill in the air' - this gloomy reputation has somewhat overpowered the grandeur of the old pass. 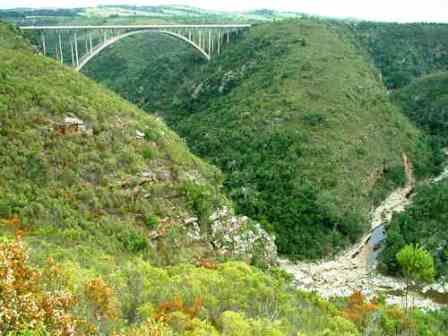 Van Stadens River Gorge with the Bridge of Death spanning the entire gorge in a single span / Photo by stonemanSAA multi million Rand camera monitoring system with a permanently manned councilling centre nearby was established in 2005 after a Jhb father lost his daughter to suicide at the bridge. To date, more than 20 people have subsequently been saved through this initiative. Sturday steel cages have been constructed along both sides of the bridge for the entire length, making it very difficult for anyone to to jump. The Bridge of Death name tag is inexorably connected to the new Van Stadens bridge which looks down on the old pass. It has become a part of the overall history of the pass.

The photo shows the view looking south down the Van Stadens River Gorge with the Bridge of Death spanning the entire gorge in a single span. This was the first bridge of its kind to be built in South Africa and up till the Bloukrans bridge was built some 60 km further west on the N2, this was at the time, the longest single span concrete bridge in Africa and the sixth longest in the world. The Bloukrans bridge now holds all those records. On a lighter note, you can visit the lovely Van Stadens Pass Nature Reserve, which can be found on the northern side of the R102 on the PE side of the pass. Admission is free. Now there's something to be happy about!

||Click to download: Van Stadens Pass (Note - This is a .kmz file which can be opened in Google Earth and most GPS software systems)

Published in The Eastern Cape
Tagged under
More in this category: « Tarka-Botha Pass Wapadsberg Pass (R61) »
back to top