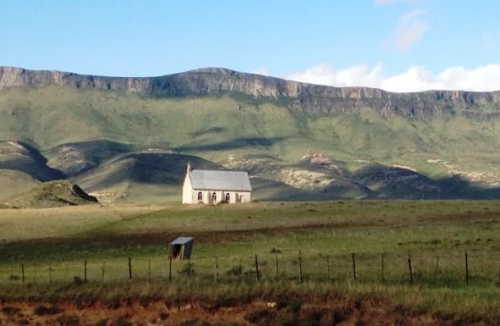 A picturesque small church in a perfect setting near the pass - Photo: Klekesini

When you're on your way to Rhodes and heading for the major gravel passes in this mountainous part of the Eastern Cape, this is the first little pass that gets you off the R58 main route and into the remoter part of the southern Drakensberg. From here you won't see tar again for a long time.

At 5,7 km the pass is of moderate length, and it has an equally moderate altitude variance of 156m. The steepest parts are at 1:9 and should present no problems for any type of vehicle in fair weather. However, with a summit altitude of 2088m ASL this pass is regularly smothered under a thick blanket of snow. It's best avoided under those circumstances. On the day of filming, after heavy rain, the road was slippery requiring 4WD.

Getting there: For those approaching from the north- head south on the R393 from either Rhodes or Lundin's Nek on the R393 until you reach the northern start of the pass at the GPS coordinates given lower down. 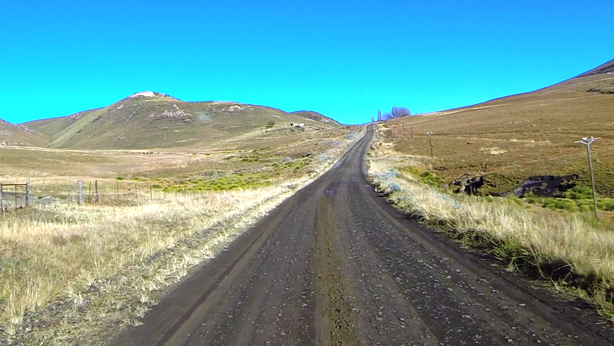 The start of the Fetcani Pass on the north-eastern side / Photo: Trygve RobertsFor those approaching from the south, drive up the Barkly Pass from Elliot on the tarred R58 and turn right onto the gravel surfaced R393 opposite the entrance gates of the Mountain Shadows Hotel after the summit of the Barkly Pass. The western start of the Fetcani Pass is reached within 1,1 km from the turn-off.

We filmed the pass from east to west. From the start, adjacent to the farm 'Glenitive', the road starts climbing gently into the south-west at an easy gradient of 1:25 via an easy and gentle right hand curve, until the heading is due west. At the 1 km point, there is a sharper bend to the right where the gradient steepens to around 1:20 and another change in pitch at the 1,8 km point to 1:16. The road heads resolutely towards a low neck in the surrounding mountains. A large mountain some 2515m high, which lies on the 'Inveruren' farm, dominates the views to the right. The farms here are mainly for the breeding of cattle, sheep and goats and many of the farms bear Scottish names - this due to the many Scottish settlers who made this part of the Eastern Cape their new home in the late 1800's 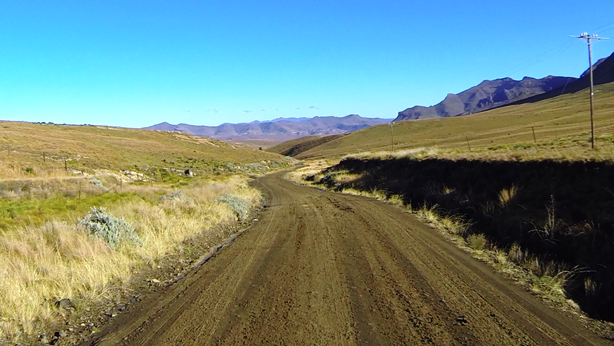 Looking west from the summit - Slippery when wet! / Photo: Trygve RobertsThe gradient reaches its steepest pitch at the 3 km mark at 1:9 and the summit point of 2088m ASL is reached at the 3,6 km point. The road is often rough near the summit, where the gradients are the steepest and the water run-off the fastest, which causes all the damage. Slow down for this section which lasts for about 300m and choose your line between the rocks and stones carefully. When it's snowing these obstacles all become invisible, making the pass distinctly dangerous.

Once the summit has been cleared, the road drops quite steeply down into the next valley heading due west for 1,1 km, where the road bends gently to the left at the 4,7 km point. From here the gradients ease off again, as the road winds its way around two hillocks in a south-westerly heading. The farm on your right carries the same name as the pass - 'Fetcani Pass'

The pass ends at the 5,7 km point at an altitude of 1994m at the crossing of a small stream opposite the farm 'Barkly Pass'. 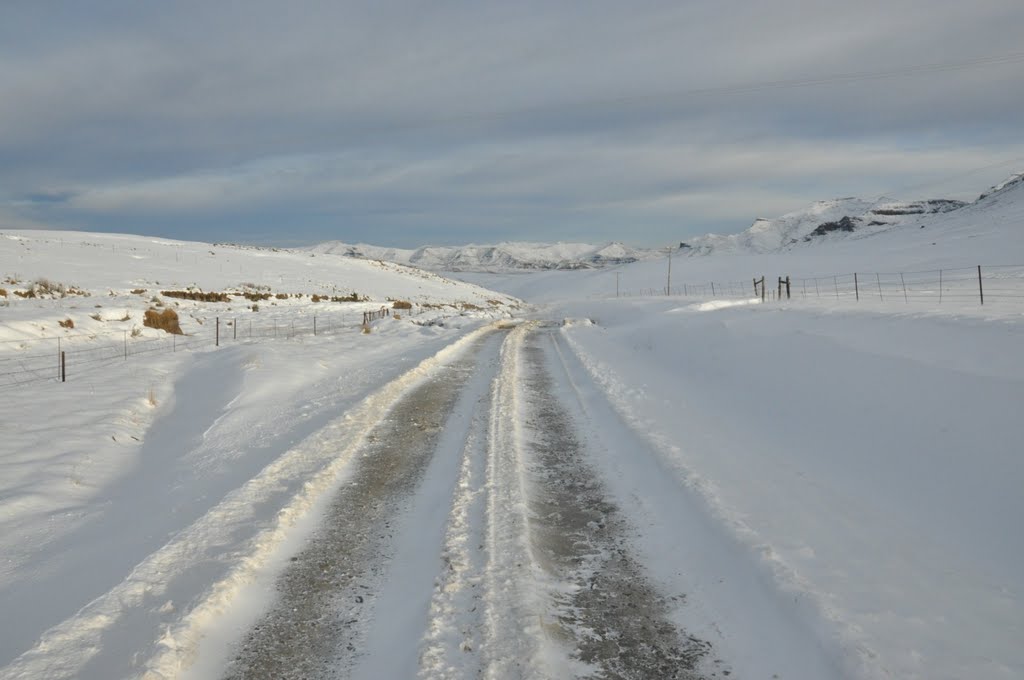 Fetcani Pass under snow / Photo: PadswerwerThe turn-off to the notorious Bastervoetpad Pass - one of the 'Holy Grail' 4x4 passes in the area, lies 1,8 km to the north of the eastern end of the Fetcani Pass.

One could not be blamed for thinking this pass was named after an Italian immigrant, but the Fetcani were in fact a ferocious Zulu tribe who once passed through here. This tribe, who were descendants of the Masutu and Mangwana tribes, became one of the most feared ethnic groups in the central part of South Africa in the 1800's. They had fled from the marauding army of Chaka, who had also stolen their cattle. With revenge in their hearts, they set out to become very aggressive and warlike, focussing only on winning their skirmishes with other tribes and acquiring cattle. They took no wives and consisted only of young fighting men.

The word Fetcani translates into "Desolators" - which is an accurate description of what they left behind after a raid. Other tribes feared them greatly and the Fetcani's fearsome reputation spread far and wide. They originally settled on land north of the Orange River, but later moved further south and east in their never ending quest to sieze cattle. They practised what the British military aptly called a 'scorched earth policy' leaving no-one alive and burned or destroyed others huts and posessions. The British subsequently applied exactly the same policy during the Anglo Boer Wars.

This tribe caused headaches not only for King Chaka, but also for the British military forces in the frontier areas.

||Click to download: Fetcani Pass (R393)  (Note - This is a .kmz file which can be opened in Google earth and most GPS software systems)

Published in The Eastern Cape
Tagged under
More in this category: « Bosnek (P0646) Hobbs Hill (N6) »
back to top