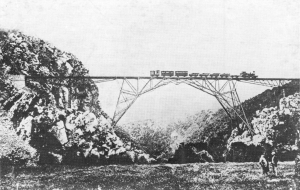 The pass can be found on the R67 tarred road between Grahamstown and Port Alfred, also commonly known as the Port Alfred Road. The pass is 4.8 km long and has an average gradient of 1:38 which is gentle. However there are a few sections that present at 1:9. It contains 13 bends corners curves within it's length, but most of them have a wide enough radius to negate the need to lower speed. The pass presents an inverted vertical profile typical of a pass that descends thorugh a river valley and rises up the far side.

The pass is bisected by the Bloukrans River which flows in an easterly direction at this point. The original farm through which the road traverses is listed as BLAAUWKRANTZ OUTSPAN and from which the pass takes its name. The spelling is in the oriiginal Dutch format, but the 1:50,000 government topographical maps spell it the modern way as Bloukranspas. (Afr). We are indexing this pass as Blaauwkrantz Pass to avoid confusion with the other 2 passes of the same name. This pass should not be confused with Thomas Bain's classic Bloukrans Pass near Natures Valley, nor with the Bloukrans Pass south of Calvinia in the Northern Cape..