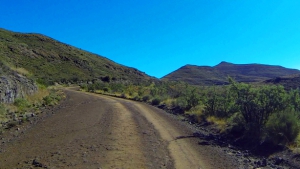 The Perdenek Pass is a moderate length pass on the winding R396 gravel route between Barkly East and Indwe. It is one of several passes along this road and the first one when approaching from the north. The others (listed from N - S) are: Greylings Pass, Killians Pass and Barkers Nek Pass. The Perdenek is named after the farm on the southern side of the summit, originally carrying the Dutch version of Paardenek. The pass is 3,9 km long and has an altitude variance of 130m, with the steepest sections reaching a gradient of 1:7.