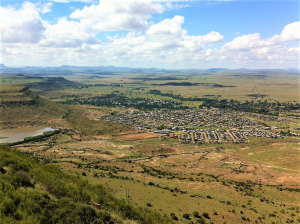 Telemachus Poort (also known as Modderpoort) is located near the tiny Eastern Cape town of Jamestown, about 60 km from Aliwal North. It is named after the Telemachusspruit which tracks the pass on the western side along its southern half. The poort is quite unusual in that it consists of two distinct sections; a “poort” section which follows the stream, and a “neck” section which climbs up a hill towards its summit on the northern side.

The road is in a good condition, and should present no problems for any vehicle in all weather conditions. There are only four corners on the pass, one of which is a big loop of 120 degrees, but this curve has a very wide radius and is easily negotiated.