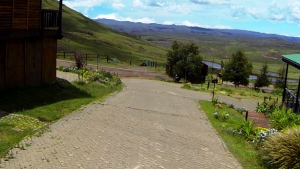 This is a complex contour road offering four small passes along its 27 km length. The road generally remains at the 2600m contour level and the vast majority of the route comprises contour road driving as it follows the shapes of the hills and buttresses. The route is doable in a high clearance 4x2 with diff-lock, but when things get muddy or snowy, it is definitely a 4x4 route. Although the road gets quite rough in places, these don't last long and most of this route is Grade 1 to 2. The road connects the Tiffindell Ski Resort in the west with the Tenahead Mountain Lodge in the east, and provides a shorter, but slower alternative to the Naudes Nek Pass. Beyond Tenahead Lodge, the road connects at the Naudes Nek lookout point at 2500m ASL.

Although we have named this route the TTT  (Tiffindell-Tenahead Traverse) which aptly describes the purpose of the road, this is a more modern take on its routing. It's also referred to by the locals by three other names: The Cairntoul Road (named after a farm on the eastern side of the traverse); Die Patrollie Pad (The Patrol Road) and Die Grenspad (the Border Road). The road has been used for many years to patrol stock theft into Lesotho. There are several small patrol huts, linked with radio sets, which can be seen along the route. These are occupied by 'young local herdsmen' who keep an eye on the hillsides and relay any suspicious activity to the main SAPS base at Cairntoul, from where the heavyweights are dispatched on horseback or by 4x4.