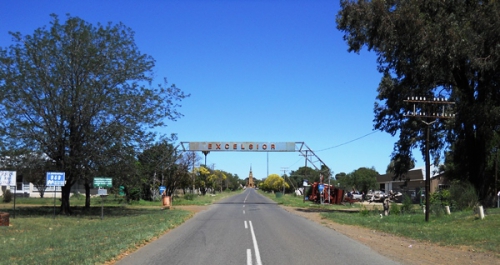 Excelsior with its church at the end of the main road - Photo: Mike Leicester 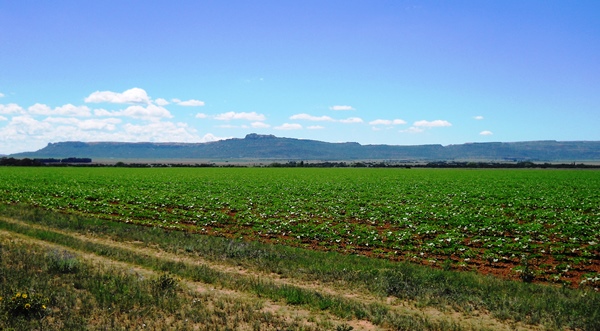 Scenery en-route to the pass / Photo: Mike LeicesterWe have filmed and described the pass from north to south. At the start, the road heads almost due south, and ascends gradually as you approach the summit directly in front of you. The road is wide but badly corrugated with loose surface gravel, although soft sand will not be an issue. As you crest the hill at the 900 metre mark, a wide vista opens up before you, and the town of Excelsior is visible in the distance diagonally to your right. The descent begins and the road continues to curve to the right, taking you into a south-westerly heading, followed by a long straight section of 1 kilometre lined by trees on either side. The road continues to descend until the end of the pass is reached at the intersection of the R709 and the R703.

Excelsior is a small farming town in the Free State province of South Africa. It was founded by the farmers in the area in 1910, who wanted a town which was closer to them than Winburg and Ladybrand. 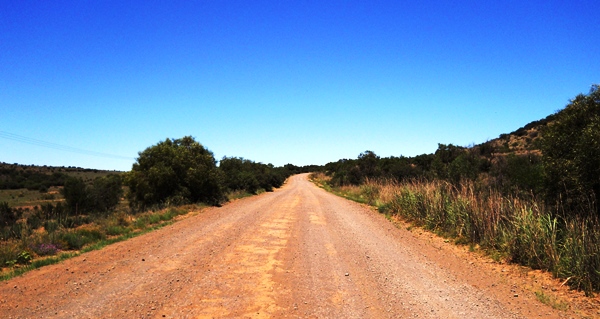 Looking south at the start / Photo: Mike LeicesterThey needed to decide on which of two farms the town would be established, the farms being Sunshine and Excelsior (Latin), which translated to English means "Higher Up", or in Afrikaans "Hoër Op". The farm Excelsior was chosen due to its elevated location. The first church was erected in the vicinity of where the Farmers Co-op is situated today.

Excelsior achieved a certain notoriety in the late 1960s and early 1970s, when nineteen people were charged for contravening the Immorality Act under Apartheid Legislation (also known as the Excelsior 19). A better understanding of what happened between white males and black females can be read in the book The Madonna of Excelsior by South African-born author, Zakes Mda.

||Click to download: Die Nek (R709)  (Note - This is a .kmz file which can be opened in Google earth and most GPS software systems)

Published in The Free State
Tagged under
More in this category: « Kommandonek (R26) Jagpoort (S1218) »
back to top