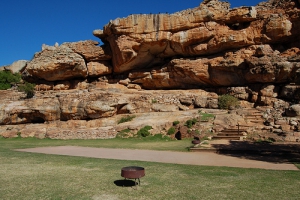 Its claim to fame is that it is the final pass after the Nardouwskloof Pass that delivers motorists to the Cederberg's beautitul Bushmans Cave Amphitheatre. It's named after a nearby peak Kraaibosberg (Crow Bush Mountain) [633,7m] which can be seen to your right at the start of the pass. At 3,6 km this pass is fairly short and it descends a substantial 250m producing an average gradient of 1:14 which places it fairly high up on the national rankings in terms of steepness. 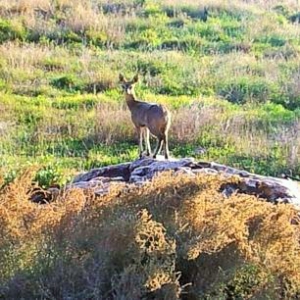 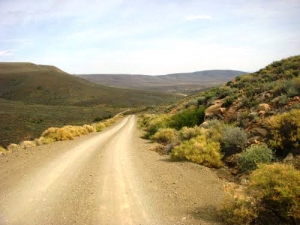 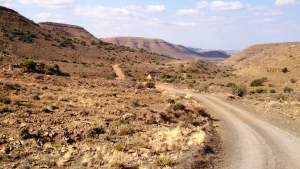 Most travellers are not even aware of this pass, as they travel the long and generally flat gravelled R356 across the flat plains of the Ceres and Tankwa Karoo between Sutherland and Ceres. This is the last meaningful change in terrain since having passed through the Windheuvel and Thyshoogte passes, several kilometres further to the north-east.

This tricky little pass, whilst not boasting any extreme statistics, has been the undoing of many an unsuspecting driver, as things can get decidedly slippery when the rains do eventually arrive. There are a number of very sharp bends and dips, some of which have negative banking and loose gravel. Proceed with caution and don't underestimate this pass!

The pass is 3,4 km long and exhibits an altitude variance of 103m which converts into an average gradient of 1:32 with the steeper parts getting into the 1:9 range. 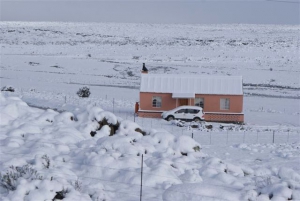 If you didn't know it had a name, this little poort (wisely listed in the Afrikaans diminutive, so as not to be taken seriously) would be gone in the blink of an eye and you would be none the wiser. Some maps and references also call this poort "Die Poort se Nek" This is about as obscure as any pass can get. It lies on a remote gravel road (the P2259) about 40 km due east of Sutherland. It is of some significance in that together with its sister poort (Bloupoort) a few kilometers to the west, these two little poorts are important landmarks on your journey to the fabulous Karelskraal Pass a little further on. 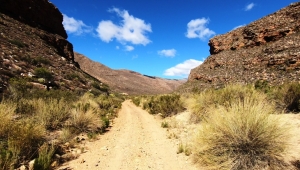 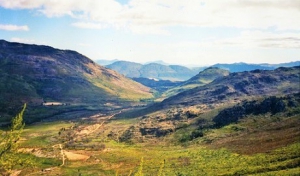 The Buffelshoek Pass should be viewed in conjunction with the Middelberg Pass as it is to all intents and purposes the southern half of the Middelberg Pass. The pass takes its name from the nearby Buffelshoek farming area and translates from Afrikaans into 'Buffalo Corner' undoubtedly relating to the presence of buffaloes here in the 1800's. The pass is gravel and generally maintained to a good standard. It offers fabulous views over the valley when driven from north to south (descending) - views that stretch back to the south as far as the eye can see in a blend of greenery and rugged mountains. It does sometimes snow on the pass, but during the summer months, it is hot and dry.

The pass compresses 30 bends, corners and curves into its 5,3 km length ranging from gentle curves to some extremely tight hairpins. Most of the steeper parts are in the upper reaches of the pass which also include most of the sharper corners, whilst the lower part of the pass through the farming area is much milder in terms of severity of bends and easier gradients. The pass is suitable for all cars, but be warned the surface can be rutted and rough at times, depending on when it was last maintained. We strongly recommend tyre deflation by at least 20% for any vehicle driving the pass. 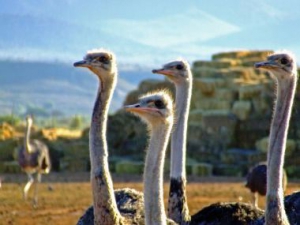 This pass is in reality just the initial climb leading from the Dwyka river to the start of the Rammelkop Pass. There are many references to the two passes being one pass, but the initial part of the climb traverses the farm Allemanshoek, thus causing plenty of confusion. To keep things simple, we have treated these as two separate passes. 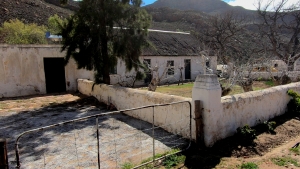 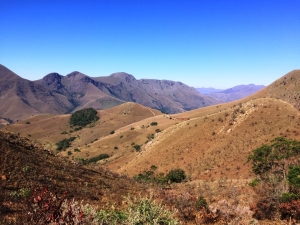 Diepgezet Pass is located in eastern Mpumalanga, about 40 km south of Barberton and very close to the northern border of Swaziland (which was renamed to Eswatini in 2018). The entire pass falls within the boundaries of the Songimvelo Nature Reserve, but there are no restrictions or gate fees applicable. It connects the tarred R40 route from near the Josefsdal (Bulembu) border post with the mostly-abandoned mining town of Diepgezet.

The gravelled road is in a reasonable condition and can be driven in a normal vehicle, but a high-clearance vehicle is recommended and a 4x4 would probably be required in wet weather. The pass offers up spectacular mountain scenery and has a height an altitude variance of 738 metres, putting it in the top 3% of the highest altitude-gaining passes in South Africa. The name is derived from Dutch and means “located deep” (within a valley).