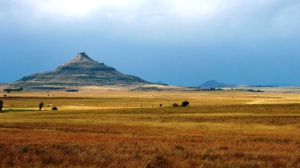 Despite some diligent research, we have been unable to establish the origins of the name of this pass, but it seems logical that it would have been named after a telegraph station established here in the early days of the region. It is located in the southern Free State province near Smithfield, in the centre of the sheep farming district of the Grassy Karoo. The pass itself is typical of the others that are scattered around this part of the country, with no significant corners and only a small gain in height of 68 metres.