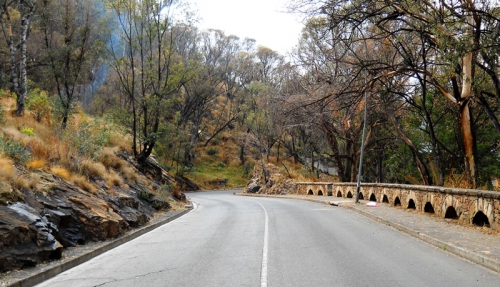 Getting there:  We filmed this pass from north to south and our directions follow the same course. From the M31 turn east onto Raleigh Street in Yeoville. Drive for 1 km then turn sharp right into Bezuidenhout Street. Follow this road for 620m and turn left into Jolly Street. After 200m take the first turn to the right into Stewart Drive.

The road starts at an altitude of 1800m and immediately swings towards the right into a sharp 170 degree bend towards the south-west. The next bend of 80 degrees to the left changes the direction into the south-east and the gradient increases sharply to a stiff 1:6. 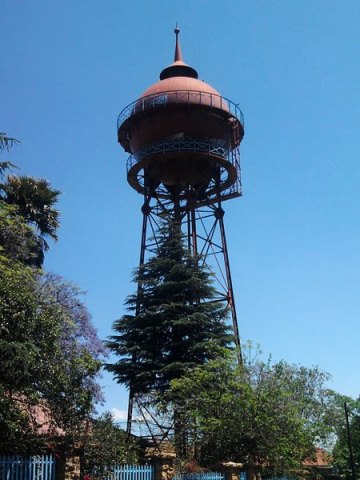 The onion-shaped water tower in Yeoville is an easy landmark to spot close to the start of Stewart Drive / Photo: PanoramioAfter 270m the gradient eases off to a much easier 1:11 as the road enters the next bend which is to the right. This bend  is not as acute as the others and the direction changes into the WSW for the next 80m, where the next sharp bend of 170 degrees to the left has to be negotiated. The pitch steepens dramatically around this bend back to 1:6 as the heading changes into the ENE for the next 120m and once again the gradient eases off quickly to 1:100.

The final set of bends occur at the 490m point in the form of a 120 degree right hand bend, which changes the bearing into the south as an S-bend needs to be negotiated at the start of the first houses of Lorentzville that appear on either side. Here the gradient gets quite steep again at 1:11 as the road drops down towards the end at 1730m ASL, at the intersection with North Avenue. Of the three Jhb. city passes, this one is the biggest in terms of height gained.

The pass was built in 1933 and named after Mr. Joseph Stewart in appreciation of his work in the interest of the district over a period of some thirty years. Construction work started in 1933 and was completed in 1935. The terrain over which the road passes, made work particularly difficult and heavy excavation on solid rock made for slow progress. The attractive low parapet wall with its open arch design was added in 1937 - the stone used being obtained from the excavated material

The end of the pass is a mere 800m to the north-east of the Ellis Park stadium where South Africa won the Rugby World Cup for the first time in 1995.

The Yeoville water tower is located in Harley and Percy Streets, Yeoville, near the fountain of Doornfontein.  It was constructed in 1914 by Sivewrghts Johannesburg Waterworks, Estate and Exploration Company. The reservoir was built to pipe water to Johannesburg under pressure. The distinctive onion-shaped tower dominated the hill to the north-east of Johannesburg for many decades and is still visible from many directions, but especially from the south. At the time of its construction, virtually all metal products in South Africa were imported and it is unlikely that such an unusual metal object could have been locally manufactured. It would appear that it would have been the only imported water tower of this shape in South Africa at that time. [Source: Wikipedia]

We issue a strong cautionary not to walk this route or even stop to get out of your vehicle. This is a high crime area and very dangerous. 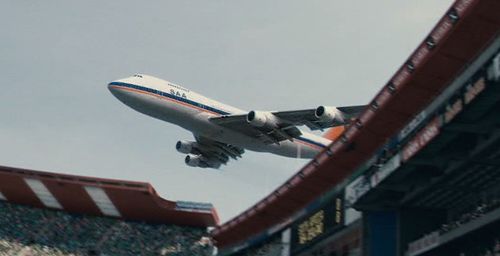 SAA 747 fly over Ellis Park Stadium / Photo: InvictusMovieThe topography of Johannesburg is distinctive with the rocky mountainous ridges and the line of koppies that runs from east to west. These are the quartzite ridges of the famous Witwatersrand. The geology is unique. Viljoen and Reimold (An Introduction to South Africa’s Geology and Mining Heritage) make the point that this is one of the few localities where the evolution of the granitic crust of Southern Africa has been preserved and can be viewed. There are several places in Johannesburg where approximately 500 million years of the Earth’s history is exposed and displayed. One needs a geological guide, but what one sees is a layering of hard quartzite rock and sediments of shale above the quartzite, within the Witwatersrand super group. To the south is the further layering of conglomerates with the gold bearing reefs, such as the Main Reef, Main Reef Leader, South Reef, Promise Reef, Kimberley Reefs etc.

Anna Smith records a Council Minute for 26 September noting the petition from ratepayers to name the “proposed connecting link road“ Stewart Drive or Road to commemorate the public work over more than quarter of a century of Mr Joseph Stewart, a local man who lived in Judith's Paarl. The decision was taken to name it Stewart Drive, although the ratepayers association of the Yeoville/Bellevue area had suggested “Bellevue Drive”. In 1937 the drive was lined with a low stone wall with open arches made of dressed quartzite quarried from the site. The stone wall is a wonderful tribute to public stone craftsmanship. Note the stone walls were not built by Italian prisoners of war. That one is an urban legend as there were no Italian prisoners of war around in the 1930s!
[Source - The Heritage Portal]

||Click to download: Stewart Drive (Jhb) (Note - this is a .kmz file which can be opened in Google Earth and most GPS software systems.)

Published in Gauteng
Tagged under
More in this category: « Munro Drive (Jhb) Tom Jenkins Drive »
back to top