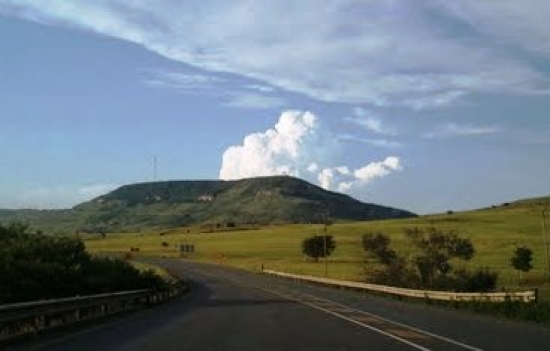 This pass, located on the N11 between Newcastle and Ladysmith, is usually known as “Ikhupe” in modern times, although the more correct and traditional spelling is “Mkupe”, an old Zulu name meaning “Eagles Nest”. To this day, black eagles roost along the cliffs in this vicinity. To add to the confusion, nobody seems to be quite sure of the actual names of the mountains on either side of the pass. Some maps and charts show the flat-topped mountain on the western side as “One Tree Hill” and others as “Mkupe Mountain”; this is reversed when using different references. To make matters worse, both One Tree Hill and Mkupe Mountain are also the names of other peaks in the Drakensberg near Cathedral Peak and Nkandla respectively. 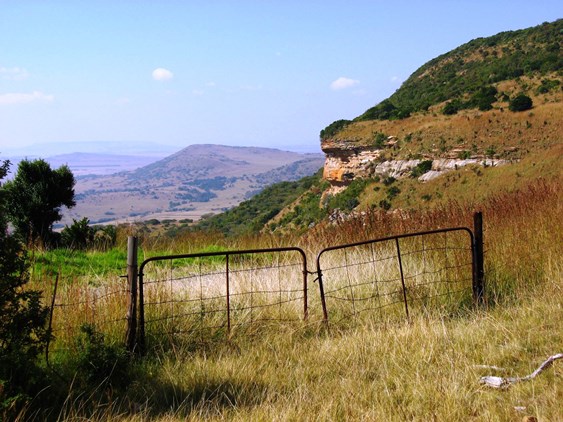 We have filmed and described the pass from north to south. From the start at the crossing of a small stream, the pass begins to ascend at a gradual and constant gradient, heading directly south. A double lane is provided within 350 metres of the starting point, and this continues right up to the summit. The bulk of Mkupe Mountain dominates the skyline on the western side, and some fine examples of umbrella thorn trees occur along the sides of the road.

After a long straight of 1.7 km, the road curves gently to the right, then straightens up again for a short stretch before turning back to the left almost into its original heading. As the end of this bend is reached, just as you pass a cell tower on the right-hand side, a small angular hill becomes visible in the distance on the left – if you look carefully, you will be able to see the unmistakeable outline of a small blockhouse silhouetted against the skyline. This is Fort Mistake.

The true summit of the pass is reached at the 3.2 km mark, where the double lane ends and the road curves through a shallow bend to the right. The descent begins with a short straight of 550 metres, followed by a long gradual curve to the left which will take you all the way to the end of the pass, marked by the crossing of a small stream. 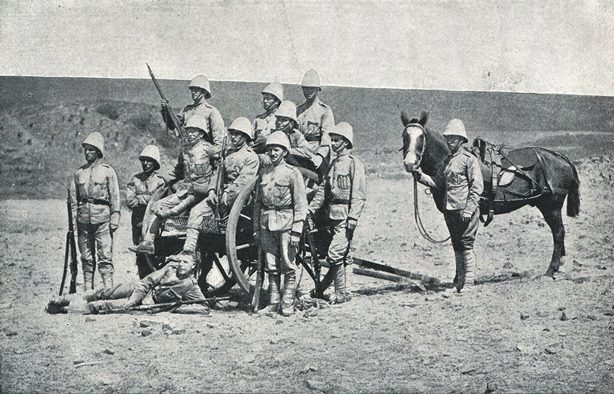 During the Anglo-Zulu War and the first Anglo-Boer War, this pass was of vital importance to the British army, as it was the supply line between their military headquarters in Pietermaritzburg and the frontier stations at Newcastle and Dundee. From the Boers point of view, it was the shortest route for any invading force from the north to strike at the communications system of the British, and the quickest route to Ladysmith.

Overlooking the pass on the eastern side is Fort Mistake, a well-preserved signal station which was hurriedly built in the armistice after the Battle of Majuba at the end of the first Anglo-Boer War. It is remarkable because it was the scene of the final battle of the war. Although the Boers that attacked the fort in March 1881 were unsuccessful, their loss was academic; the British has taken a pounding from the Boers in the preceding battles, and the war would soon be over. 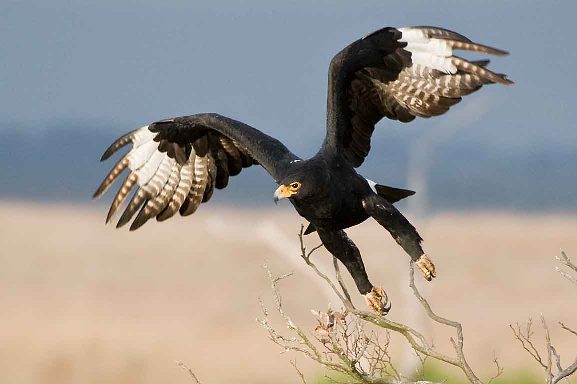 Black Eagles can be seen near the pass / Photo: Pinterest

This conflict, incidentally, changed the face of warfare for Great Britain. It marked the first time that a conventional army had been roundly defeated by an irregular force; it forced the British to abandon their characteristic red coats, which had made them sitting ducks at Majuba; and it was the last time that a British regiment carried its colours into battle.

There are many explanations as to how the fort got its unusual name. It has been called, at various times, Fort Eagles Nest, Fort Mkupe and Fort One Tree Hill. The official name of “One Tree Hill” appeared on maps and charts well into the 20th century until it suddenly disappeared. The name “Mistake” appears to have been coined by locals in exasperation at what they regarded as the bumbling ways of the British Army.

The “mistake” was the responsibility of an unknown cartographer. Up until 1910, “One Tree Hill” was always shown to the east of the road and “Mkupe Mountain” to the west. But after this date the name Mkupe slipped off the map and One Tree Hill took its place. In 1924, when an expedition from Wits University came to marvel at this remarkable and unique fort and to ask for its declaration as a national monument, the name “Fort Mistake” was firmly fixed in local minds, and this name has stuck until today. It was eventually declared a national monument in 1979, fifty five years later.

||Click to download: Ikhupe Pass (Note - This is a .kmz file which can be opened in Google Earth and most GPS software systems)

Published in KwaZulu-Natal
Tagged under
More in this category: « Hela Hela Pass (D114) Knight's Pass (P40) »
back to top