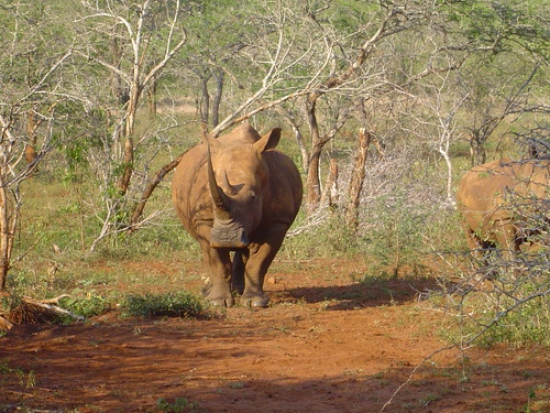 This is a very minor pass in the far northern sector of KZN. The old pass, which runs higher up the hill, was much more of a pass than the modern version which has been cut out of the hill lower down the slope, closer to the Phongola River. The pass name has officially remained but this little pass is really fairly insignificant. The old pass can no longer be driven, unless permission is obtained from the landowner. We have shown the old road as a yellow line on our video animation clip.

Scroll down to view the map & video. It is recommended to watch this video in HD. (Click on the "quality" button on the lower taskbar of the video screen and select 720HD.) Wait a few seconds for the video to display…..

Getting there - Head north east out of Durban on the N2 to Richards Bay. Remain on the N2 passing Hluhluwe / Lake St.Lucia. The road then swings more into the north and follows the valley to the west of the Lebombo Mountains. This section from Richards Bay to the pass is about 220 km long. The last section follows the western bank of the massive Phongola Dam. Shortly after crossing the Phongola River, the road swings in a wide arc into the west and crosses a farming area called Mhlati. A large mountain looms on the northern side of the river. It's named Mbandebande and stands 581,1m tall.  This marks the eastern start of the Rooihoogte Pass. Note that there are at least 3 other passes in South Africa with this name.

The old pass was probably more worthy of the title "mountain pass" as it climbed over 100m in altitude over a fairly short distance, whereas the modern N2 version, which has retained the name Rooihoogte, has half that altitude gain, making this just a normal cutting to the average traveller and obviously the road is now much safer and faster. 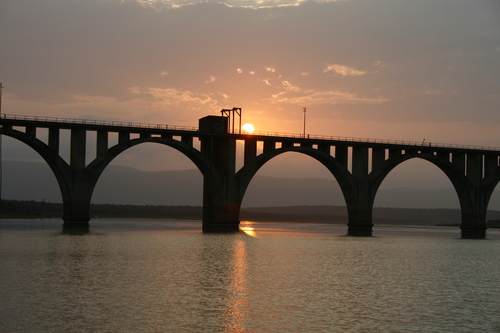 Sunset over the rail bridge over the Phongola River / Barrie Badenhorst
The old road traverses private property on the Glendore farm and has been fully decommisioned. On the eastern side, a few hundred metres up the valley is a sewage works with the extraordinarily appropriate name of Harloo. The views to the left are of the white waters of the Phongola River, which is peppered with rapids, as the river discharges itself into the Phongola Dam 20 km further downstream. The dam is also referred to as lake Jozini - particularly by the Swazi pople, as the waters of the dam stretch over the border into Swaziland. The Phongola River and dam is part of a large network of international quality game reserves, where you can see a variety of game, including hippos, rhinos and elephants.

The road climbs rapidly in the first 500m to summit at 218m ASL, then drops just as quickly down the other side to reach the lowest altitude of 178m after 1,54 km. The road runs right alongside the river and approximates its course at a fairly level gradient till the end of the pass, where it ends at the bridge over a tributary of the Phongola River.

Travel for a further 18 km on the N2 which will bring you to the town of Pongola, which boasts most amenities, as well as a golf course and a hospital.

||Click to download: Rooihoogte N2  (Note - this is a .kmz file which can be opened in Google Earth and most GPS devices)

Published in KwaZulu-Natal
Tagged under
More in this category: « Tintwa Pass (S1101) Murray's Neck »
back to top