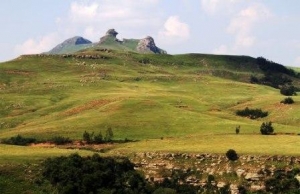 The Tintwa Pass is a 4.7 km gravel road running through the Drakensberg on the North-West / South-East axis. It is known as the S1101 and connects the farming areas north of Bergville with the upper plateau of the Free State around Swinburne, Van Reenen and Harrismith. Some references list the Middledale Pass and the Tintwa Pass as being the same pass. Together they are virtually one long pass with a plateau joining them in the middle. Although it has an average gradient of just 1:48, this figure is somewhat misleading, as the pass rises and falls a number of times over its length, and the pass is more demanding than would first appear.

The Middledale Pass is a 6.3 km tarred pass running through the Drakensberg on a North/South axis. It is known as the S1101 route and connects the farming areas north of Bergville with the upper plateau of the Free State around Swinburne, Van Reenen and Harrismith. Some references show the Middledale and Tintwa Passes as being the same pass, whereas they are actually two separate passes on the same road separated by a short plateau. There is a similar scenario in the Western Cape with the Wildehondskloofhoogte and Op de Tradouw Passes being the same pass, with the former being the ascent and the latter the descent.