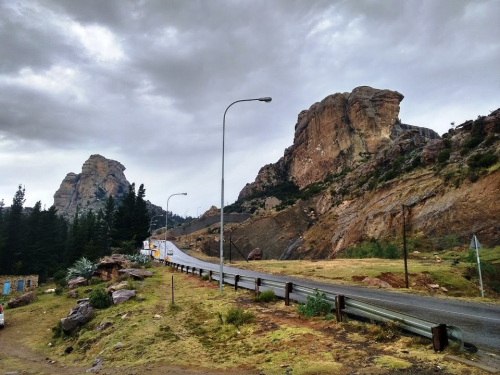 Lancer's Gap viewed from the western side - Photo: Google Images

Scroll down to view the map & video. This is a provisional video consisting entirely of Google Earth animations. The pass will be filmed in real time as soon as time permits, after which this video will be upgraded. It is recommended to watch this video in HD. (Click on the "quality" button on the lower taskbar of the video screen and select 1080HD.) Wait a few seconds for the video to display.....

Getting there: To approach from the west, (as we have produced it) head along N8 from South Africa towards the border post at Maseru. Once through the border, continue south-east along Mpilo Bloulevard for 4.7 km. Turn left at GPS S29.317198 E27.492265 after 160m you will arrive at a major traffic circle. Take the third exit onto Main North 1 Road heading ENE and continue on this road for 2.7 km till you arrive at an intersection at GPS S29.305316 E27.515448 where you must turn right (south-east). Drive for 1.6 km to arrive at a fork. The left hand option is the Naledi-Sekamaneng Rd., which you must NOT take. Keep right and drive for a further 1.4 km to arrive at the western start of the pass. 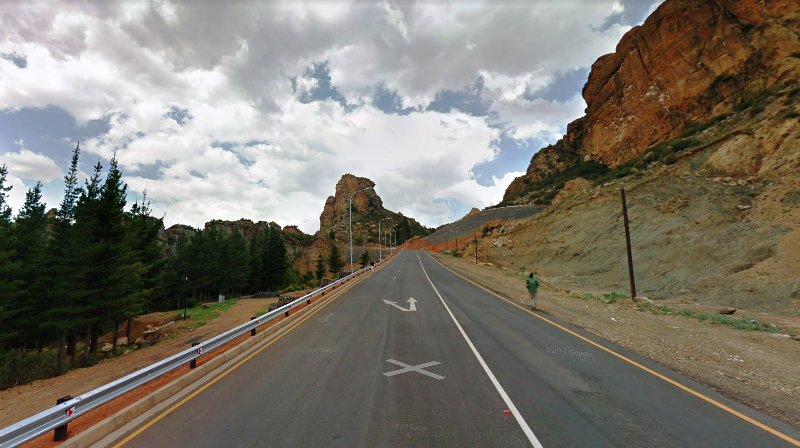 Pass Description: The approaches to this pass are through the densely populated suburbs of Maseru. Be aware of the speed limit of 50 kph and the high incidences of pedestrian activity and other traffic. The western approach passes the airport and Setsoto Stadium on the left as well as two dams on either side of the road a short distance later. Once you've turned right you will notice a long ridge of mountains ahead of you which stand 1780m tall. In the middle is a natural gap and this is where the pass is located. 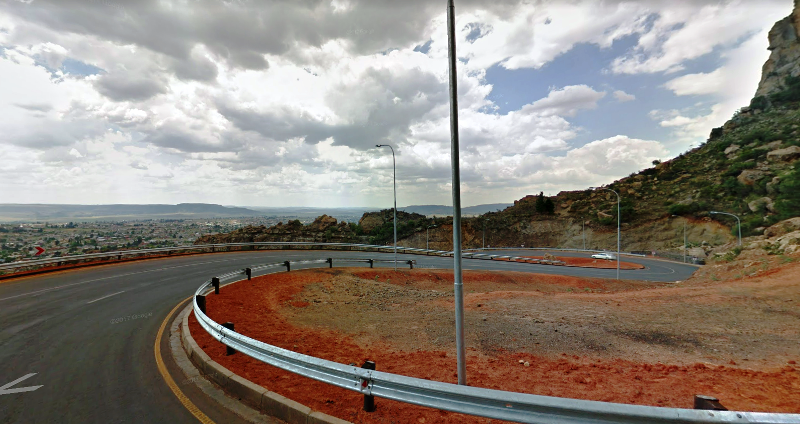 The chicane section of the pass / Google Images

It is an obvious military strategic stronghold and is undoubtedly where it takes its name from. Although by Lesotho standards, this is a minor pass, the scenery and rock formations are magnificent. The pass falls under the category of suburban passes, due to the density of the population in the immediate area of the pass.

At the western start there is a wide, sweeping left hand curve of 50 degrees, as the road begins climbing directly into the east at a gradient of 1:7. At the 400m mark, the most significant feature makes it's appearance which is a double set of hairpins. Both of these hairpins have turning angles of 180 degrees, so moderate your speed accordingly.

As the second hairpin straightens out you will be rewarded with the impressive rock formations that this little pass is so well known for. The direction settles down into the ESE and the road continues climbing at a slightly easier gradient to reach the summit point at the 1.9 km mark at an altitude of 1790m ASL at a 4 way intersection.

||Click to download: Lancers Gap  (Note - This is a .kmz file which can be opened in Google earth and most GPS software systems)

Published in Lesotho
Tagged under
More in this category: « Laitsoka Pass (A25) Lebelonyana Pass (A4) »
back to top