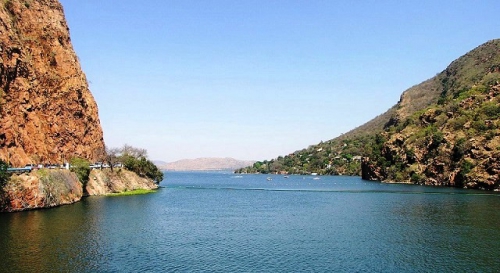 Vlieepoort, also commonly referred to as Vliegepoort, is located in the Crocodile River valley to the west of Thabazimbi. The Crocodile River originates in the Witwatersrand area and flows in a northerly direction, via the Hartbeespoort Dam, until it joins up with the Marico River on the Botswana border. Here it forms the Limpopo, which was popularized by Rudyard Kipling as “the great grey-green greasy Limpopo River” in his short story The Elephant’s Child. Like most other poorts, Vlieepoort is fairly flat and has a height gain of just 42 metres, but it is much longer than the national average at over 12 kms. The road surface is gravel, but it is generally in a good condition and can be driven in any vehicle, weather dependant. 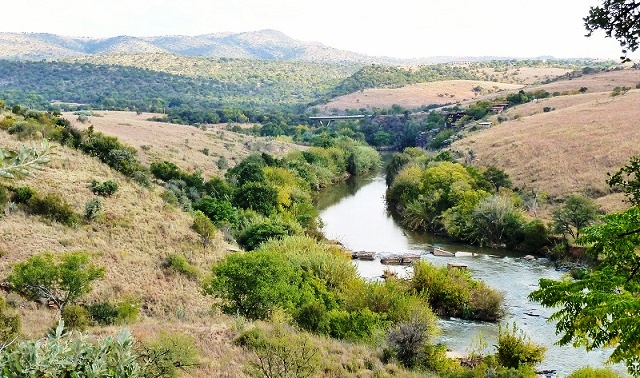 Follow the course of the Crocodile River / Photo by WikimediaThe pass begins with a shallow turn to the left, followed by a long flat straight section of 1.4 kms. The road then kinks very slightly to the right, followed by another straight of 800 metres. The poort begins to narrow at this point, being constrained between the river on your left and the mountains on your right. Another shallow turn to the right follows, and then the road begins to undulate slowly, heading in a south-easterly direction, edging ever closer towards the river as evidenced by the increasing density of the vegetation. At 6.5 kms from the start, the road turns sharply right, away from the river, and begins a steep climb to the summit of the poort at the 7.4 km mark. The road surface has deteriorated here due to water runoff, so you will need to slow down and drive carefully. Now following one of the Crocodile River tributaries, the Bierspruit, the road begins a series of very gentle left-hand turns followed by long straight sections, bounded on both sides by the usual game fencing. At the 10.9 km mark, the road traverses an obvious low point between two mountains, then crosses over a bridge and makes a final left-hand turn, before reaching the end of the pass at the T-junction now directly in front of you. Turn left if you want to head towards Thabazimbi, or turn right if you want to go to Northam. 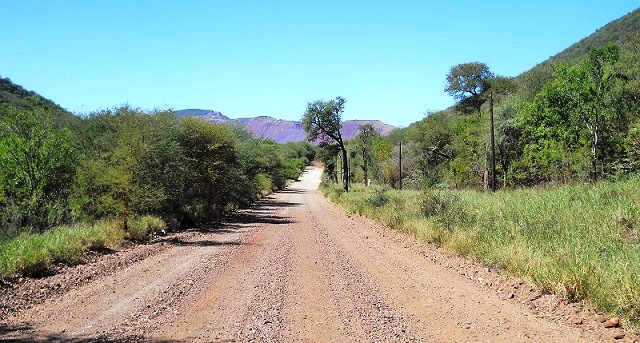 The northern start of the poort / Photo by Mike LeicesterVlieepoort translates directly from Afrikaans into English as “Fly Passage”. The species of fly referred to here is the Tsetse (the Tswana word for “fly”), which was once very common in this area. This large biting insect inhabits much of sub-Saharan Africa, and is the primary vector responsible for sleeping sickness in humans and nagana in animals, both of which are devastating diseases. Tsetse is regarded as a major cause of rural poverty in Africa, because they prevent mixed farming. Cattle deaths caused by the disease are estimated at 3,000,000 per annum, and human deaths at around 50,000 per annum, mainly in central Africa. 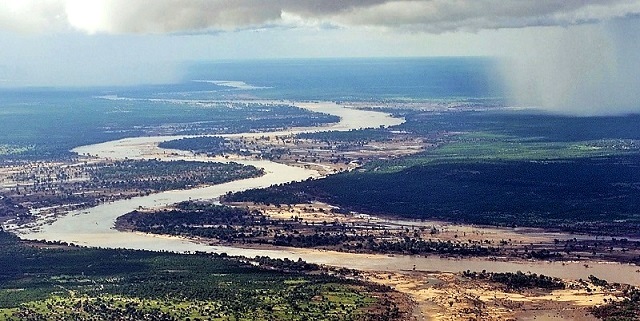 Rudyard Kiplings "greasy grey-green Limpopo River" / Photo: WikimediaSleeping sickness (African Trypanosomiasis) begins with a Tsetse bite which leads to an inoculation in the sub-cutaneous tissue. The infection invades the lymphatic system, which then progresses into the blood stream and crosses into the central nervous system and brain, causing extreme lethargy (hence the common name) and eventually death, unless treated in its early stages.

The Tsetse is the primary reason why the northern parts of South Africa were left mostly unpopulated and uncultivated until the late 19th century. Very few farmers had penetrated into the interior of what is now Limpopo province, and many of the local tribes which regarded cattle as a measurement of wealth had avoided the area entirely. As these farms slowly became established, the woodland vegetation inhabited by the Tsetse was gradually cleared to grassland, and the indigenous wildlife population was decimated by hunting, thereby depriving the fly of its habitat and primary food source. 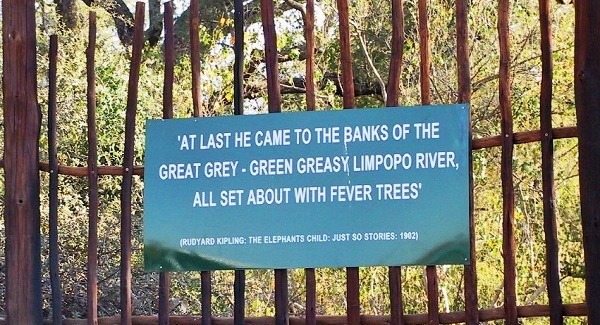 Rudyard Kiplings famous alliteration In the 1890s, the Tsetse disappeared almost completely from the area. This has been attributed to the Rinderpest (cattle plague) which swept through the region in 1896, killing approximately 90% of all cattle in Southern Africa, and devastating wildlife species such as buffalo, wildebeest and large antelope. Paradoxically, this opened up the area for settlement, and many new farms and villages began to be established.

Rinderpest today has officially been eradicated, making it only the second disease in history to be fully wiped out (the first was smallpox).

||Click to download: Vlieepoort (Note - This is a .kmz file which can be opened in Google earth and most GPS software systems)

Published in Limpopo
Tagged under
More in this category: « Sandrivierspoort (D928) Brown's Cutting (D1939) »
back to top