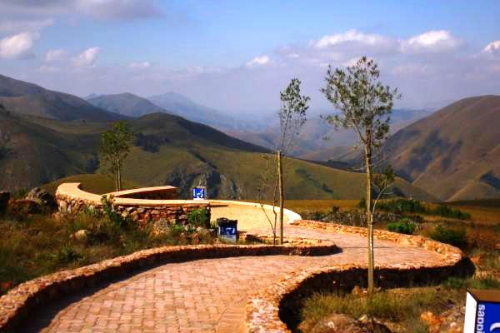 The pass is named after the small town of Bulembu just inside Swaziland at the southern terminus of the pass. It twists and turns its way through one of Mpumalanga's most beautiful valleys and over some of the oldest mountains on earth. A whole list of attractions make this a bucket list tar pass, which include magnificent scenery, mind boggling geology, a well-engineered road, dense forests and rich mining history. Allow plenty of time to stop at the various tourism points. Any visit to Barberton, should include a traverse of the Saddleback and Bulembu passes to make your visit complete.

The pass contains 124 bends corners and curves within its 26,5 km distance, which equates to a corner every 213 metres! Comply with the 40 kph speed restriction and your trip should go well.

The pass displays an unusual vertical profile with 8 individual summit points, which creates an undulating picture, rather than the usual classic pass profile of up-summit-down. The pass has something of a reputation for fatal accidents, but the frequency has decreased since the road was rebuilt recently. 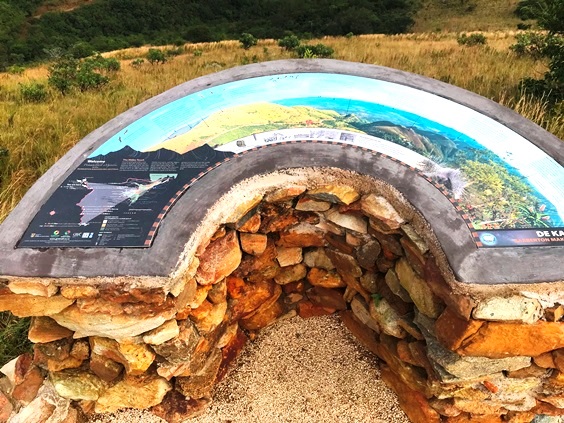 Detail on one of the toposcopes / Photo: Trygve Roberts

There are a couple of noteworthy points on this pass. It is considered by some (qualified) observers to be the most beautiful mountain pass in South Africa. That is one serious claim! The second is that the entire pass carries a very low speed limit of 40 kph. Again there is good reason for this, as this pass is often shrouded in dense mountain mist, heavy rain or both and to add to those dangers, it is smack bang in the middle of a major forestry area, so heavy forestry vehicles are almost always trundling along this road, often at low speeds.

The grandeur of the scenery goes without saying, but the local authorities have gone to a lot of trouble to add tourism value to this pass, as there are several sites where toposcopes and other visual information systems inform the traveller of the amazing geology to be seen on the pass. The laybys have been attractively constructed with picnic facilities.

Bulembu is a small town located in north-western Hhohho, Swaziland, 10 km west of the town of Piggs Peak. Located above the Komati Valley in Swaziland’s Highveld, Bulembu is named after the siSwati word for a spider's web. The town of Bulembu is privately owned by a non-profit organisation, Bulembu Ministries Swaziland. 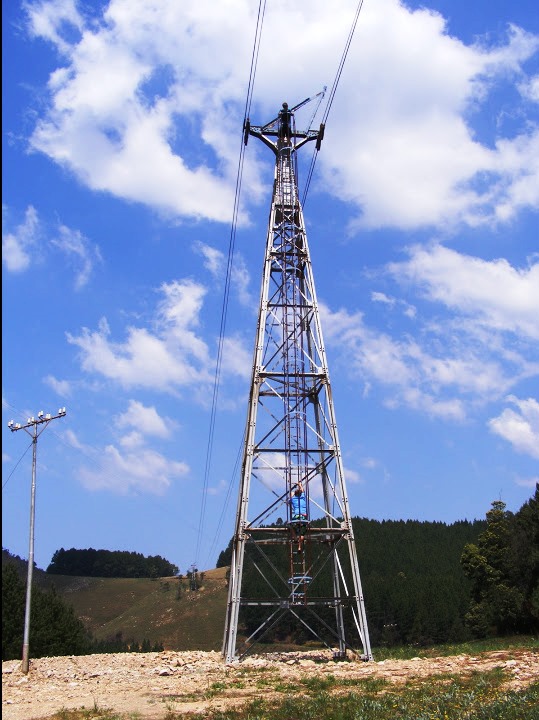 Look for the mineral cableway along the pass / Photo: Panoramio

Pass Description: After turning left off the tarred road between the Saddleback Pass and Shiyalongubo, it's just 2 km (note this road is still the R40) to reach the northern starting point of the Bulembu Pass. Before you commence with this drive, remind yourself to stick to the speed limit in the interests of your own safety and other users of the road. Ahead of you lies a visual feast and the more often you can stop and take in the grand vistas of forest clad mountains, deep valleys, waterfalls and fast flowing rivers, the more you will enjoy your journey.

This pass requires a lot of concentration, mainly due to the high frequency of bends. Of the 124 bends, corners and curves, 25 of them exceed a turning radius of greater than 90 degrees. It's also worth noting that although the road surface is in good condition, that there are no safety shoulders on this road. When the mountain mists shroud the pass and hills in a thick white blanket of cloud, overtaking the slow moving forestry trucks in low visibility becomes a scary proposition. It's best not be in a hurry on this road. A large scale aerial cableway was constructed between Bulembu and Barberton to transport minerals. This cableway crosses over the pass eight times over its length.

The road cuts through a complex routing along the south-western side of the Makhonjwa Mountains, which stretch away into the north-east over a vast distance smothered with forests, valleys and an array of smaller peaks as far as the eye can see.

As you progress along the pass, you will reach three smaller false summits, before reaching the real summit. The true summit of 1611m ASL is reached at the 10,3 km point. The views are 360 degrees from this point, but be sure that you park well off the roadway. Many drivers become completely disoriented on this pass. This is due to the complexity of the bends and the dense forests, which don't allow for easily identifiable visual objects for orientation purposes. 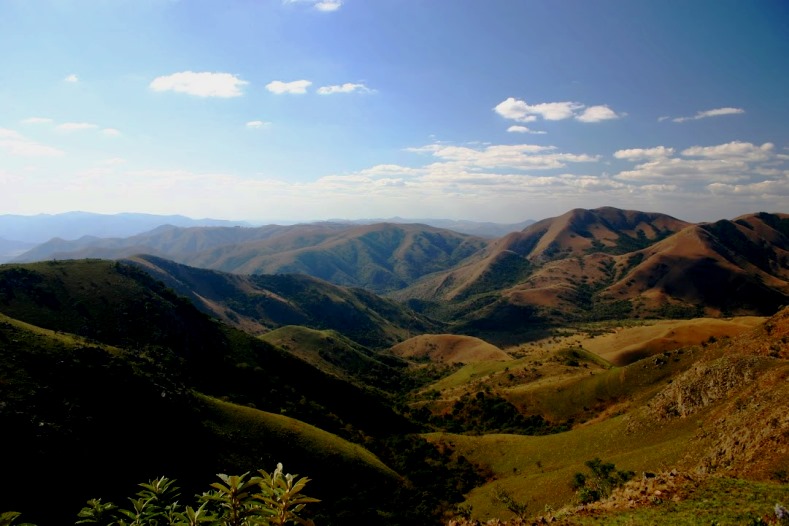 One of the favoured attractions for driving this pass is absorbing yourself into the facts and figures presented along the fairly new Geotrail. It allows you to step back in time and explore what the surface of our planet would have looked like 3.5 billion years ago. Before man, before the dinosaurs, when the first life forms were only beginning to appear and the planet was a far more hostile place.

Along the route you will see evidence of the first life visible to the naked eye, of superhot volcanoes, ancient tsunami’s and what could be the first land! It is impossible to overstate the importance of the Geotrail, as these rocks only occur in two places on Earth and the other is totally inaccessible. So come and let the Geotrail reveal its secrets, take in the spectacular scenery & wildlife along the route and learn about life 3.5 billion years ago. 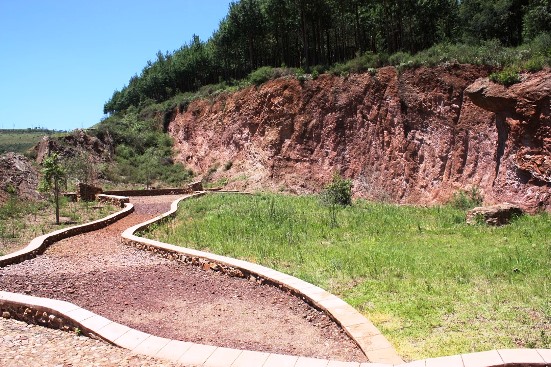 One of the geology hot spots on the geo-trail / Photo: John ForbesThe Geotrail starts just outside of Barberton at the intersection between the R40 and R38 and continues all the way along the R40 to the Swaziland border. The route takes around 5 hours to do, so pack a picnic and make use of the picnic sites along the way.

This section of the R40, between Barberton and the Swazi border, is also known as the Barberton Makhonjwa Geotrail, a self-drive trail with 11 stops at information boards explaining the various geological marvels on Barberton's Greenstone Belt, the best-preserved example of a 350 million year sequence of Archaean earth rocks (ancient volcanic and sedimentary rocks unique to Archaean earth between 3.2 and 3.57 billion years ago!) in the world.

Fourteen attractive rest stops have been created along the route; each featuring a geological showcase in the form of toposcopes, which help you identify the names of mountains, valleys and rock types and match them to the pictures in front of you. Not only is everything spotlessly clean (not a snippet of litter to be seen anywhere), but each of the 14 view sites have been carefully designed to maximise on the incredible scenery. It is both an educational and scenically impressive experience. One could easily spend an entire day on this pass combo. 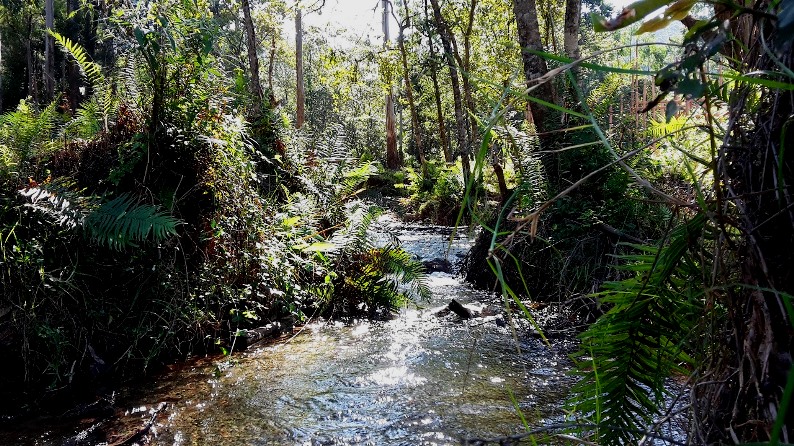 Tucked away in the most ancient corner of our land, hard against South Africa’s border with the kingdom of Swaziland, lies a hidden and spectacularly scenic wilderness of immense geological importance. The Makhonjwa Mountains in Mpumalanga are not well known by their original name, maybe that’s because Swazi folklore has it, that pointing at them brings bad luck.

A major drive for international recognition, started 13 years ago, is finally bearing fruit. The Barberton Makhonjwa mountains of the Barberton Greenstone Belt are now on the tentative list of UNESCO’s World Heritage Site programme. The geotrail uses richly-illustrated panels that draw aside the curtains of arcane geological communication, and reveal the significance of the Barberton Greenstone Belt in every-day language and concepts. This geotrail is a bucket list candidate, and something for everyone from families on leisure breaks to geology students to enjoy. 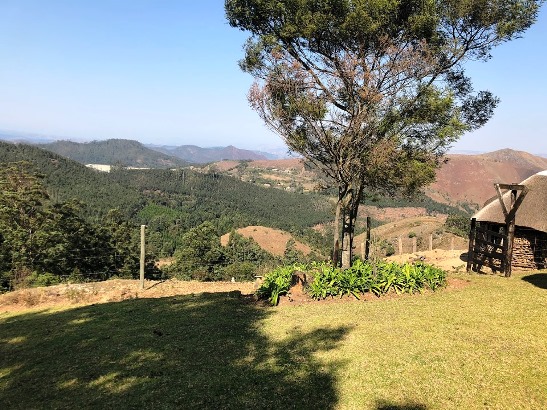 After the summit, you are faced with a very long descent of almost 5 km where the altitude reduces by just over 200m.From this point the road begins climbing again and reaches another three false summits at the 16,9, 20,9 and 24 km points.

At the 24,7 km point a signboard warns of a turn to the right. This is a wonderful gravel alternative if you don't intend visiting Swaziland. It drops very steeply down the Diepgezet Pass and a visit to the old ghost town at Diepgezet is a must. From there you can continue on towards Badplaas.

The valleys and mountains get deeper and bigger as you approach Swaziland. The best views of the whole drive are to be had from the R40 just before the Swaziland border with South Africa. The pass ends at the Josefsdal Border control point at an altitude of 1404m at the 26,4 km point.

Between 1939 and 2001, Bulembu operated as a chrysotile mine. Originally named Havelock Mine, the mine was part of the Turner & Newall Asbestos Group. The mine encountered heavy losses in the late 1980s and subsequently went bankrupt in 1991. The company was liquidated and the assets purchased in 1991 by HVL Asbestos Swd. Ltd. who changed the name of the mine to Bulembu Mine. HVL Asbestos ran the mine until it went into liquidation in 2001.

Upon liquidation the 10,000 residents of Bulembu soon deserted the town in search for employment elsewhere and the town became a ghost town with little more than 50 people remaining there. This was during the time that Swaziland was (as it continues to be) ravaged by the HIV/AIDS virus. There was a 900% increase in infection in one decade with the infection rate sitting at 3.9% in 1992 to 38.6% in 2002. Today over 40% of the population is infected and the result is a nationwide orphan crisis.

The assets were purchased by Bulembu Development Corporation who sold the town and its 1,700-hectare property in 2006 to a not-for-profit: Bulembu Ministries Swaziland.

Bulembu was purchased with a vision to rejuvenate the town to a self-sustaining entity that combines sustainable, innovative enterprises with orphan care for 2,000 of Swaziland’s most vulnerable children. The two-pronged approach of coupling community enterprise with community care is what will carry Bulembu toward its goal of achieving self-sustainability by the year 2020.

||Click to download: Bulembu Pass (R33) - (Note - This is a .kmz file which can be opened in Google earth and most GPS software systems)

Published in Mpumalanga
Tagged under
More in this category: « Sudwalaskraal Pass (R539) Burgers Pass »
back to top