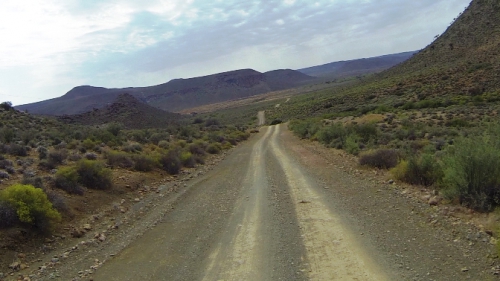 This well hidden gravel pass lies in the southern sector of the Northern Cape in an area knows as "Die Hantam" about 40 km north-east of Nieuwoudtville. It is primarily a farm road and offers not only unusual and rugged scenery, but provides a sense of peace and timelessness in this sparesely populated region of South Africa. The biggest attraction to drive this pass is that it descends through an astonishing Quiver Tree (Kokerboom) forest - probably the densest population of Kokerbome anywhere in South Africa. The best time to visit is in late winter and spring when the landscape is a riot of colour as far as the eye can see.

Getting there: We filmed this pass from south to north in the descending mode to maximise on the scenic value and describe it in this direction as well. If you approach from the north, please remember to invert all the co-ordinates and directions. The pass can be approached from the west via the R357 as well as from the east from the R355.

Just getting there is a beautiful drive in itself / Photo by Trygve RobertsFrom Nieuwoudtville head south-east out of the village on the tarred R27 for 7 km and turn left (east) just after the wildflower reserve onto a gravel road at GPS S31.387399 E19.177645. Remain on this gravel road (which is normally maintained to a good standard). There is another minor fork about halfway along this road just after a dry riverbed crossing at the Soetlandsfontein river. It's obvious to take the left hand fork. Measure 26 km from the point of leaving the tar to arrive at a Y-junction co-inciding with a (usually dry) river bed crossing - the Klein-Toringrivier. Take the left hand option, which is also the southern start of the pass. GPS co-ordinates are S31.285614 E19.375350. 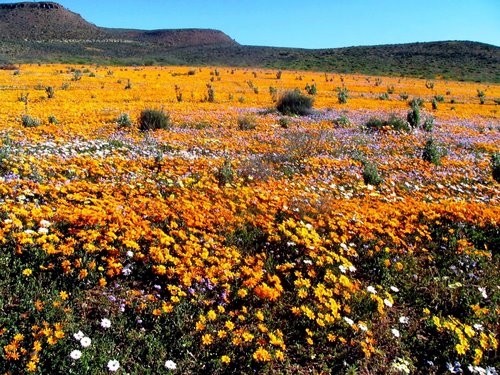 Expect wildflowers like this in spring / Photo by Pieter MeisenheimerWe recommend driving this pass in a circular route, returning via the tarred R357 from the north back to Nieuwoudtville. The loop provides an outstanding wild-flower route in August and September, with the added bonus of seeing the kokerboom forest area. Except in very wet weather, the entire route is doable in a normal car, but be prepared to get dusty and/or muddy.

The pass starts at the Klein-Toringrivier crossing, which is usally bone dry. To the right of the road is a conical peak, appropriately named Rondekop [736m]. The road skirts around the left (west) hand side of this peak, then starts descending at an easy gradient of 1:20 for the next 2 km, maintaining a steady heading into the north.

At the 2 km mark, the road swings sharply away to the right (east) through 90 degrees and dips down quickly, followed by a blind rise. Drop your speed here as immediately after the blind rise, there is another  sharp bend to the left with some steep, unguarded drop offs, but what really makes this corner dangerous,is the negative banking. The road is also quite narrow here and if you underestimate this corner, your vehicle might well go over the edge. 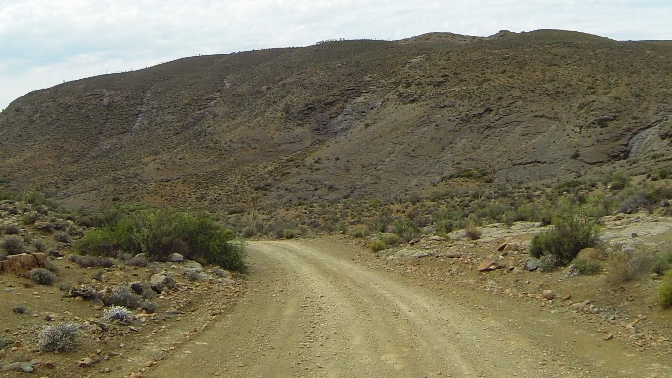 The dangerous, incorrectly banked left hand corner / Photo by Trygve RobertsOnce you are safely though this bend, the heading returns into the north and a long straight descent can be seen dipping down in the distance towards the Hantamsrivier, after which this little pass is named. The hills to the east are peppered with Quiver trees - literally hundreds of thousands of them, big and small. Dont worry about getting closeup shots of the kokerbome here as a little further there are many fine examples growing right next to the road, waiting patiently to be photographed.

The descent from the sharp bend lasts for 1,5 km and is undulating towards the lower end. Just before the river, there is a closed farm gate. Please close it again after passing through. After the gate the road bends slightly to the left and drops down to the river. If there is water in the river, you will need to walk it first along both tracks to check for underwater obstacles, mud, holes and depth. If you're satisfied that your vehicle will make it, proceed with the crossing. If not, you will need to retrace your route. 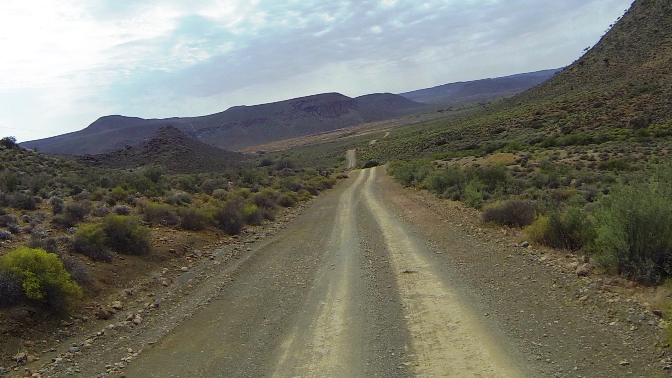 Looking north from the halfway point / Photo by Trygve RobertsWe filmed the pass during September and there was no water in the river, making the crossing easy. This is also where the pass ends at its northern end, but it is by no means the end of a really scenic drive as the road reaches a fork 150m after the river. If you take the right hand fork, you can reach the R355 after 8 km between Loeriesfontein and Calvinia.

If you want to return to Nieuwoudtville, take the left hand option. The road heads west along the northern bank of the Hantamsrivier over fairly level terrain and reaches the Gannabos guest farm after 7 km. Some GPS mapware might give conflicting information as the road has recently been changed to divert traffic away from the guest farm, but it is signposted - take the left hand fork, which doesn't "feel" right, but it rejoins the main road again after the guest farm, about 1,5 km further on. 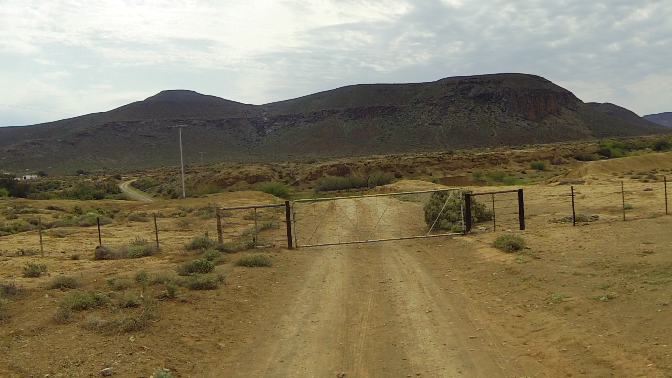 The end of the pass is at this closed gate / Photo: Trygve RobertsSoon the road recrosses to the southern bank of the river and follows a long series of ridges and peaks where the main Kokerboom forest is located. This a private nature reserve which the owner has generously opened to the general public for free. There are some rules and regulations which you should read and comply with in order for all of us to be able to enjoy this privilege into the future. Most of all dont pick any flowers or plants and comply strictly with the speed limit.

After another 12 km of easy gravel road driving including a few cattle grids and farm gates, the road forms a T-junction with the tarred R357. Turn left to return to Nieuwoudtville (14 km) via the Brandkop Pass or if you want to head for Loeriesfontein, turn right - drive for 24 km.

||Click to download: Hantamsrivier Pass (Note - This is a .kmz file which can be opened in Google earth and most GPS software systems)

Published in The Northern Cape
Tagged under
More in this category: « Carlton Heights (N9) Kiewiet se Hoogte (R356) »
back to top