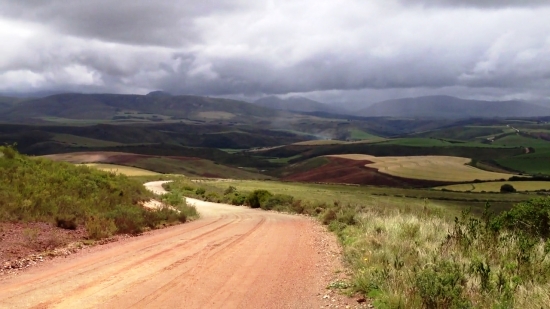 This smallish pass forms part of a great gravel drive along some farm roads under the towering backdrop of the Outeniqua mountains not far from the R328 and the Robinson Pass. It traverses two deep valleys and offers tranquil pastoral scenery in this dairy farming region with its steep hills and many rivers. As a bonus it provides a lovely drive through the countryside, with access to the Robinson Pass and several other passes in the area, including Cloetes Pass, Du Plessis Pass, Attakwaskloof Pass and Jan Muller Pass.

Scroll down to view the map & video. It is recommended to watch this video in HD. (Click on the "quality" button on the lower taskbar of the video screen and select 720HD). Wait a few seconds for the video to display.....

Getting there: Taking in the Du Plessis Pass between Mosssel Bay and Herbertsdale on the R327 (tar), makes this and interesting circular route to explore by turning right (East) onto a gravel road just north of Herbertsdale. The road will bring you to a fork after 5 km., where you should take the left fork over the Hagelkraal Pass. Ensure you have the GPS co-ordinates plotted as waypoints as there are several gravel options in this coastal farming area and it's easy to get confused. 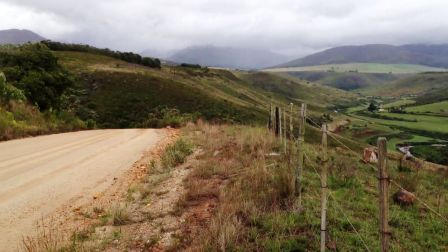 Hagelkraal Pass offers pastoral scenery / Photo: Trygve RobertsThe farm in the middle of these two foothill style passes is called Hagelkraal with another sign proclaiming it to be Haelkraal. We have opted for the original Dutch farm "Hagelkraal" as a more authentic name. The pass has an unusual vertical profile in the form of a W with a false summit in the middle.

The pass starts at its western end at the crest of a short, sharp hill at an altitude of 256m ASL at a fork in the road. Keep to the bigger road, which is the right hand option. The views to the right are superb with a small tributary of the Meulrivier having cut a deep valley and forms a confluence with the south flowing Meulrivier close to the first bridge.

The river systems in this region are as truncated and complex as the names bestowed on them. The Haelkraalrivier flows down the northern side of the hill unseen on the left (north) and flows into the Meulrivier just north of the first bridge. The Meulrivier joins up with the Koumarivier, which this pass crosses at the second bridge, and then has a name change at the confluence to the Palmietrivier, which itself has a name change to the Brandwagrivier, at the point where the Ruitersbosrivier joins the Palmietrivier. This bigger river, which later arrives at the sea with another local river - the Moordkuilrivier forms the Klein Brakrivier estuary and lagoon at the coastal town of the same name on the N2.

The hills are usually green and dairy, goat and sheep farms dominate the landscape. Obviously one should be aware that could be animals on the road around any corner. During the wet season, these roads can become muddy and slippery, when they are best driven in a 4WD vehicle. 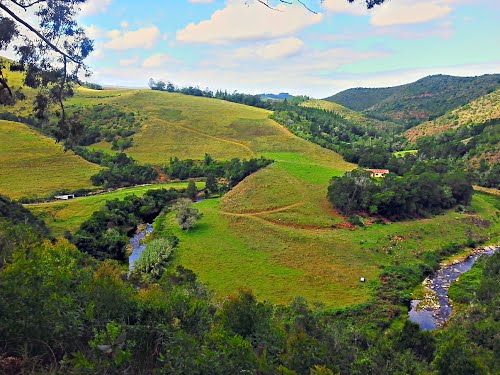 Stunning scenery along the pass / Photo: Deon v/d WesthuizenThe initial descent is just 800m long and is steep with a gradient of 1:6. At the bottom of this descent is a single width, low level, concrete bridge (which is subject to flooding) and immediately thereafter there is a T-junction. Turn left and follow the road as it climbs through a sweeping right hand curve up the next hillside at a gradient of 1:14. Soon after the farm house, there is another fork - keep right again towards the next ridge of hills.

At the 2,7 km mark, the slope eases off to 1:30 and the views along this ridge are exceptionally attractive as both sides of the valley can be viewed simultaneously. The middle (false) summit of 303m ASL is reached at the 4 km mark. The descent into the next river valley is the steepest with a gradient of 1:6 and last for 1,1 km and includes a very sharp semi-horseshoe bend halfway down. It's best to keep your speed slow here. The second descent ends at the crossing of the Kouma river at the 5,1 km mark.

The climb out of the eastern side of this valley is very steep at 1:5 and in wet weather light, front wheel drive vehicles will experience traction issues. 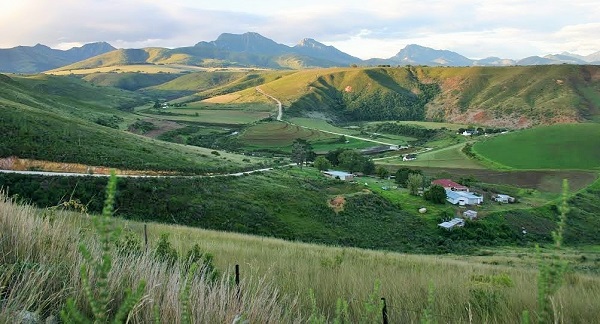 A perfect view of the second river valley / Photo: Across5ContinentsThe climb, although very steep, only has two relatively gentle corners. The steep part eases off abruptly at the 6,5 km mark as the road levels off for the final 700m to the true summit of 340m ASL.

This video was filmed during a particularly wet and gloomy weather cycle in October, 2012 as can be seen by the recently flooded bridges and roadways.  It is a scenically beautiful route and terminates 4,5 km after the eastern end of the pass at a T-Junction close to the Eight Bells Mountain Inn on the tarred R328. A further option is to turn left at that junction and take the R328 up and over the Robinson Pass to Oudsthoorn. Alternatively a right turn at the T-Junction will take you back towards the N2 and Mossel Bay.

This is one of those roads less travelled.

||Click to download: Hagelkraal Pass (Note - This is a .kmz file which can be opened in Google earth and most GPS software systems)

Published in The Western Cape
Tagged under
More in this category: « Gouna Pass (P1783) Swartrivier Pass (P355) - 7 Passes Road »
back to top