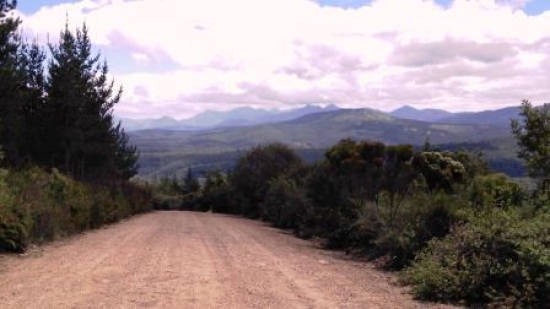 Scroll down to view the map & video. It is recommended to watch this video in HD. (Click on the "quality" button on the lower taskbar of the video screen and select 720HD). Wait a few seconds for the video to display.....

Getting there: To approach from the eastern side, (the direction in which we filmed it) head out of Knysna on the N2 and drive up the steep hill past Hornlee. At the crest of the big hill in the midst of the informal township, turn left onto the R339 marked Diepwalle and Uniondale. The road is initially tarred for the first 6 km then becomes gravel. Drive north for 16,8 km and turn left off the R339 onto Kom se Pad. Although it's clearly signposted, it's quite easy to miss the turn-off. 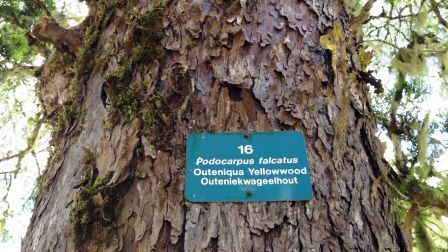 For those wanting to approach from the west, drive west out of Knysna along the N2 next to the Knysna Lagoon, following the signs to the Simola Golf Estate. Continue up a very steep tarred road until you get to the main entrance to Simola. At this high point there are three choices. Left goes into the estate; right follows the ridge through plantations known as Old Cape Road and eventually terminates in a T-junction on the tarred section of Prince Alfreds Pass. Continue straight down the hill in front of you to drive the Gouna Pass. Once you have completed the Gouna Pass, drive for a further 3 km to reach the Gouna forestry station, which also marks the western start of Kom se Pad.

Famous South African author, Daleen Matthee set her novel "Kringe in die Bos" (Circles in the Forest) in this area. It's easy to see why she was so moved by the atmosphere in these woods. The road traverses two sections of State forest - namely Diepwalle and Concordia.

The road is rough with corrugations, potholes and stones being the norm, so speed is not your friend. We strongly recommend tyre deflation to enjoy this drive without being shaken about too much. Deflate at least to 1,4 bar for a safer, softer ride, but remember to keep your speed below 80 kph once you get back on tar and reinflate at the earliest opportunity. 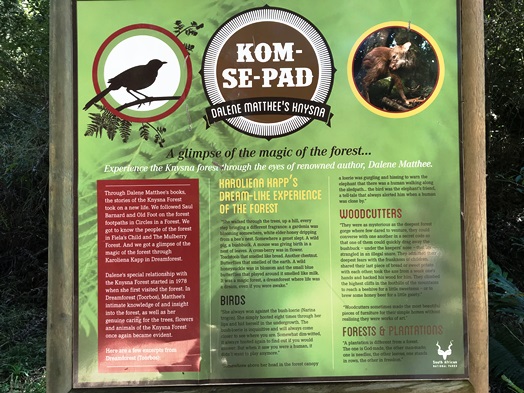 Signboard along the road telling the story of South African author Dalene MattheeKom se Pad is no doubt named after some legendary forester from the previous century, as are most of the tracks and tow paths through the forest.

The moment you turn off the R339, the road becomes narrower and rougher and immediately begins a steep descent towards the Gouna River crossing. Stop at the gate (which is usually open) and read the conditions of entry. Also note the special warning about logging trucks. The drivers of these big vehicles know these roads like the back of their hands and tend to drive too fast. Due to the dense foliage which mutes the sounds of vehicles approaching, these trucks approach suddenly and without warning. If you're driving Kom se Pad over a weekend or pubic holiday, meeting a logging truck is an unlikely scenario.

The road snakes its way down to the Gouna River through magnificent indigenous forests at a gradient of 1:10 and arrives at a very narrow bridge after 1 km. There is unfortunately nowhere to stop here and the road immediately begins ascending again up the western side of the valley. This ascent is a shared route with one of the three Elephant Hiking Trails, so be on the lookout for hikers. 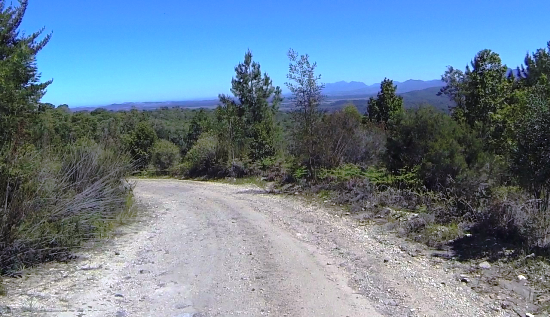 In the Garden Route region plants have always been harvested for a multitude of traditions, ranging from food cultivation to commodity manufacturing, to medical and spiritual practices. The wisdom of traditional medicines now meets modern medicine with increasing pace. Popular plants used in modern medicine include Wild Olive, African Wormwood, Geranium and general tonics like Bitter Aloe, Buchu and the Cancer Bush.

The secret to driving this road is to do it as slowly as possible and due to it's relatively easy gradients is extremely popular amongst the mountain biking set. The golden rule is: Slower is better. Hikers therefore see the most. The forests are jam packed with a variety of animals and birds and if you don't stop frequently and take in the sounds of the forests, you won't see much.

Once you have climbed out of the first valley, the road levels off and a small signboard on the right hand side of the road, tells the story of Kom se Pad and author Dalene Matthee's famous novel ' Kringe in die bos". Small streams cascade down the hillsides smothered in ferns as the dappled sunlight gives life to sights and sounds of the forests. Here in these dense forests it's hard to believe you are less than 11 km from Knysna and the N2 highway as the crow flies.

Other then two fairly steep sections at either end of the pass, the road is mostly of an undulating nature, but there are no shortage of bends, corners and curves on this road; in fact there are 99 of them! Many of these corners are blind and oncoming vehicles can appear suddenly, so driver's should always be aware of this and remain alert. If you are short of time, don't drive this road. This one is for the unhurried traveller and nature lover.

There are two sections near the western end of the route where the road climbs steeply and climbs out of the forest canopy, but these sections are short. In both cases the open terrain is due to planations having been harvested. The first is a false summit (470m) and the second one is the true summit of 493m. There is a four way intersection at the true summit with plenty of space to pull off the road to enjoy the amazing views. From this vantage point the views to the west and the south are magnificent.

The final descent once once again drops back into dense indigenous forests and at the 10 km mark the forests suddenly clear away to reveal a lovely picnic site called Grootdraai (Big Turn) so named as the road at this point forms a large horseshoe bend of 170 degrees. This is a very good spot to stop. 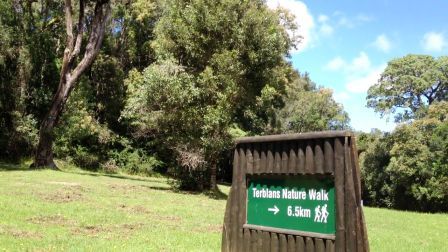 This is the starting point of the Terblans hiking trail and doubles as a picnic area. There are toilets and drinking water available. Further along the road, the Outeniqua Hiking Trail crosses over the road, visible by the standard green footprint signs.

Beyond Grootdraai, the heading resumes its westerly direction as the road descends gradually over the last 2 km to terminate at a T- Junction. Turn left and proceed for 3 km where you will arrive at the northern start of the Gouna Pass. It's a total of 10 km from the end of Kom se Pad back to Knysna.

The 11,9 kilometers will take you the best part of an hour to drive, excluding stops. Then you still need to get back to Knysna. So allow at least one and a half hour to do the complete circuit and longer if you want to picnic and make photo stops or walk.

We recommend this route, via the Gouna Pass as a preferable access route to join the Prince Alfreds Pass, as opposed to the traverse through the sprawling township on the eastern side of Knysna.

||Click to download: Kom se Pad  (Note - This is a .kmz file which can be opened in Google earth and most GPS software systems)

Published in The Western Cape
Tagged under
More in this category: « Swartrivier Pass (P355) - 7 Passes Road Kredouw Pass (R407) »
back to top