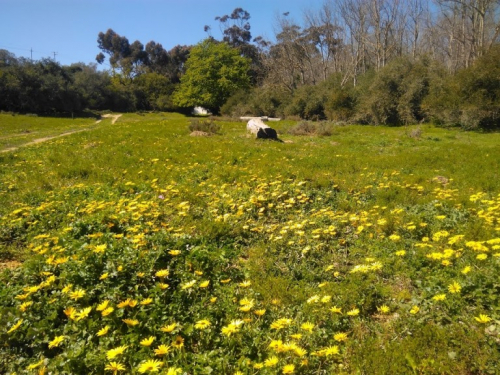 The Little Farm near the western start of the pass - Photo: Kevin Husk

Flouhoogte is a moderate pass on a gravel road in the Overberg not far from the sleepy town of Stanford. It has a classic vertical profile with a central summit point. There are only four gentle bends on this pass as it climbs 145m to summit at 215m directly opposite the Flouhoogte farmstead, which is where the pass takes its name from.

Translated from Afrikaans it literally means Weak Heights, but as is the case with translations, it can also mean Faint Heights. The latter is the more likely meaning as in the previous century it would have been hard work getting goods up that steep hill using wagons, oxen and mules.

The pass offers wonderful pastoral scenery of cultivated farmlands, with sweeping mountain views on the left, with the ocean sparkling just 25 km away to the right. This pass gives access to Kleinrivier Kloof Pass, Sandy's Glen and Groenkloof passes.

This is a provisional video consisting entirely of Google earth 3D animations, designed to orienteer drivers with the salient features of the pass. This pass will be filmed in real time in the near future. Scroll down to view the map & video. It is recommended to watch this video in HD. (Click on the "quality" button on the lower taskbar of the video screen and select 720HD.) Wait a few seconds for the video to display.....

To approach from the east is more complicated. There are several options available, but we only list the easiest and most direct approach here. from the coastal holiday village of Franskraal on the tarred R43, head north-east on a tarred road starting at GPS S34.600398 E19.408559. Drive for 7,8 km ignoring the intersection to the left to Uilenskraal and turn left (north) at GPS S34.573902 E19.478465. 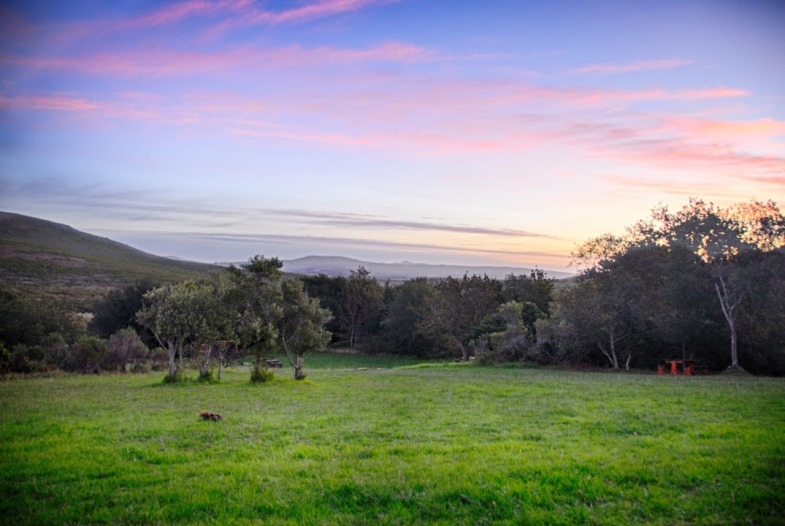 Follow this gravel road for 17 km (your landmark is a large irrigation dam on the right), until you reach a reversed fork at GPS S34.483116 E19.595242, where you must keep left. Drive north for 2,5 km to reach an intersection with a road leading off to the left. Take this turn at GPS S34.465100 E19.597346 and drive down to cross a low level bridge. This is also the eastern starting point of the Flouhoogte Pass.

Pass Description: Starting in the west at an altitude of 70m ASL at the crossing of a tributary of the Pietersrivier and adjacent to a smaller farm road leading away to the right, which leads to the farms, Nooitgedacht, Linkerhandsgat and Windheuvel, the ascent begins immediately up a long straight climb directly into the east. This entire climb falls within the boundaries of the Flouhoogte farm. The pitch gets progressively steeper as progress is made up the hill and it reaches its steepest gradient of 1:11 at the 1,6 km mark. 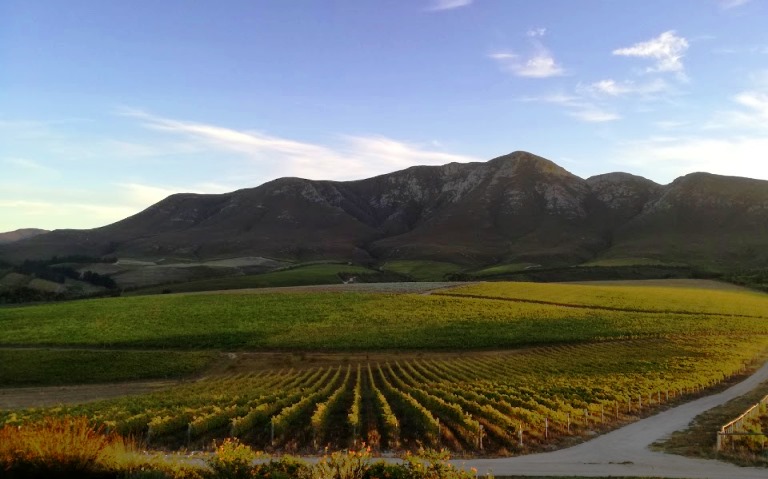 Brunia Wine Estate is just past the eastern end of the pass / Photo: Brunia Wines

As altitude is gained, so the views over the fields and farms open up and from the summit point it's possible to see the ocean off to the right on a clear day. The Flouhoogte farmstead lies in a small crook of the mountain off to the left and is accessed by a minor road to the left, which marks the summit point. A second road to the left at the summit, marks the southern start of the Kleinrivier Kloof Pass, which will get you back to the tarred R43 close to the western end of the Akkedisberg Pass. 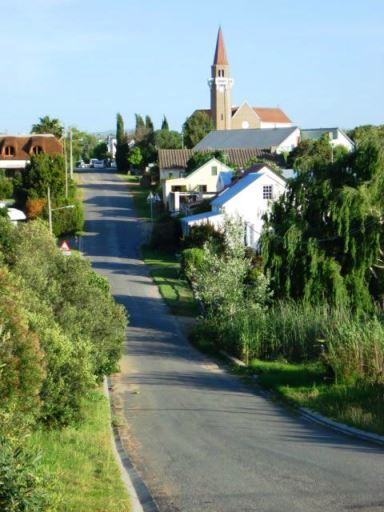 The eastern descent of Flouhoogte is more enjoyable and offers superior scenery to the ascent. The road gradually bends towards the right and the descent gets ever steeper as progress is made into the east. The views to the left are completely dominated by the towering mass of the Akkedisberg, which plays host to the popular Salmonsdam Nature Reserve. The access road to the reserve is to the left of the Flouhoogte Pass at the 3,6 km mark. It's a short drive of only a few kilometres to get there on a road which can vary between average to bad.

There's another minor kink in the road at the 4,3 km mark, from where the descent gradient eases off to around 1:20. Slow down at the 5,6 km point, where the road swings to the left and passes close by the farm buildings of the Willowdale farm, as there are often pedestrians and livestock on the road here.

The pass ends at the bridge crossing of the Uilenskraalrivier at an altitude of 90m ASL at the 6,2 km point. At the T-junction dead ahead, you have the option of turning left and following the road to the Sandy's Glen Pass, or you can turn right and take any number of roads, all of which will eventually lead to one of several coastal towns and villages like Franskraal, pearly Beach and Arniston.

||Click to download: Flouhoogte (Note - This is a .kmz file which can be opened in Google earth and most GPS software systems)

Published in The Western Cape
Tagged under
More in this category: « Piet Esterhuysen Pass (OP8062) Stettynskloof Pass (DR 01386) »
back to top