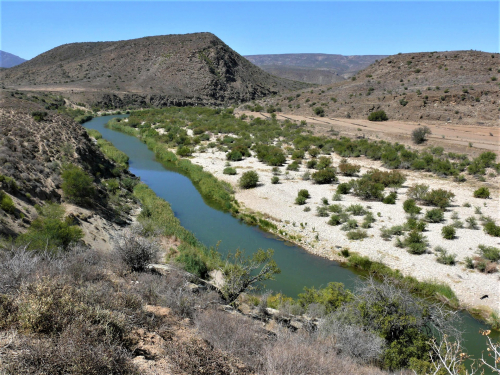 The Gouritz River is an interesting river which has caused farmers and road and rail builders many problems over the years. Its gorge is deep and wide, yet for most of the year it is dry and dormant, but when the rains come, this river can be savagely lethal. Both the Jan Muller and Uitspan passes cross the Gouritz by means of low level causeways. In times of flood, these crossings are extremely dangerous. If  there's a strong current running, it's better to retreat and use an alternative route. The crossings are wide and one wrong move and your vehicle could be washed off the causeway with disastrous consequences.

The Uitspan Pass is both a pass (at its western side) and a beautiful poort on its eastern side. It's 7.2 km long and contains 53 bends, corners and curves, many of which are extremely sharp, including 3 full hairpin bends. Although the average gradient is a mild 1:100, there are a few sections that get as steep as 1:6.

The pass can be driven in any high clearance vehicle in fair weather.

Getting there: To approach from the west (as we have filmed it), turn off the main gravel road between Calitzdorp and Vanwyksdorp near the southern end of the Rooiberg Pass and the eastern end of the Assegaaibosch Pass at GPS S33.737745 E21.598243. Follow this road eastwards for 16 km to arrive at the western start of the pass.

To approach from the east, turn NW off the R328 between Mossel Bay and Oudtshoorn at GPS S33.747544 E22.093451 (Signposted 'Armoed'). Drive northwards on tar for 10 km and turn left onto gravel at GPS S33.689257 E22.077174. Remain on this road heading generally in a westerly direction for 38 km to arrive at the eastern end of the pass. In the process you will need to drive each of the following passes sequentially from east to west: Perdebont Pass, Kleinfontein Poort and Kleinfontein Pass.

Description: The western starting point is easily identifiable by a solitary farm dwelling with a green roof on the right hand side of the road. There is also a gate adjacent to the farm house. This gate is usually open. The road initially heads briefly into the north-east for 200m, then swings abruptly to the right via a sharp 90 degree bend as the road follows a side stream of the Gouritz River into the south-east. The gradients are 1:6 down this first descent, so speed needs to moderated a lot, due to the steepness of the terrain and the effects of ruts and washaways (when it does rain). 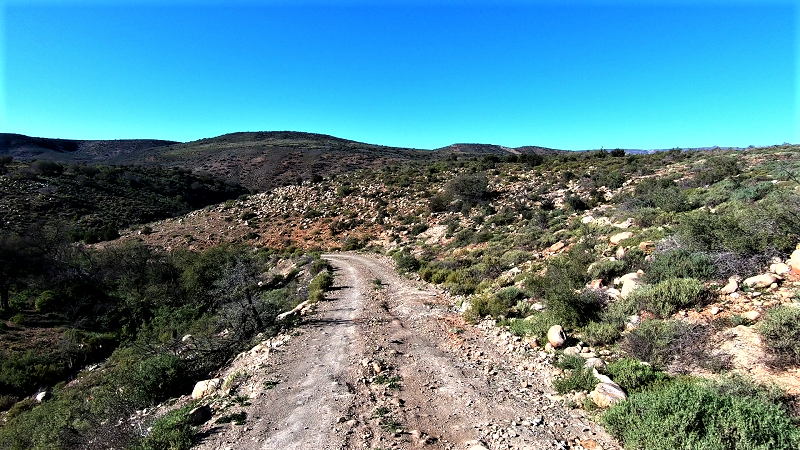 The initial descent to the Gouritz River. / Photo: MPSA

There's another 90 degree left hand bend at the 0.6 km mark, but the radius is easier. There are good views of the Gouritz River gorge to the right as the drops steadily down towards the first hairpin bend, which occurs at the 0.7 km mark. The radius is very tight on this bend (20 kph) and the direction is reversed by 170 degrees, with the road now paralleling the river. There are a few undulations along this section, before the road finally drops to cross the river at the 1.25k m mark at an elevation of 117m ASL.

The concreted causeway is rough and rudimentary at best. If the river is flowing strongly, turn around and find an alternative route. As is typical of rivers in the Karoo, they are generally shallow and wide and floods occur sporadically. If it's not raining as you approach the causeway, the river could still be in flood from higher upstream in the catchment area. For 95% of the time, the crossing will present no problems. 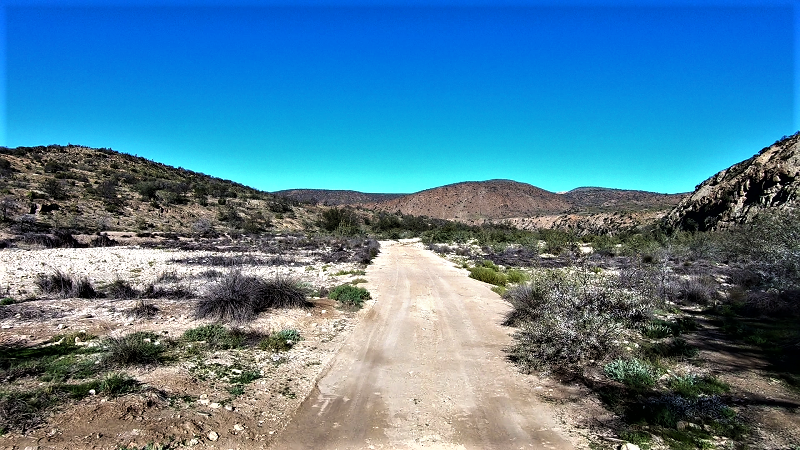 Once over the causeway, the road becomes a two spoor track with thousands of loose stones on either side as well as in 'middlemannetjie'. Watch out for sidewall cuts and banging any part of your vehicle's undercarriage along this section. At the 1.5 km mark, the road turns sharply to the left via a 160 bend and climbs steeply for 100m before turning through another sharp 160 degree bend to the right. The gradients level off here as the outbuildings of the Gouwsrivier farm appear on the right at the 2 km mark.

The road undulates again and reaches a false summit at the 2.7 km point, where it levels off and begins a lovely easy section through the next poort, where the road winds in and out of the buttresses and ravines, following two separate tributaries of the Gouritz River. 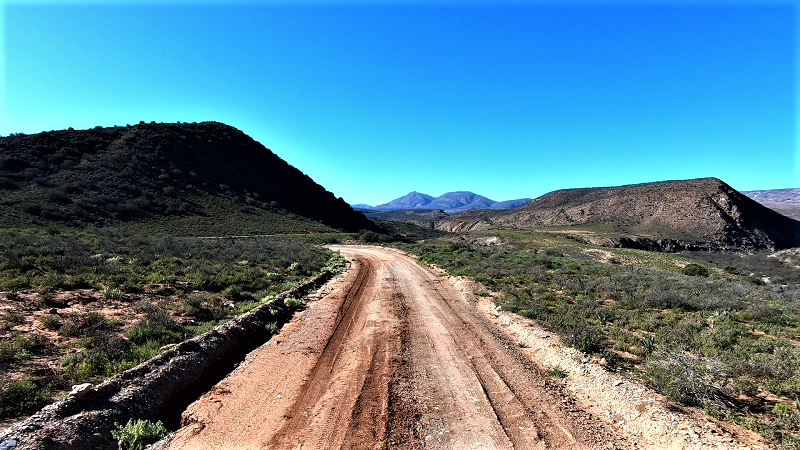 The point where the road changes from pass to poort / Photo: MPSA

The next section follows the course of the Rietvleirivier as it winds its way across the river bed four times via concreted drifts. These are all well-built, solid structures, but always remember that if the first drift looks dodgy in terms of water depth, it's only going to get worse and more dangerous. Rather retreat if these crossings are flowing too swiftly or too deep. The best test is to walk it first. There is no better way to gauge a potential threat to your life and that of your passengers. So many people have lost their lives by not being sensible. This is the Karoo and a torrent of brown water ahead of you will subside as quickly as it rose. Sit tight and see what happens. We have seen raging rivers subside by 1.5 metres in the space of an hour.

The final culvert occurs at the 6.2 km mark, where after the road climbs steeply out of the poort at a gradient of 1:10 to reach the summit point of 188m ASL at the 7.2 km point. Shortly after the  pass ends at its eastern side, you will be driving the Kleinfontein Pass & Poort as well as the Perdebont Pass on the same road. You will eventually pass the southern side of the Gamkasberg nature Reserve and reach the tar road after 38 km. Turn left to head towards the R62 (Oudtshoorn and Calitzdorp) or right to reach the R328 to reach Mossel Bay via the Robinson Pass.

||Click to download: Uitspan Pass (DR1649) - (Note - This is a .kmz file which can be opened in Google earth and most GPS software systems)

Published in The Western Cape
Tagged under
More in this category: « Perdebont Pass (DR1649)
back to top