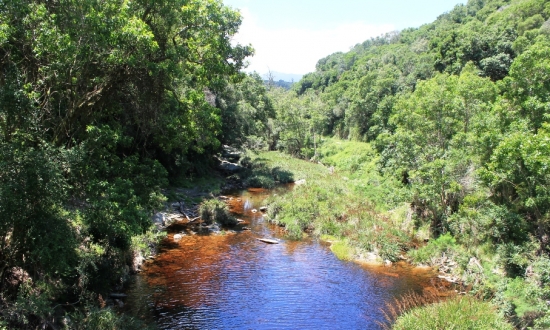 View from the Victorian bridge at Kaaimansgat - Photo: Trygve Roberts

The historic "Seven Passes" route between George and Knysna includes 'Kaaimansgat' - a twisting, turning tarred road, close to the town of George, which traverses lushly indigenous forest to this area's famous 'black water' rivers. The road is old, narrow and the tarring is in sub-standard condition, but the beautiful indigenous forests through which it passes more than makes up for this minor inconvenience. The pass has an old bridge (a national monument) worth stopping at.

Although the pass is fairly short at 2,8 km it has many sharp corners and drivers would be wise to keep their speed below 40 kph. The only safe place to stop as on either side of the bridge where there is limited parking for one or two vehicles.

Getting there: Historically the Kaaimansgat Pass was something of a nightmare for travellers with ox-wagons in the late 1800's, having to cross a steep and deep gorge across the Kaaiman's River - itself subject to frequent flash floods. Master road builder and engineer, Thomas Bain, took on the project of building a proper road between George and Knysna in 1867, which would include traversing 10 rivers and 7 gorges and would cover a distance of 75 kms. 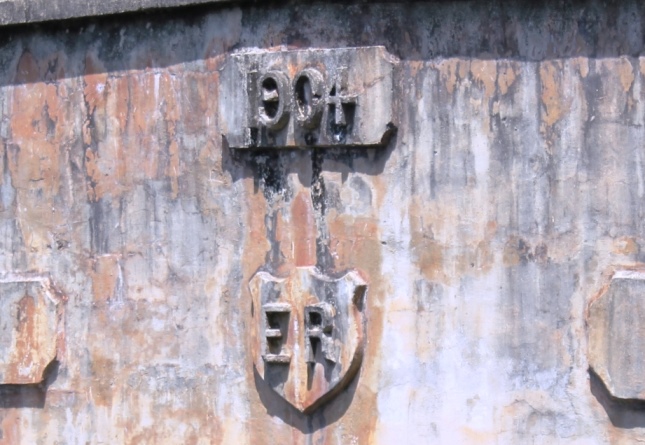 Bridge detail - Kaaimansgat / Photo: Trygve RobertsBain started at the Knysna end and left his brother in law, Adam de Smidt, to deal with the George side of the route. The pair disagreed vehemently about the routing of the road, which led to bitter acrimony and a lifelong "no speak" scenario. Despite this, De Smidt toiled away and produced a very good pass whch has stood the test of time. It was completed and opened to the public in 1869.

At first the rivers were crossed via stone drifts.By 1893 timber bridges were built over the Kaaimans and Silver Rivers. They were built from imported pine and tarred (to prolong their lifespan) and had sides which were 8 feet high and strongly resembled huge black coffins. The oxen baulked at having to cross these bridges and gave their drivers a torrid time. These pine bridges lasted less than 10 years and were replaced in 1902 by concrete bridges, utilising the same stone columns of the original timber bridges. These concrete bridges were declared national monuments in the 1970's. It is worthwhile stopping at the bridge and scrambling down the pathway for a good look at the old bridge which bears the date 1904 on it and the coat of arms of King Edward (ER). The road served as the main route between the two growing towns for 70 years, before the new national road (N2) was opened in 1952. The completed 7 Passes Road was handed over to the Divisional Council in 1887. 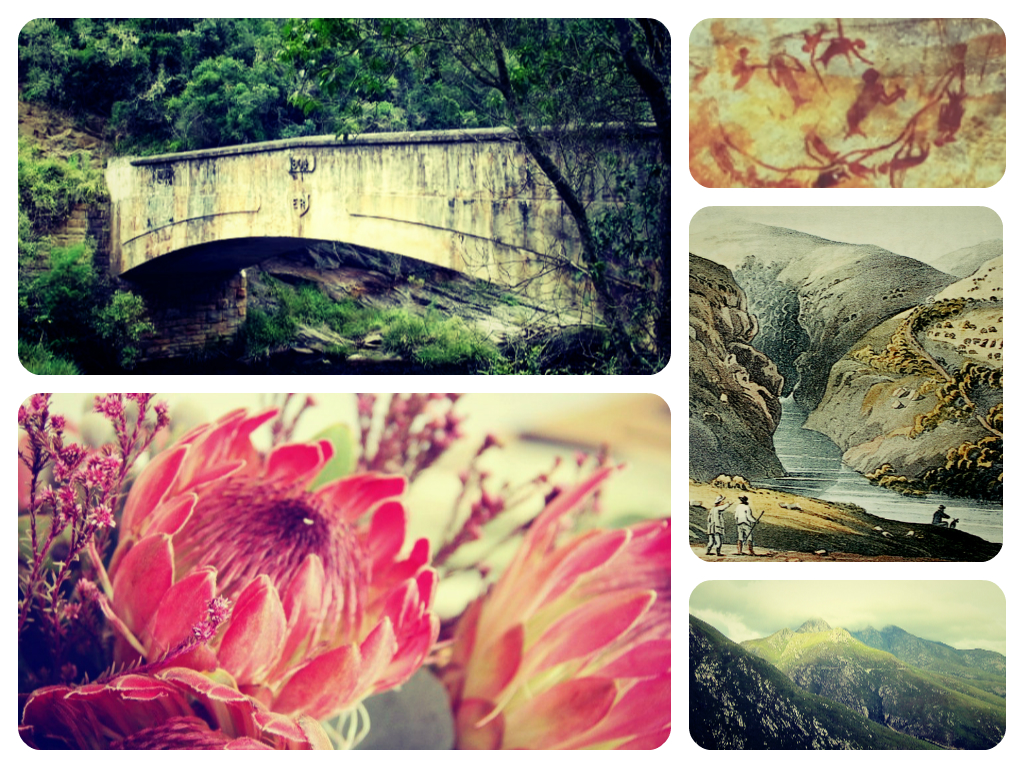 Why not visit the Big Tree at Woodville which is 800 years old and enjoy a short 30 minute circular route through beautiful indigenous forests.

Watch out for small antelope and baboons. Keep a look out for mountain bikers who frequent this road. Speed limit is 60 kph. The pass is tarred but not in great condition, so take it easy. It takes 10 minutes to drive the pass, excluding stops. It is suitable for most vehicles.  Be especially careful of locals who tend to drive very fast on this road and they tend to cut the corners, making the potential of a head on collision very real.

For ease of use, we have hyperlinked all the passes on this route. Hop to any pass by clicking on the relevant green hyperlink.

There is some confusion in respect of which the 7 Passes officially are. Research shows that there are in fact 8 passes: Starting from George in the West, they are:

Some references don't acknowledge the Black River Pass and others dont recognize the Silver River as a pass. The most common version is that the Silver River pass is technically part of the Kaaimansgat Pass. Early references show the Black River Pass to have been very challenging for ox-wagons, but the new modern tarred road almost leaves one with a sense that there is no pass there at all.

||Click to download: Kaaimansgat Pass (Note - This is a .gdb file which can be opened in most GPS software systems)