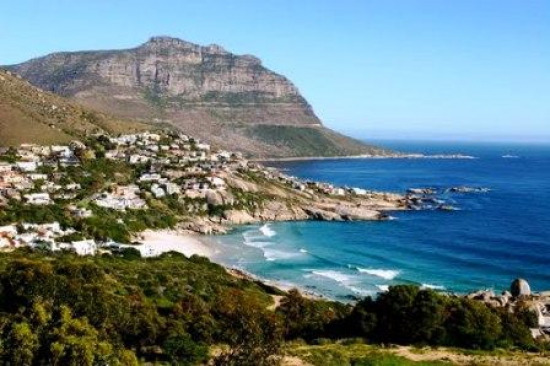 Victoria Road is a long road that stretches from Sea point all the way to Hout Bay. This lovely coastal road is featured several times on this website as it includes at least two passes in its total distance. This specific pass starts at the western end of Camps Bay at Bakoven and ends about 8,5 km later at the natural neck between the last buttress of the Twelve Apostles and Little Lions Head above Llandudno. It is a road which is appreciated and revered by locals and tourists alike and is well engineered with properly banked turns and smooth curves. It is a joy to drive, ride or cycle whilst offering fabulous views of the Atlantic coastline and the 12 Apostles.

Scroll down to view the map & video. It is recommended to watch this video in HD. (Click on the "quality" button on the lower taskbar of the video screen and select 720HD.)  Wait a few seconds for the video to display.....

History - When Rufane Donkin, the Acting Governor of the Cape, named the 12 Apostles in 1820, he must have had problems with his maths because this range has not twelve, but eighteen distinct buttresses. These are called (from north to south) Kloof, Fountain, Porcupine, Jubilee, Barrier, Valken, Kasteel, Postern, Wood, Spring, Slangolie, Corridor, Separation, Victoria, Grove, Llandudno Peak, Llandudno Corridor and the Hout Bay Corner. The sandstone cliffs of these so-called Twelve Apostles (in Camps Bay), have been sliced into blocks by numerous minor faults. 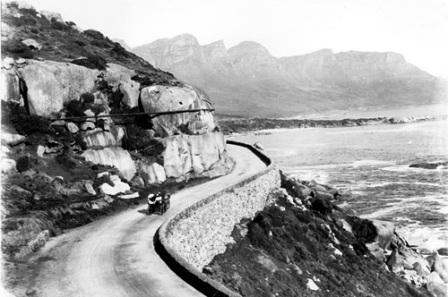 Victoria Road in 1889 - built by Thomas Bain / Photo: WikipediaThe large granite boulders that are a feature of Camps Bay are part of a huge subsurface rock mass whose limits lie far beyond the Peninsula. Formerly molten, it fractured as it cooled into the large blocks so visible along the shore. Over the aeons the Camps Bay wind has scoured the granite with the hard quartz grains until the south-east faces of the boulders at the north end of Camps Bay beach have become honeycombed, polished and grooved by the action of the wind and the sand.  The action of the waves can be seen in the granite headlands near Camps Bay which were cut by their force when the shoreline was 6 metres higher than it is at present. [Source: rentalsincapetown.com]

The coastal road was completed in 1887 by South Africa's most famous road engineer, Thomas Bain and named 'Victoria Road' to honour Queen Victoria's jubilee in 1888. This was also one of the last passes that Bain constructed.  Since then it has been upgraded and re-aligned several times. It starts on the outskirts of Camps Bay at Bakoven (so named after an outlying rock which looks like a baking oven on its side) and turns through a sharp S-bend as it hugs the coastline just a few meters above sea level. 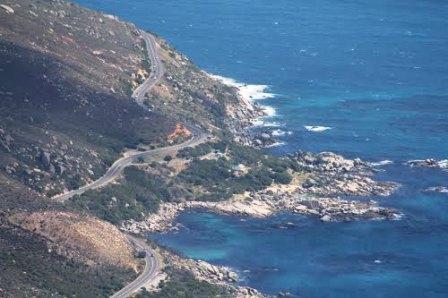 Victoria Road winding past Oudekraal / Photo: shailendrakamalThe road is generally in a good condition and has adequate safety shoulders for most of its length. On certain days you can smell the ozone coming off the sea, as the surf crashes amongst the rocks close to the road. The road heads in a south westerly direction towards Oudekraal, where there is still the remains of a shipwreck to be seen at low tide. This is the wreck of the Antipolis.

After a kilometer and a half there are some stone steps leading off to the left up the hillside. This leads to a Kramat (a holy Muslim grave site). After another 1,5 km the white buildings of the 12 Apostles Hotel and Spa make an appearance on the left. Up till this point the road remains just above sea level, but after the hotel, the ascent begins. The road rises through a right hand bend, then levels off briefly at the turn-off to Oudekraal. This is a lovely isolated spot set amongst milkwoods, boulders, rock pools and a small beach, which is a popular destination for locals. (See the history section on the origins of Oudekraal)

After Oudekraal, the road starts climbing in earnest, through a double S-curve as it turns more towards the south in sympathy with the contours of the mountain. Just before the turnoff to Llandudno is reached and completely out of sight on the hillside high above the traffic, is the Apostle Gun Battery - a series of big guns perfectly sited to protect the Cape dating back to a previous war. Nowadays the guns are all "rusting in peace"

A picture perfect photo of Victoria Road looking north with the Apostles dominating the skyline. Photo by jhkThe turn-off to the quiet seaside suburb of Llandudno comes up on the right and offers a fleeting view of a white beach surrounded by huge granite rocks, with rows of posh homes looking down on the idyllic scene. If you take a drive down through the suburb to the beach, you will be able to see the wreck of the Romelia which stranded on these rocks during a winter storm about 30 years ago when the tow-rope parted. The Romelia and Antipolis were being towed to the Far East as scrap metal. For naturalists, you can take a short walk from Llundudno to Sandy Bay and enjoy the sun for an all over tan without restrictions of clothing. (Uhmm... Take sunblock for the sensitive parts)

The road swings through another tight S-curve to summit at 172m ASL with wide views out over Hout Bay and Chapmans peak. The descent into Hout Bay is featured elsewhere on this website under "Suikerbossie/Victoria Road".

During the first Sunday of  March each year, Victoria Road is closed to traffic as 35,000 cyclists tackle the 105 km Argus Cycle Tour, which finishes along Victoria Road at Green Point. With views like this, it's no wonder they keep coming back for more!