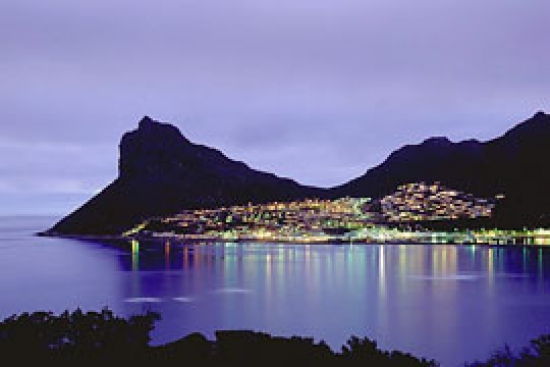 Taking away the emotion, it is a painfully straight climb with a few minor kinks in the road near the summit, but when ascending this 'hill' the gradient seems to get worse, the higher you climb. It is also mercilessly hot after 10 in the morning on Cycle Tour days, with no respite from the sun. On race day there are thousands of spectators cheering the cyclists up the hill. There is not a cyclist who has not been overwhelmed by the extraordinary atmosphere on Suikerbossie on race day. 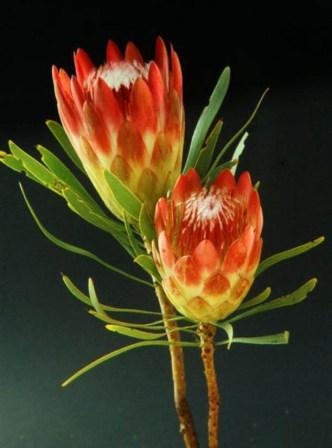 The 'Suikerbossie' or Cape Sugar Bush [Protea repens] / WikipediaThey train up this hill, year in and year out. The top cyclists ride up at an average speed of 35 kph, whilst the unfit walk up at 2 kph gasping for air. Technically, the pass is 2,08 km long and climbs 144m producing an average gradient of 1:14, with the steepest part being at 1:7

It get's its name from a restaurant near the summit of the same name, which in  turn gets its name from the Cape Sugar Bush (Suikerbossie). We filmed the pass on the descent for maximum scenic value. Starting frtom the neck at Suikerbossie at an altitude of 172m ASL, the pass starts descending towards Hout Bay through two gentle S-curves. Views from the neck are wide, with the Constantiaberg dominating the skyline to the left. Dead ahead is the village of Hout Bay with its wide, golden beach and of course, Chapmans Peak Drive beckons further to the south, beyond the blue waters of the bay. At the neck you will often find groups of cyclists taking a breather, swopping war stories and enjoying the views.

The road is three lanes wide all the way to the traffic lights at the bottom of the hill. Cyclists regularly attain speeds in excess of 80 kph down this hill. After the initial S-bends, the road straightens out, revealing a very long descent into Hout Bay with a slight bias towards the right. Soon you will pass the turn-off to Mount Rhodes on your right. After another 1,5 km of descending, the 'pass' terminates at the traffic lights. Make sure you comply with the speed restriction, as there is camera speed monitoring in place.  If you continue straight on you will arrive in the heart of the village of Hout Bay with its popular harbour area and safe beach (that's if you can handle a sea temperature of 10C!) 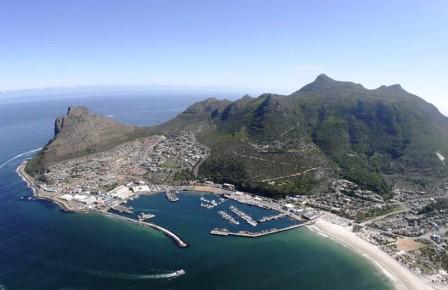 Aerial view of Hout Bay with the harbour, the Sentinel (left) and Karbonkelberg / Photo: AJ DigitalA left turn will take you towards a bridge along a shady oak lined street. Just before the bridge a road leads off to the left, where you can access the world renowned 'World of Birds'. Continuing straight on for a further 300 meters will get you to a traffic circle, where you have the option of turnng left up to Constantia Nek, or a right turn will take you to another commercial part of Hout Bay as well as put you on the right road to Chapmans Peak.

When the Dutch established a colony in Table Bay in 1652, a great quantity of good timber was required for construction, shipbuilding other purposes. There was no large forest in the immediate vicinity of the settlement, mainly because the rainfall was not high enough. It was soon apparent that the colonists would be able to fell wood they needed in the wetter valley that lay on the other side of a low pass (called Constantia Nek) between the southern end of Table Mountain and Constantiaberg. The area was originally made up of two farms, which were slowly subdivided to make way for urban expansion. While still maintaining its rural atmosphere, the area of Hout Bay has more than 12,000 residences inhabited by a population of about 42,000 people. 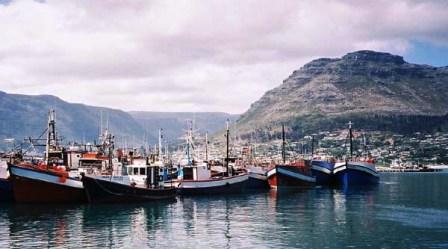 Colourful fishing boats in Hout Bay Harbour / Photo: WikipediaHout Bay is surrounded by mountains to the north, east and west and the southern Atlantic Ocean to the south. In the north, it is bordered by Table Mountain National Park comprising the Orangekloof Nature reserve and the bottom slopes of Table Mountain beyond that. To the north-west, it is bordered by the backside of the Twelve Apostles, known as the Oranjekloof. To the west, it is bordered by Little Lion's Head (Klein Leeukop), Karbonkelberg, Kaptein's Peak and the Sentinel. To the east it is bordered by the Vlakkenberg, Skoorsteenskopberg and Constantiaberg. The world famous Chapman's Peak Drive is carved out of the mountainside and leads towards Noordhoek and onwards to Cape Point.

Published in The Western Cape
Tagged under
More in this category: « Victoria Road / 12 Apostles (Cape Town) Constantia Nek (Cape Town) »
back to top