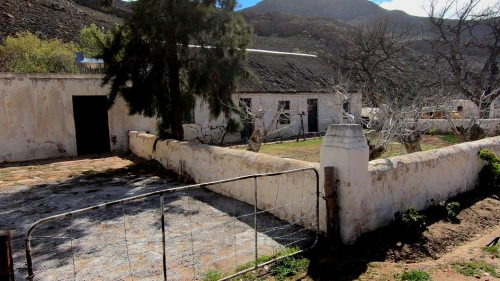 The farmstead Karoopoort is a national monument - Photo: Trygve Roberts

Scroll down to view the map & video. It is recommended to watch this video in HD. (Click on the "quality" button on the lower taskbar of the video screen and select 720HD.)  Wait a few seconds for the video to display.....

Getting there: To approach from the east, (as we have filmed it) the poort can be accessed either via the R355 from Calvinia (200 km) or the R356 from Sutherland (160 km). Where these two roads intersect, marks the eastern start of the Karoopoort.

To approach from the west, drive along the R46 from Ceres over the Theronsberg Pass followed by the Hottentotskloof Pass (33 km). Continue for a further 7 km where the R46 intersects with the R355. This is also the point where the tar ends and other than a very short tar section, it's gravel throughout the poort. 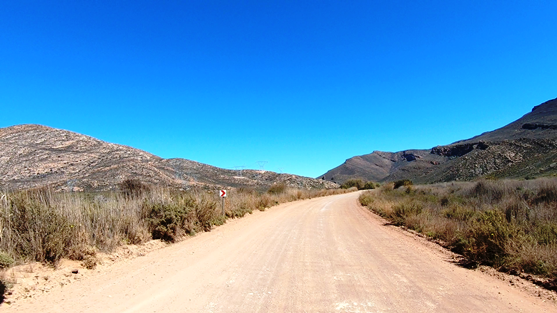 Saalberg on the left and Ghwarrieberg on the right / Photo: Trygve Roberts
The natural poort is located between the Kwarrieberge [1437m] (originally Guarrieberg) on the right (north) and Saalberg [1322m] to the left. Both of these mountains are clearly visible ahead as the poort is approached from the Tankwa and Ceres Karoo side. After hundreds of kilometres of flat plains, the looming mountains are a beacon of geopgraphical change and your entry into the more mountainous part of the Western Cape.

The condition of the road along the eastern side of the poort is almost always rough, potholed and corrugated and usually requires a reduction in speed. The road turns progressively through a slow, wide turn to the right, following the curve of the mountainside displaying a few moderate cuttings on the right. To the left the only sign of the river is a small belt of greenery. 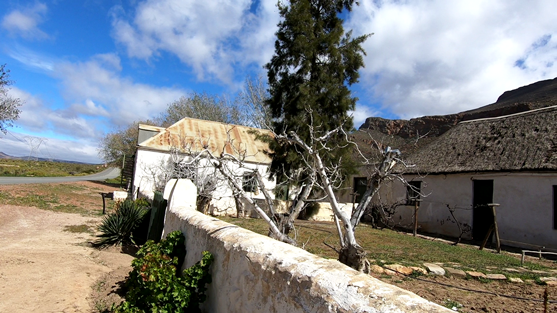 At the 1,8 km point, the road straightens out and becomes tar. It's fairly obvious that this smal portion of the R355 was tarred to protect the fruit from dust. Orchards line both sides of the road bringing a welcome change of greenery into view. Although this farm is very old dating back to the 1700's, it is still a working farm, so be on the lookout for farm vehicles, pedestrians and livestock. The Doring River which the road follows is seldom more than a trickle, but it has been a life-line of water for the old Karoopoort farm.

There's a slight bend towards the left at the 2,7 km point and the old farmstead appears graciously on the right 200m later. Make sure you pull completely off the road, if you intend stopping for photos or just to admire the old buildings. The best place to stop is on the northern side in front of the farm house, where there is enough space for five or six vehicles. 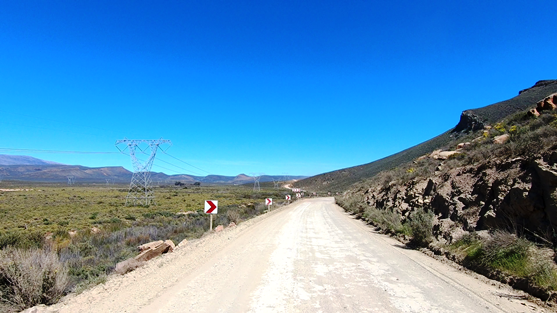 The original farmhouse has the typical half metre thick stone walls painted white and bedecked with local thatch. During winter a wisp of smoke is usually trailing from the chimney indicating that the home is inhabited. A bronze plaque on the front door marks it as a national monument. A double story shed like structure with a corrugated iron roof stands right next to the farm house and whilst this is not as old as the house, it still dates back to at least the early 1900's. The whole setting is particularly attractive with the backdrop of towering and rugged mountains and the farmstead nestled in a small oasis of trees with running water.

The road continues bending gradually to the left until the heading settles down into the south-west. The tar gives way to gravel at the 3,3 km mark with large electricity pylons appearing on the left. These pylons gradually converge closer to the road as distance is gained westwards.

This second half of the poort is more technical and contains many more corners as well as steeper gradients. From the 4th km to the 5th km a series of curves have to be negotiated. These have been adequately signposted with chevron boards to warn drivers. It's best to slow down considerably as you negotiate this section. 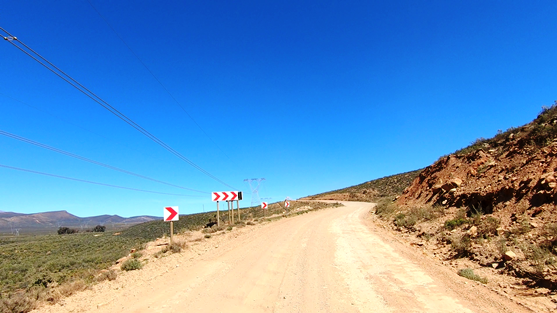 The steepest part of the poort at 4,5 km point / Photo: Trygve Roberts

It is particularly hazardous when other vehicles approach and dense dust is created, reducing visibility - and more so if there is no wind present to clear the dust. Likewise this section can be slippery and dangerous after rain with corrugations and potholes waiting for the unwary. There have been a number of accidents here, so pay attention to the warning signs.

The last 800m sees the road climbing at it's steepest gradient of around 1:15 as the road straightens out towards the end of the poort, which is marked by the end of the gravel. Turn left to get to the N1 via Die Venster (36 km) near the summit of the Hexrivier Pass, or continue straight on to reach Ceres via the Hottentotskloof and Theronsberg passes. If you want an alternative route to Ceres, why not try the more southerly option via the Bo-Swaarmoed and Swaarmoed passes, which also provide access to Matroosberg and the Klondyke cherry farm. Use the hyperlinks to obtain accurate directions for each.

If you're driving this poort in the opposite direction (towards Calvinia), you could return to Cape Town via the Peerboomskloof, Katbakkies, Gydo and Michell passes as a superb circular route in the process traversing magnificent scenery and outstanding mountain passes filled with history. Just north of the turn-off to Katbakkies and Peerboomskloof is the well known and quirky Tankwa Padstal which is well worth a visit.

Watch a short video below on the Tankwa Padstal.

Note that the R355 and some other gravel roads in the Tankwa Karoo have something of a reputation for destroying tyres. This is caused by sharp shards being thrown from the RF wheel towards the LR wheel caused by road camber - the  LR tyre is the one where the majority of tyre failures occur. The solution is to drive in the middle of the road where there is negative camber. This hot tip was originally given to us by Johan Viljoen, owner of 1st Alignment Centre in the Western Cape. We follow this advice in the Tankwa and have never experienced tyre failure there. It works!

||Click to download: Karoo Poort (R355) Note - this is .kmz file and can be opened in Google Earth as well as most GPS software systems.

Published in The Western Cape
Tagged under
More in this category: « Hoekwil Pass, Wilderness Allemanshoek Pass »
back to top