This excellent new pass connects the university town of Stellenbosch with the R45, Pniel and Franschoek and is designated as route R310. The pass has been upgraded several times, with the old pass (also tarred) traversing in a much more complex route of twists and turns to the  northern side of the current pass. The old pass can still be accessed on foot or on bicycle. To be fair, the old pass was far more scenic than the new pass - that is the price of progress. Not that the scenery from the new pass is in any way poor of course!

Getting there: Drive through Stellenbosch towards Jonkershoek and Idas valley on the Helshoogte Road. The pass starts just after the last set of traffic lights.

Helshoogte is one of the oldest in South Africa, and dates back to 1854. It traverses the Jonkershoek and Simonsberg mountains, connecting Stellenbosch with Franschhoek, Paarl and the Drakenstein Valley, via the small missionary settlement of Pniel. 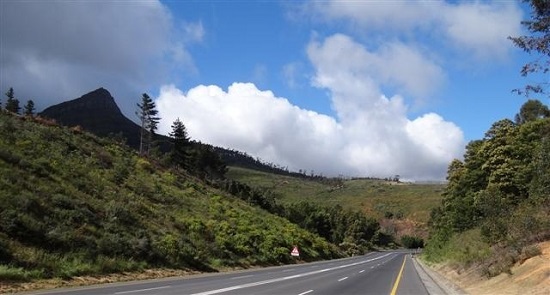 The ascent is long and full of perfectly banked curves / PanoramioHistorical records show that elephants were the first to make the trek over the
dangerous mountains and into the shadowy valley known as Banghoek. The original Banghoek Pass was used as early as 1708. Over the years the “g” was dropped from the Banghoek name, and it became simply known as Banhoek which
is still in use today.

In later years the summit of the pass became a lookout point for ships arriving in Table bay. The pass then became known as Botmanskop, which translates into 'Boat Man’s Head'. In 1688 the French Hugenotes arrived to start wine farming in the Franschhoek Valley a few kilometres to the north-east of the pass.

Parts of the new road utilise the old Banghoek Pass, so named in earlier times when wild animals were known to scare local travellers witless!  The old pass is still there but is closed off where it connects with the new pass and is no longer accessible to vehicles. The new pass is a favourite with bikers for its smooth banked turns and high-speed capability, enjoying the 'breakfast run' to Franschoek. 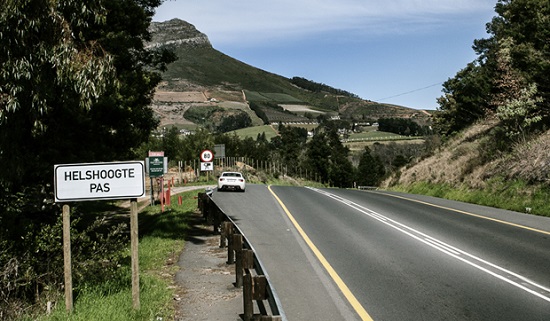 The Tokara wine estate is to the left at the summit / PanoramioThe old pass was first tarred in 1936 and was upgraded and improved to a new line with improved geometric standards in 1966. In 2010 the pass received a major face-lift into the multi-lane road that we use today.

Keep a look out for cyclists who regularly use the pass as training route, mainly for its good gradients, smooth surface and sublime views, but also for the safety of the emergency lane which runs for almost the entire length of the pass.

Visually the pass is magnificent with the road being surrounded by densely wooded valleys, neat vineyards and towering mountains.

Our video was filmed from east to west. Starting in Stellenbosch take the R310 out of town. The ascent of the Helshoogte Pass begins almost immediately with a long, straight climb up the hill at a steady gradient of 1:11 on a modern 4 lane carriageway. The speed limit of 80 kph is enforced by camera. After 1,65 km the road swings away to the left and enters a set of double S curves which are perfectly banked for speed. The views open up nicely with vistas of the Stellenbosch valley and the odd glimpse of the blue waters of the Idas Valley dam. 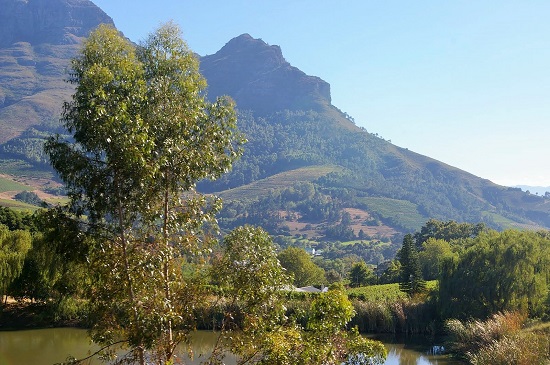 A landscape perfect for wine farming / Stellenbosch TourismThe summit of 387m is reached at the end of the second S-curve at the entrance to the upmarket Tokara wine estate with its ultra modern buildings, cellar and restaurant and exquisite views over the valley.

From the summit, the descent begins at a gradient of 1:14, then gets progressively steeper as the road swings into a 90 degree left hand bend to straighten out into the north-east. The road passes through some of the most expensive wine farms in South Africa and is surrounded by towering peaks and lush, green valleys peppered with inky-blue irrigation dams.

The views are quite beautiful here of the Simonsberg and famous wineries from mountain to mountain. The Zorgvliet farmstead appears on the left halfway down the long, straight descent. At the bottom of the hill the road levels off before the final approach into the settlement of Pniel, where the pass ends.
.
Pniel lies in a quiet valley surrounded by vineyards and tall mountains and was originally established as a mission settlement for the landless and homeless slaves, who had been released after slavery was abolished in the Cape in 1842.

Near the bottom of the pass at its eastern side you’ll pass tiny settlements like Kylemore and Johannesdal.

||Click to download: Helshoogte (R310)   (Note - This is a .kmz file which can be opened in Google earth and most GPS software systems)

Published in The Western Cape
Tagged under
More in this category: « Akkedisberg Pass (R326) Attaquaskloof (Old ox-wagon route) »
back to top