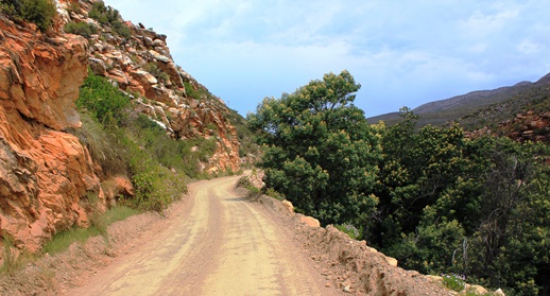 This fairly short poort routes through a clear gap in the mountains just north of Heroldt and forms a natural northerly extension to the historicial Montagu Pass on an easy traverse towards Oudtshoorn. This little poort seems to have been forgotten and completely dominated by the grandeur of the Montagu Pass, but a closer look at the Paardepoort (The Pass of Horses), reveals an old road, built in similar style to Bain's work of the late 1800's, which can be clearly seen on the opposite side of the poort with substantial retaining walls still adequately propping the old road up, above the river.

Once the Montagu Pass had been completed in 1847, convicts whom had worked on the Montagu Pass, were transferred to Paardepoort, where an obvious path through the mountains and long since used by horsemen, was a natural progression of the Montagu pass northwards to Oudtshoorn. The original road on the western bank of the Doring River was only one lane wide, but it did offer passing opportunities and boasted a gentle gradient. The lovely old road is propped up by dry-packed stone walls on the river side with some rock cuts on the mountain side. The road was opened in 1850. Over time, the road carried increased traffic after diamonds were discovered in Kimberley circa 1870. The new road on the eastern bank of the poort was built in in the 1930's offering a safer, wider road. It seems unlikely that Thomas bain was the builder of this road, as he would have been just 14 years old at the time of construction. History records show that bain served his apprenticeship under his father from 1848 to 1854 whilst assisting with the construction of the Michells and Bainskloof passes in Ceres and Wellington respectively.

The poort, which is just under 5km in length, forms a natural path northwards.As is typical of the easy gradients associated with most poorts, this one averages out at a very easy 1:77, making it enjoyable for walkers and cyclists alike. We filmed the poort from north to south, for no other reason than that was the direction we were travelling. It is equally attractive from either direction. 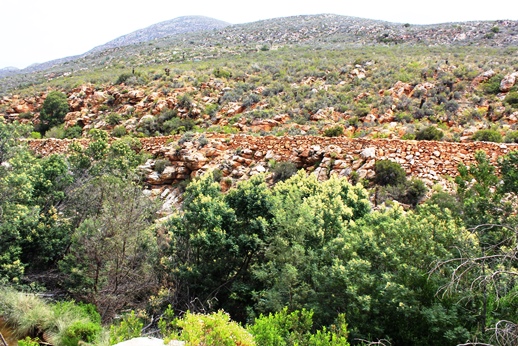 The old Paardepoort road still intact since 1850 on the far side of the poort / Photo: Trygve RobertsApproaching from the north at a four way intersection on the gravel road marked P1646 opposite the farm Diemersrivier, the road heads southwards towards towards a clear break in the mountains. This section is fairly level and the road forms a wide right hand loop of about 2,5km before it enters the Paardepoort proper. Many maps also refer to this pass as Perdepoort Pass (a more colloquail Afrikaans version). It should be noted that there is another Paardepoort Pass in the Eastern Cape, which is a tarred pass.

As the road curves to the left at the northern end of the poort, the scenery and vegetation change suddenly, with the life giving waters of the Doring River (which sources at the top of the Outeniqua pass and flows northwards) providing greenery along the poort. The poort is narrow and restrictive and is probably the only reason this was not kept as the main route through to Oudsthoorn as it is infinitely more comfortable in terms of terrain and gradient than the modern, tarred N12, which involves several big climbs and at least one substantial pass. 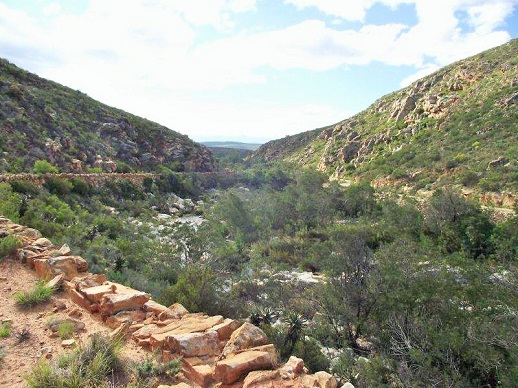 Looking north from the 1850 road over the river with the new 1930 road visible on the right / Photo: Knysna Historical SocietyThe rampant explosion of Black Wattle (an Australian invasive species) has smothered this beautiful poort and like many parts of the Little Karoo and Langkloof, this has become a huge problem. Within 200m of entering the poort, a glance over to the opposite bank, reveals substantial dry packed stone walls suppporting an old road. This was the original road and was built by Thomas Bain's team once the Montagu Pass had been completed. For those wanting to have a closer look at the old road, you will need to get your feet wet, and cross the river on foot to scramble up the opposite bank, but be careful where you leave your vehicle, as there are no parking areas along this road.

The old road can be accessed via the northern end via the Diemersrivier farm, but permission from the farm owner will be required. The more modern version of the road has been blasted out of the rockface and still remains fairly narrow, but not nearly as narrow as the Montagu Pass. The scenery is pleasant as the road meanders next to the river, faithfully copying its course for several kilometers. When travelling from the north, you will be ascending the poort. At its southern end, the poort opens up onto the wide plain of the Langkloof, with the towering Outeniqua mountains dominating the skyline ahead. It's a further 1,5 km of flat driving from the poort exit, where the road forms a T-junction with the tarred N9.

Looking northwards along the 1930 and current version of the pass / Photo: Trygve RobertsThe more modern version of the road has been blasted out of the rockface and still remains fairly narrow, but not nearly as narrow as the Montagu Pass. The scenery is pleasant as the road meanders next to the river, faithfully copying its course for several kilometers. When travelling from the north, you will be ascending the poort. At its southern end, the poort opens up onto the wide plain of the Langkloof, with the towering Outeniqua mountains dominating the skyline ahead. It's a further 1,5 km of flat driving from the poort exit, where the road forms a T-junction with the tarred N9.

Here you have several options, depending on your destination. If you are heading for George, carry straight on over the N9 via a short dog-leg intersection and head for Heroldt via the Montagu Pass - a slow and beautiful gravel drive and a 'must do' for this area. Alternatively, you can turn right and head west to descend to George via the Outeniqua Pass, which is a wide, modern, tarred pass. 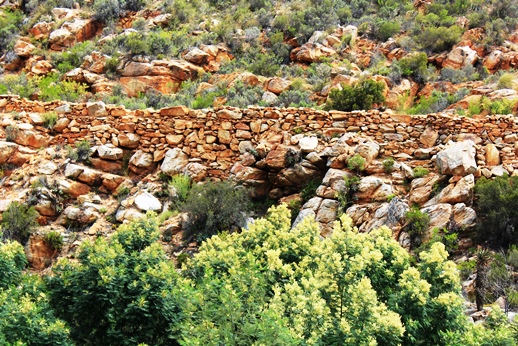 Published in The Western Cape
Tagged under
More in this category: « Eseljagpoort (P1648) Wapadsnek (P1662) »
back to top