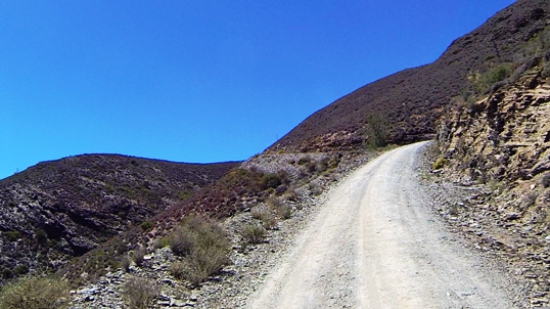 The Koebee Pass is gravel, rough, steep and spectacular. Most of the ascent will be driven in 1st and 2nd gear. You don't need a 4WD vehicle to complete the pass, but it is an advantage. Ground clearance can be an issue with cars that are low slung. The pass rises up from the famous Knersvlakte and descends to the Koebee River valley where it splits into two directions, both ending in dead-ends at farms along the Koebee River. The scenery is quite beautiful for those who think this northern part of the Western Cape is a barren wasteland. The pass lies very close to the border between the Western and Northern Cape near the Oorlogskloof Nature Reserve.

Getting there: From Vanrhynsdorp head north-east on the tarred R27 to Nieuwoudtville for 8km. Take the turn-off to the right (east) marked "Koebee" at GPS S31.567896 E18.806696. Follow this arrow straight gravel road for 14 km where the road passes a cattle grid. This point also marks the start of the Koebee Pass. There are three different spellings of the name: Koebee (official maps); Kobee (some road-signs) and Koobee (some lesser maps). The pass is named after the Koebee River to where the pass heads some 12 km distant to the south-east. 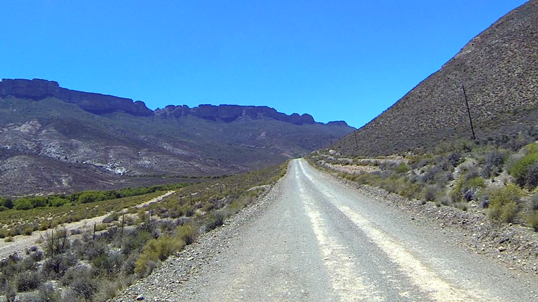 Photo: The start of the Koebee Pass at the entrance to the gorge / Trygve RobertsWe have produced three videos of this lovely pass. Part 1 deals with the ascent (west to east). Part 2 deals with the descent towards the south-east to the Koebee River, which is much less dramatic than the other two. Part 3 covers the descent from the summit heading back to the west, which offers fabulous scenery.

This pass is doable in a normal car, with the exception of cars with low ground clearance. It is very steep in places, requiring gear changes to 1st and 2nd gear for much of the climb up, but low range and 4WD is not a necessity, although always an advantage.

After a long, straight and dusty pull over the Knersvlakte, one arrives at a cattle grid opposite the farm De-Hoop and this point marks the entry into the deep cleft into the Bokkeveld mountains and the western start of the Koebee Pass. the Knersvlakte itself is easy to overlook, but if you take time to stop and examine the minute succulents hidden amongst the quartzite gravel, you will discover a wonderful world of biodiversity.

The Knersvlakte, is a particularly fascinating portion of that well-known biodiversity hotspot, the Succulent Karoo. Sprawling roughly between the towns of Vanrhynsdorp and Bitterfontein, the Knersvlakte’s characteristic white quartzite gravel conceals plants with an indomitable instinct for survival. There are dwarf mesembryanthemums in the Knersvlakte that only open their seed capsules when raindrops fall on them. 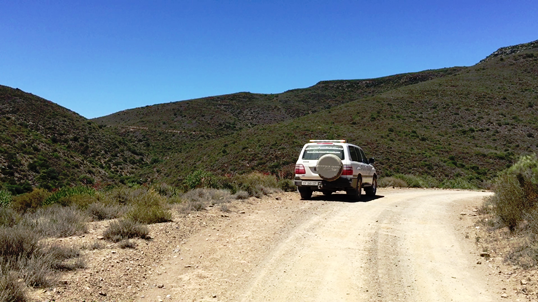 Photo: Just after the second cattle grid, the road is wide enough to pull over and enjoy the awesome scenery / Trygve RobertsIt is a world of miniature succulent plants, sheltered from the worst of the summer heat (from December to February) by the reflective quartz gravel. Knersvlakte means gnashing, or grinding, plains. Opinion is divided about whether this refers to the difficulty of crossing the plains in an ox wagon (and the attendant gnashing or gritting of teeth), or the crunching noise made by iron wheels on quartzite gravel. These are just two theories about how this inhospitable place got its name.

Here you will find plants with names as cute as they look: 'Baby bums', 'Donkey ears', 'Little buttons', 'Fingers-and-thumbs'. Some look like tiny green marbles, others like flowering pebbles. Others emerge above the soil only during the temperate spring and retreat back into the soil, almost invisible, when the summer heat arrives. Experts say these plants are extremely vulnerable to climate change and a number of strategies are being explored to safeguard them. 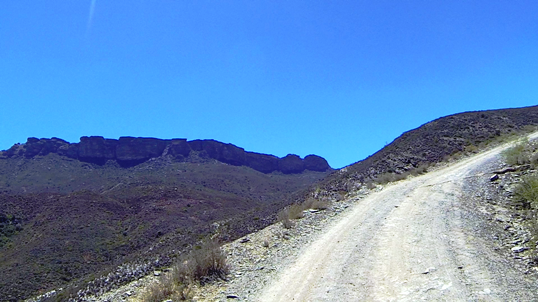 Not surprisingly, a large section of this botanically rich area is on the verge of being proclaimed a nature reserve by Cape Nature. A conservation manager, based in Vanrhynsdorp, is available to give information on the area.

The first section of the pass is to all intents and purposes merely an access road and maintains a steady direction and altitude for 4 kilometers. A long mountain appears to stretch directly in front of the road with unusual, almost vertical ridges near the summit.  This is the Bokkeveldberg range which runs from NNW to SSE. Some maps also label sections of this range as Tiger Berg or Tierberg. The Tierberg range forms a separate mountain behind the one in view to your left (out of sight) and forms a V formation with the Bokkevelberge. These can be reached via an extreme pass, called (appropriately) Tierberg Pass, which can be accessed from the summit of the Koebee Pass, but it should be noted this is only for 4WD vehicles with good clearance and low range. It is featured elsewhere on this website. (Click the blue hyperlink to access it) 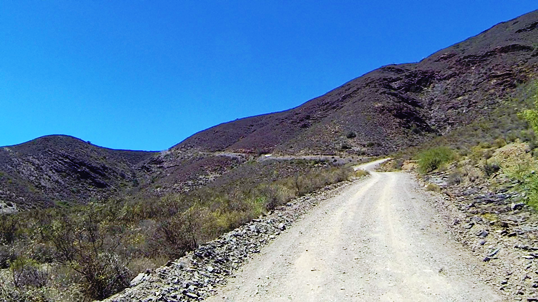 Photo: The second half of the ascent has a slightly easier gradient / Trygve RobertsThe deep valley ahead is flanked on the right hand side (west) by a long, flat topped mountain called Leeustert (Lions Tail) which has a distinctively shaped peak at its northern extremity with a summit altitude of 887m. A smaller peak lies close to the start on the right known as Krimpsiekkop. After 4km of travelling along the southern bank of the river, the road starts ascending up the right hand side of the valley. The ascent is not only very steep, but the road is peppered with sharp corners - 18 of them in total!

Some of the corners are negotiated only to find a very steep section immediately after the bend, frequently requiring a change to 1st gear. Due to the rugged nature of the road and the many corners, speed is by necessity low and most of the ascent will be in 1st or 2nd gear. The ascent can be devided into two distinct sections with a short, level section about halfway up just after a gate and cattle grid. There is enough space for one or two vehicles to stop and enjoy the dramatic scenery. The two distinct peaks can both be seen clearly from here, with the Tierberg peak a bit further away to the left. The jumble of hills ahead and to the left are aptly called Rondekoppe.(Round Peaks)

The second part of the ascent is less steep but no less convoluted. Another 8 sharp corners need to be negotiated of which one is a hairpin bend of 150 degrees. The last leg of the climb is directly into the south-east where the pass summits at a natural neck where two battered and weathered sign boards show the gated road to the left to "Tierberg" and the other indicates the summit of the Kobee Pass. Take a breather here and savour the wide expanse of scenery all around you. The mind-boggling steepness of the road leading up to Tierberg leaves no doubt that it is not for the average vehicle or driver. 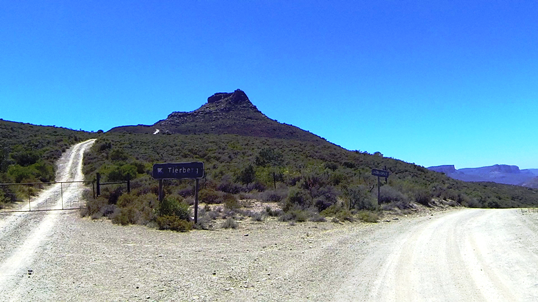 Photo: The summit of The Koebee Pass - Left to the Tierberg Pass (4x4 + LR) and right to descend to the Koebee River Valley / Trygve RobertsThe Koebee Pass routes straight ahead and the road immediately begins a very long, but gentle descent towards the Koebee River valley. The initial part of the descent is quite comfortable and lasts for 2,5 km where the first farm is reached. The road forks at the crossing of a small tributary stream. Keep left here as the right hand road leads leads to the farm Koringlandshoek approximately 3,5 km away. The left hand road ends 4 km later a T-junction, close to the western bank of the Koebee River.

The Koebee River valley is an isolated and remote part of South Africa with just a few farms ekeing out an existence along the rocky and sandy slopes of the valley. The right hand (southern) route follows the river bank and links the farms Bergvlei, Witkleigat, Bloukop and Sandfontein. The track continues for a total of 13 km from the T-junction to terminate at the last farm in the southern part of the Koebee Valley, called Ondertuin (Lower Garden). It falls under the shadow of the perfectly named peak Keeromberg (Turnaround Mountain). 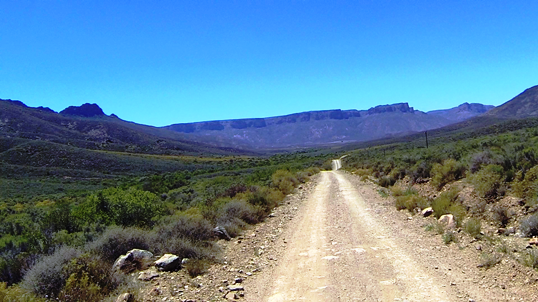 Photo: The end of the Koebee Pass on the eastern side, looking towards the Koebee River valley farming area. / Trygve RobertsThe left hand (north) option at the T-junction takes one first to the farm called Koebee, with the tall peak to the left (west) known as Allemanspunt [841m], whereafter the road passes through the farms, Boskraal, Daggafontein (which does not produce the plant after which it is named!) and ends at the Rietvlei farm, some 9 km away.

The Koebee Pass is seldom driven by anyone other than the occupants of the farms mentioned above. If you drive this pass, dont be in a hurry. Savour and appreciate the isolated and rugged nature of the pass and consider yourself fortunate to have been privileged to have traversed it. There is no cellphone reception. If you break down here, you will need to wait for the next passing farmer, otherwise take a satphone along with you. 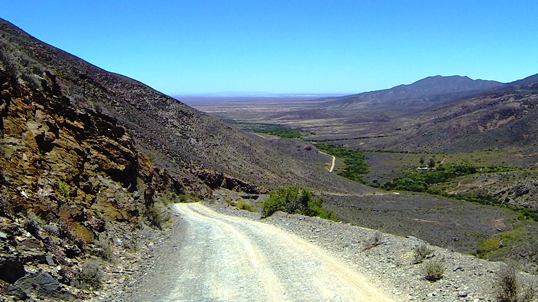 Photo: Looking north west towards the Knersvlakte on the way back to Vanrhynsdorp / Trygve Roberts

||Click to download: Koebee Pass (Note - This a .kmz file which can be opened in Google Earth and most GPS software systems)

Published in The Western Cape
Tagged under
More in this category: « Tierberg Pass Ouberg Pass (P2204) »
back to top