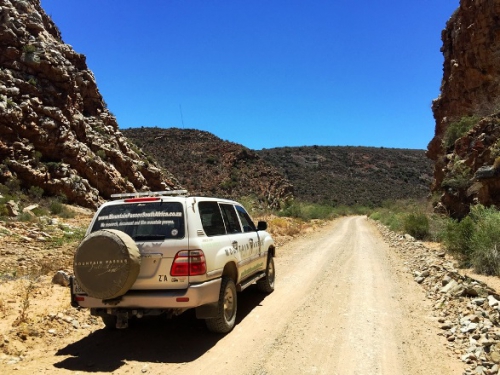 The Prinspoort is often confused with the Prinsrivier Pass, and it's easy to see why. Both passes are formed by the Prinsrivier, which is a tributary of Touwsrivier. It flows from north to south through the Witteberg and Anysberg mountains, where the Prinsrivier Dam and the Prinsrivier Pass are located. It then swings into the east for 11 km where it finds a path around Oshoek se Berg, before curving back into the south. It is at this second southerly bend that it has formed the Prinspoort, where it has carved a natural defile through the mountains, making it a suitable routing for a road. The pass is an easy, scenic drive of just under 6 km in length and connects the R62 tar road with the P315 and R323 further north.

Getting there: From the R62 between Barrydale and Ladismith, turn north onto a gravel road at GPS S33.647788 E21.0210970. Remain on this road for 18 km to arrive at the southern start of the poort. Along this access section, you will drive past farms like Ganskop, Wolwefontein, Cornee, Plathuis and Zorgvliet. 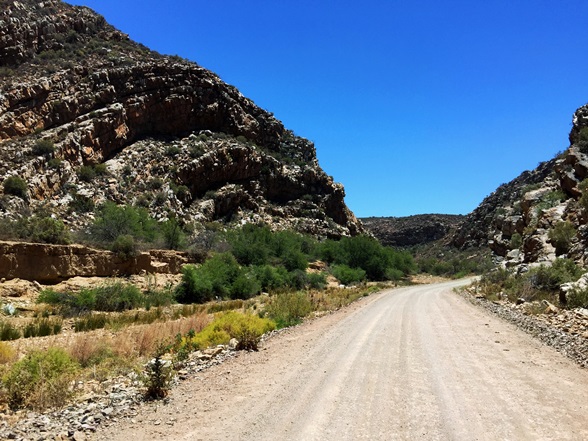 Approaching Prinspoort from the northern side / Photo: Trygve RobertsFrom the northern side, the poort can be accessed from either Laingsburg in the west or Ladismith in the east. From Ladismith head west along the tarred R323 for 27km where the tar changes to gravel. Continue driving west for 7,5 km and turn left at GPS S33.482236 E20.928952. Follow this road for 8 km in a south-westerley direction and turn left again at GPS S33.510468 E20.859815. Now drive south along a kloof for 4,3 km to arrive at another fork. Take the left hand fork, which is also the northern start of Prinspoort. It is best to have all your waypoints pre-programmed into your GPS for this poort, as there are many farm roads and it's easy to make a wrong turn and get lost.

We filmed this poort from north to south. It takes some effort getting to this poort, but once you get into the poort, you will be richly rewarded for your efforts. This is like a small version of the Seweweekspoort, as the road meanders over the river bed several times and the vertical mountain ridges tower up both sides of the road, revealing gnarled and contorted rock formations, some of them forming arches and spirals. 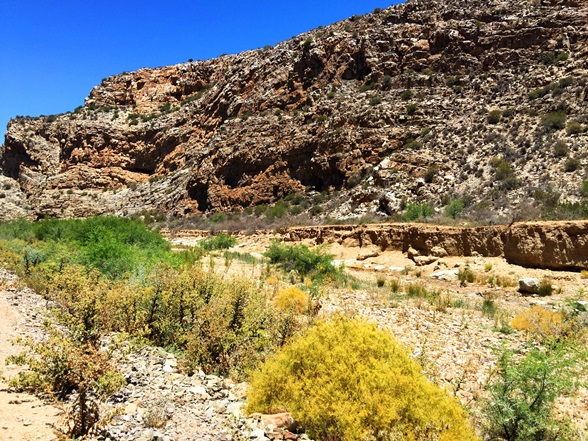 Recent water levels show the road to have been submerged / Photo: Trygve RobertsThe poort is rugged and dry, yet it's full of birdsong and careful observation will reveal a wonderland of plantlife surviving along the river banks.

Mostly the river will be dry and possibly you might see one or two pools along the poort, but like all poorts, they seldom provide lasting routes for roads, due to the frequency of the devasting flash floods that rush through these narrow passages in the mountains. On the day of filming the road repair crews were still busy clearing up debris from the most recent flood and the mounds of soil and rocks were stacked up to 4m high. At various points along this poort, the water levels would have been well above the heights of any vehicle. Should you find yourself at a poort like this and the weather is threatening or there has been heavy rain in the immediate area, this poort would be a death trap and it should be avoided completely under such circumstances. For 99% of the year, it will be perfectly safe to drive the poort and enjoy its stunning geology. 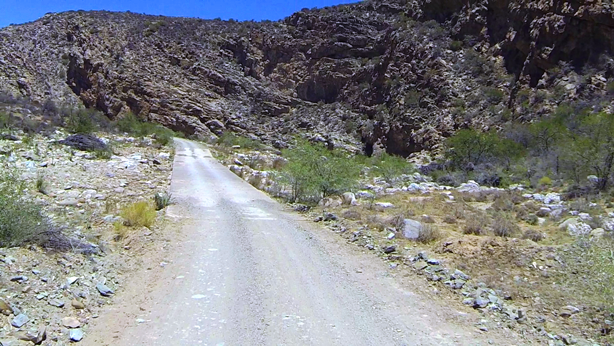 The third river crossing in Prinspoort / Photo: Trygve RobertsTowards the northern start, at the Doornboom farm, the poort changes direction into the south-west and the smaller peak to the left is the appropriately named Klein Loskoppie. On the left hand side (south) of the road a smaller ravine can be seen, which is the Matjiesgoedkloof.

The poort has 11 bends, corners and curves but keeping your speed low, will result in an enjoyable and scenic drive through the poort, which only has a 44m variance in elevation. It's a road that cyclists will enjoy with such easy gradients. The scenery is dramatic in places with steep krantzes looming vertically alongside the road and in the rainy season, the river might be flowing. Up ahead you will see two dominant peaks. To your right is Witberg [533,4m] and to your left is the bigger Loskoppie [615m], which is the most westerly peak of the Touwsberg range.

The river is crossed three times along the length of the poort and it should be noted that there are no bridges. These are all typical Karoo style concreted drifts and if there is water flowing, you need to check the depth before attempting any of the crossings. 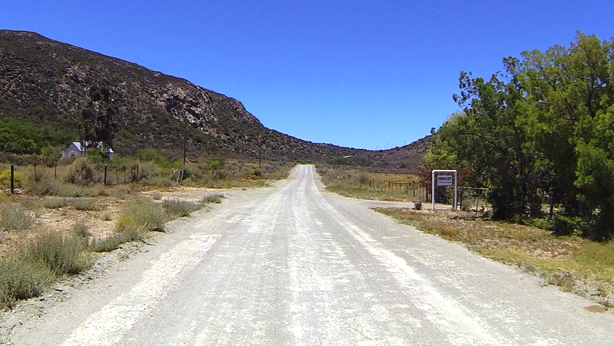 The southern end of the poort at the Zorgvliet farmstead / Photo: Trygve RobertsTowards the middle of the poort, where the cliffs are at their steepest and most dramatic, the river, road and poort, all swing away together to the left and head into the south east. As the southern side of the poort begins opening up, the mountain on the right quickly gives way to a wide valley, whilst the road remains on the eastern side of the poort in the shadow of the Groot Loskoppie peak.

When you reach the entrance gates to the Zorgvliet farm, (which is a lovely, historical guest house today), you have reached the official southern end point of Prinspoort.

After exiting the poort before the Zorgvliet farm, you will reach the confluence of the Touwsrivier and Prinsrivier. Here the road swings to the left and heads east, following the northern bank of the Touwsrivier. If you continue along this road for 14 km, you will arrive at Wolwefontein, where you can turn right (south) to reach the R62 after another 8 km.

The remnants of the old Makadas railway line can still be seen along parts of this road, especially at Wolwefontein, where the line is very close to the road. There are several interesting bits of information on this poort. The old Makedas railway line routed adjacent to the Touwsrivier at the southern side of Prinspoort was destroyed during the infamous Laingsburg floods.

Another story tells about a bee-nest high in a cliff where a San suiter lost his life when trying to get some sweetness for the love of his life. He drove kareeboom sticks into the rock layers to form a staircase to the nest. One of the sticks broke and the suitor fell down the cliff and broke his neck. The legend goes that when the moon is full, he still travels the poort.
One of the wooden kareeboom pegs is still preserved in a building of Andre van der Vyver, owner of the farm Zorgvliet at the southern entrance of the poort.

[Source: Faan de Wit sent this in and is an extract taken from a piece penned by Abraham de Vries from a book called 'Dorpie in die Klein Karoo']

||Click to download: Prinspoort Pass (Note - this is a.kmz file, which can be opened in Google earth and  most GPS models)

Published in The Western Cape
Tagged under
More in this category: « Witwaterspoort (P1469) Taal Monument Pass »
back to top