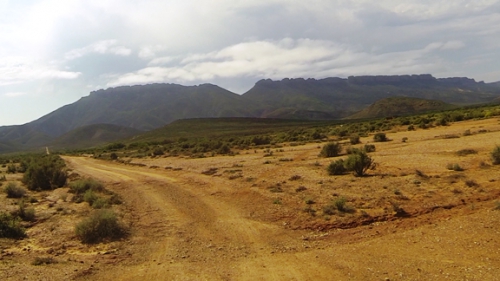 The start of the Ou Dooppoort Pass - Photo: Trygve Roberts

This rough, steep gravel pass lies on the eastern edge of the Knersvlakte and connects a few remote farms along the Klein-Koebee River Valley with the R27 and the towns of Vanrhynsdorp and Nieuwoudtville. It should not be confused with the Koebee Pass, which lies 7 kilometres to the south. The pass is not suitable for normal cars, but a commercial vehicle ("bakkie"} with reasonable gound clearance will manage it in dry weather. The average gradient is a stiff 1:9 with the steeper parts being at 1:4. Most of the pass will be driven in 1st and 2nd gear. The road is a dead-end, which makes this one more suitable to die hard gravel pass fans.

We offer three videos on this great pass:
1. Ascent
2. Descent westwards back to the start (Knersvlakte)
3. Descent eastwards into the Klein Koebee valley

Digging into the details

Getting there: The start is a little tricky to find and we recommend noting the waypoints below to ensure you dont get lost. Head east along the R27 from Vanrhynsdorp for 21 km until you are abeam the 815m high Vuurberg on your right (east) and turn right onto a minor gravel road at a closed gate at a sign marked Lankverwacht (GPS S31.495401 E18.908265). Close the gate behind you and head south for 6,5 km, ignoring the left hand fork to the farmstead, and keep right with a small stand-alone peak called Loskop [292m] on your right as the road crosses the last few kilometers of the plain. To your left (north-east) a lower ridge of the Vuurberg, called Klipberg [525m], stretches out onto the plain in a westerly direction, forming a river on its far side. Just after crossing this (usually dry) river bed, keep a look out for a dead tree and a vague intersection, where you must turn left at GPS S31.544768 E18.927089. This is the western start of the pass and it's very easy to miss if you dont have it logged on your GPS. 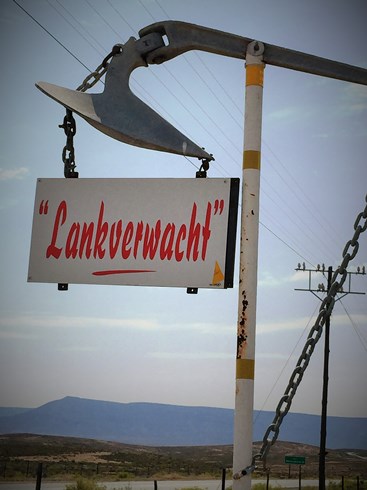 Look out for this sign which marks your turn-off the R27 / Photo by Trygve RobertsThe pass can be seen clearly from here as it worms its way far ahead into the cleft in the mountains ahead. Initially the road is arrow straight for 1,9 km as heads up the lower slopes at a fairly easy gradient of 1:25 and crosses a dry river bed. At the 1,9 km mark, the road bends through 90 degrees and a smaller track leads off to the left to the farm Palmietfontein. Remain on the bigger road turning right and head into the south-east. At this point the gradient also steepens to 1:15 as another stand-alone peak looms on the left, called Platkop [416m]. The road has some gentle curves along this section and crests a small neck, where one abruptly gets a much clearer view of the main pass.

At the 2,6 km the road descends down to cross another small river (also usually dry), then starts climbing again at 1:8. Ahead another peak blocks the way. This is Karelskop [389m] and the road passes it on the left via a long ridge. Due to the rough nature of the road, it is best to remain in 1st or 2nd gear depending on the power of your vehicle to maintain good control. At the 3,8 km point, the direction bends left into the east and the more serious climbing begins.

The road now heads in earnest for the lowest point between two large mountains dead ahead. To your left is the 982m high Moutonsberg whilst the 956m Bokkeveldberge stand sentinel to the south.

At the 4,2 km point, a sharp 90 degree bend to the left has to be tackled and here the gradient ramps up quickly to 1:5 as the road climbs up the top of a long ridge. The ridge is then followed accurately at this gradient to the 5,5 km point, where the firsts set of very sharp bends are encountered.The gradient varies from here to the summit between 1:5 and as steep as 1:3,6 !!! There are 12 bends in total including an extremely sharp hairpin, which is the second last bend at the 6 km point.

Stop at the small clearing at the hairpin, making very sure you have engaged the handbrake properly. This is a perfect spot to savour the amazing view over the plains of the Knersvlakte. The final climb to the top remains steep and suddenly the top of the pass is reached, where a new vista opens to the east, down a narrow valley, with increasingly expansive views of the Klein-Koebee River valley and the Kromvlei mountains. 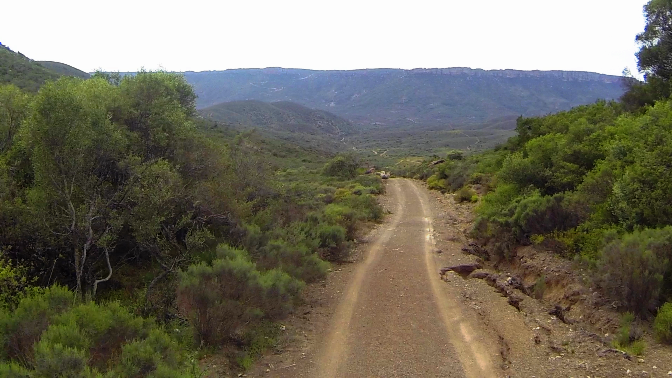 The eastern descent into the Klein-Koebee River Valley / Photo by Trygve RobertsIf you want to drive to the end of this road, you will need to add on an extra 50 minutes. The road descends at an easier gradient down towards the only farm in the valley. Just before the farmhouse, 850 m from the summit,  there is a fork in the road with no signage. Keep left here as this road bypasses the farmstead, and drops steadily along the right hand bank of a small perninial stream with two crossings which should be fine if the river is not flowing too strongly. This narrow kloof is completely different to the southern side and is quite bushy and lush by comparison.

Soon the kloof opens up onto the flood plain of the Klein-Koebee River and bends to the right (south-east). On the far bank of the river a tall mountain (Kromvlei Berg) blocks the way and a gravel pass can be seen zig-zagging its way up and over this mountain. Don't be tempted to access this road as it is on private property and ends in a dead end at the top of the mountain. A fork appears in the road, with the left hand fork dipping down to the river, where a closed and locked gate bars the way.  The government (1:50,000) map shows this road continuing over the river and turning north to the farm Klein-Koebee. This is no longer a valid circular route returning via the Klein Koebee Pass, as long as that gate remains locked. The road that heads north and back to the R27 is called the Klein Koebee Pass and follows the course of the river of the same name. It is featured elsewhere on this website. 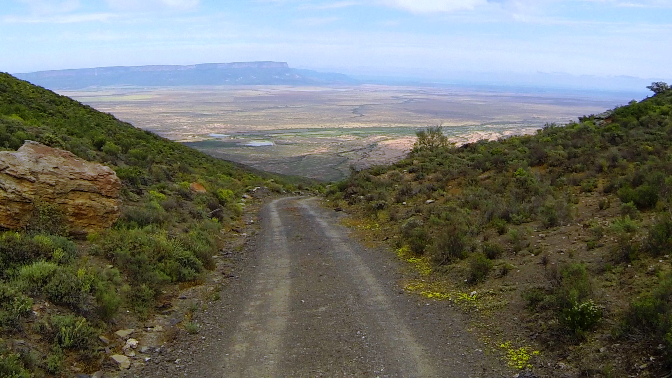 Looking west over the Knersvlakte from the summit / Photo by Trygve RobertsThe right hand road carries on for a few kilometres offering a few lovely (unofficial)picnic spots under shady trees next to the river bank, but the road deteriorates the further south one goes and eventually the track peters out completely. It is not possible to return via the Koebee Pass along the next gap in the mountain range to the south. You now have to do a U-turn and retrace your route all the way back to the start of the pass.

If you wish to drive the Koebee Pass, turn left at the starting point at the dead tree and drive for a few kilometres to a closed gate at the main gravel road and turn left again which will take you to the Koebee and Tierberg passes. This road is also a dead-end. If you want to return to the R27, turn right (north) at the dead tree where you started the Ou Dooppoort Pass.

||Click to download: Ou Dooppoort (Note - This is a .kmz file which can be opened in Google earth and most GPS software systems)

Published in The Western Cape
Tagged under
More in this category: « Fonteintjiesberg Pass (P2197) Brenton Pass (P1600) »
back to top