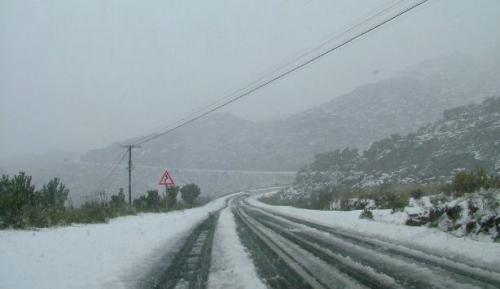 Getting there: From Ceres head north on the R303 on the Citrusdal Road via Prince Alfred's Hamlet and the Andrew Bain built Gydo Pass. Right at the summit of the Gydo Pass, take the tar road to the left (west) signposed: WITZENBERG VALLEY. This is the start of the pass. 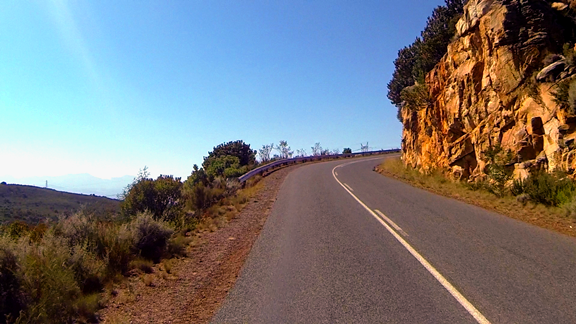 Sharp corners, steep drop-offs and vertical cuttings can be seen / Photo: Trygve RobertsThe aptly named Skurweberg mountain range forms the western boundary of the Warm Bokkeveld. Near the northern end of the mountain just to the west of the summit of the Gydo Pass is a high peak known as Hugosberg (1309m). North of this peak is another north-south ridge of the Skurweberg range called Hansiesberg (1843,2m]. The gap or neck formed between these two sub-mountains is where the Witzenberg Pass makes its passage.

Initially the road makes a wide 90 degree turn to the left, as the road descends gently following the plateau adjacent to the mountain.After 900m there is an obtrusive Escom sub-station which occupies a prime spot, but necessary to feed electrical power to the densely cultivated farms in the Witzenberg Valley. The power lines more or less follow the pass through the neck and down into the valley, often spoiling photographic opportunities, but such is the price of progress. 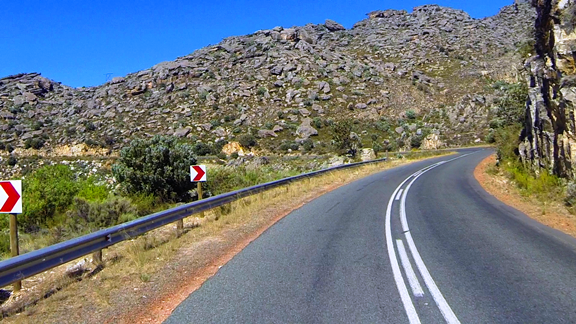 The only dangerous bend on the pass / Photo: Trygve RobertsOnce past the sub-station, the road kinks slightly to the right and then enters a very sharp left hand bend, virtually forming a complete U with an angle of 150 degrees. Adjust your speed to 40 kph for this bend.

The scenery is wild and rugged, with weird and weathered sandstone forming shapes to stimulate the imagination. The mountain here is an untidy jumble of huge rocks with hardly any signs of vegetation, but hidden in the shadows are millions of tiny plants that successfully survive. The Skurweberg spawns high quality water via hundreds of small streams that feed the many irrigation dams lower down in the valley.

After the U-bend, the road continues climbing into the south west where the summit is reached after a final direction adjustment into the west at the 2,6 km point. Here the view is obscured by the rocky slopes of the mountain to the left, right and ahead. 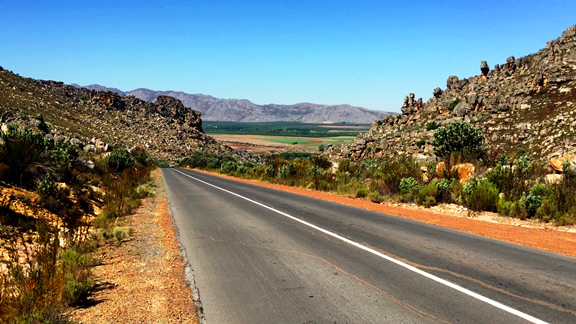 Views over the valley from the descent / Photo: Trygve RobertsJust after the summit, on the right hand side of the road, an irrigation dam can be seen at the 2,9 km mark, which is the first sign of life along the barren landscape. Here the road begins a wide and easy left hand bend as the road descends at a gradient of 1:16. It is also from this vantage point that one gets the first views of orchards of the valley some distance ahead and below. This descent is fairly straight and lasts for just over 1 km, where the road gets steeper at 1:7 and bends to the right as a signboard makes an appearance welcoming visitors to the valley.

Adjacent to the first old farmhouse on the left with its very old stone walls, called Slagboom (Slaughter Tree), there is a speed restriction and motorists should be wary of children, pets,livestock and inebriated adults (especially on weekends). The pass ends at the 5,35 km point where the road forks. It is possible to explore the valley to the north for a distance of 25 km where the last farm is reached, but then the entire route has to be retraced as there is no road out of this valley from this point. About midway along the valley there is a large dam alled Aasvoelvleidam (Vulture Marsh Dam). The valey has a complex system of canals and furrows to irrigate the thousands of acres of orchards and vineyards. 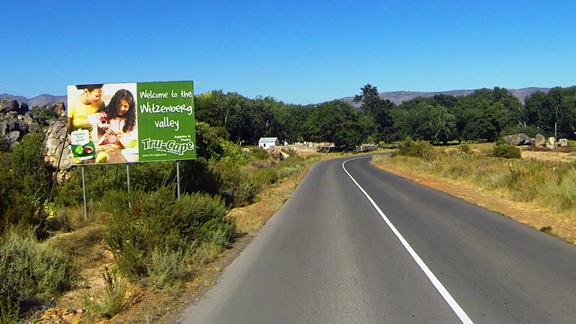 Near the end of the pass / Photo: Trygve RobertsThere are a handful of B&B's in the valley (contact Ceres Tourism) that offer totally quiet and peaceful weekend breakaways.

Despite the signboards indicating that this is the Witzenberg Valley, it is easy to get confused and locals have created some practical terminology to solve the complexities of place names. The Witzenberg Valley is actually the huge basin formed between four mountain ranges. This basin encompasses the land from the Nuwekloof Pass in the west, as well as the valleys that stretch from from Tulbagh to Wolseley and it includes Ceres and all the land up to the passes of Gydo, Theronsberg and Swaarmoed - also known as the Warm Bokkeveld. The much higher and more isolated valley we are describing on this page has been named by locals as the Agter Witzenbergvallei (Behind Witzenberg Valley) which is a much better description.

The valley is a major producer of decidious fruit as well as grapes for wine making.

||Click to download: Witzenberg Pass   (Note - This is a .kmz file which can be opened in Google earth and most GPS software systems)