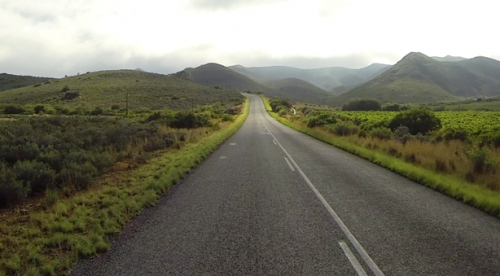 The southern start of the pass - Photo: Trygve Roberts

Getting there: From Bonnievale, head north out of the town on the P291, leaving the golf course to your right and soon you will pass a long kloof on the left called Olienhoutkloof. This secton of the P291 is known as Herry Hill Road. As the road swings through a lazy left hand curve, a long kloof opens up towards the north-west which is called Skilpadhoogte se Kloof. The railway line remains on the left (western) side of the road, but at a slightly higher contour. 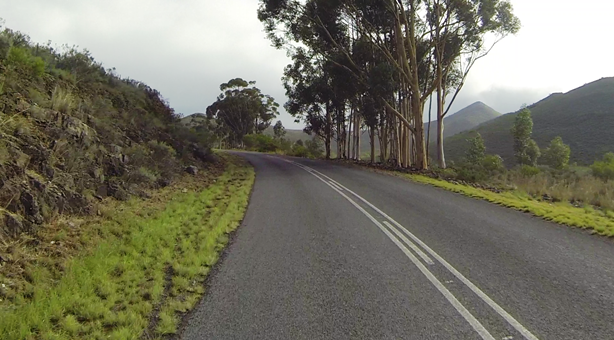 The first left hand bend with Tonteldooskop in the background/ Photo: Trygve RobertsAfter this long straight section of 2km, the road swings through a 90 degree right hand bend, which brings the direction into the north east. Here the road is flanked by two peaks - Witberg [421m] to the west and Koo Kop [396m] to the east. The southern start of the pass is approximately 6 km from Bonnievale.

The pass starts at its southern end at the crossing of a small stream commences straight into the north east at an easy gradient of 1:20 for the first kilometre. From this point the road bends gently to the left changing the direction into the NNE and the gradient picks up to 1:11 till the 1,8 km point, where another curve to the left changes the heading directly into the north.

At the 2 km point, the direction switches to the right by 80 degrees, but the bend has a reasonable arc and is not too sharp. The gradient ramps up to its steepest gradient of 1:7 as the crest of the hill comes up at the 2,4 km mark. The bigger hill to the right is known as Tonteldooskop [399m] and as the summit is creasted a marvellous vista opens up of the Langeberg mountains with a string of green, manicured farms nestling in its foothills. 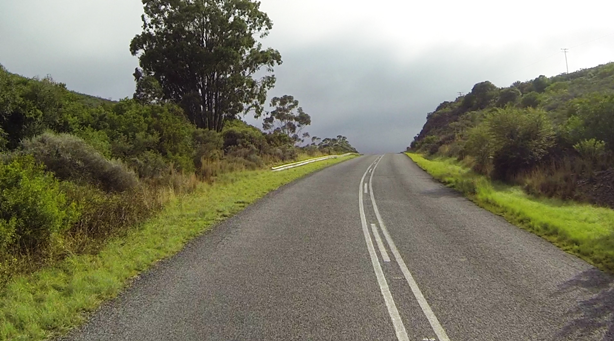 Steep gradients just before the summit / Photo: Trygve Roberts During the winter months, there are several waterfalls that can be seen cascading down the mountains. A short descent of 600m follows at a gentler gradient of 1:20 as the end of the pass is reached at the 3.0 km point, where the road forms a T-Junction with the R60.

A left turn will get you to Ashton (7 km) and a right turn will take you to Swellendam (38 km).

Bonnievale was founded in 1922 and named after the railway siding which had been called Vale since its opening in 1902 and Bonnie Vale in 1917. Municipal status was gained in April 1953.

With majestic mountains on the one side and the ever-flowing Breede River on the other, with beautiful fruit and wine farms lining the way, the awe-inspiring surroundings invite you into Bonnievale to meet the people who pride themselves on their warmth and unpretentious hospitality. 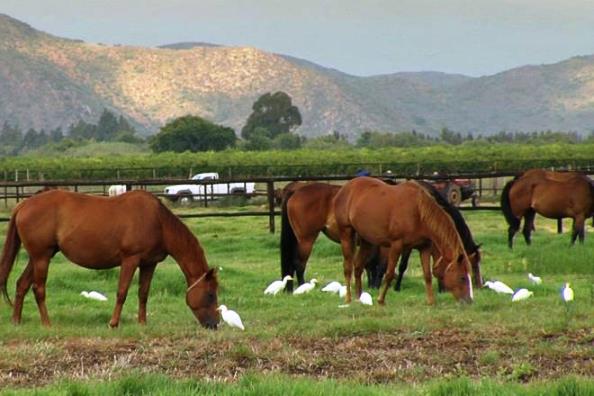 Wine, cheese and horses are all at home in Bonnievale / Photo: PanoramioBonnievale is situated on the banks of the Breede River. Surrounded by the Langeberg Mountain Range in the north-east, and the Riviersonderend mountains in the south-west, it is one of the most beautifully situated towns in the Western Cape.

Bonnievale is known as The Valley of Cheese and Wine for a good reason. There are two co-operative wine cellars, four estates and two private wine producers in the area. The Robertson Wine Route, which includes all the wine cellars in the
Bonnievale area, has in recent years won great acclaim in South Africa and around the world, for the production of outstanding white and red wines.

A word of caution: At the time of filming in January, 2016, the road between Robertson and Bonnievale was in a poor condition and peppered with potholes - particularly the eastern half of the road after the Ashton turn-off. Anyone towing a caravan along this road will need to proceed slowly and with caution.

||Click to download: Skilpadhoogte (P291)  (Note - This is a .kmz file which can be opened in Google earth and most GPS software systems)

Published in The Western Cape
Tagged under
More in this category: « Lawson's Pass (4x4) Cole's Pass (N2) »
back to top