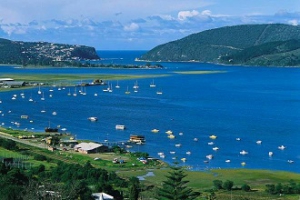 The Old Cape Road is located just to the north of Knysna and traverses the line of hills above the town through indigenous as well as pine and bluegum plantations. The 6.5 km long road is generally on a level gradient, with the exception of the western ascent, which is very steep. Although the average gradients are a comfortable 1:21, the climb up past Simola Golf Estate is as steep as 1:5 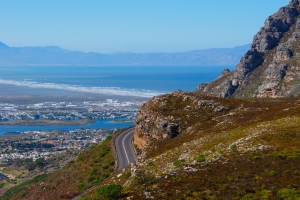 Despite the romantic, historical connotations of its name "Ou Kaapse Weg" ('Old Cape Road'), this is actually a relatively modern road, which was opened in 1968. There is a jeep track that runs more or less paralell, but higher up the northern side of the pass, which is purportedly an old wagon road road used to cart ore from the silver mine lower down the mountain in the late 1800's, and which is still accessible to hikers who walk the many beautiful routes available on both sides of the pass within the Silvermine Nature Reserve.

The pass is a major one covering a distance of 10,6 km and in that length contains 26 bends, curves and corners including 3 full horseshoe bends and another 3 corners in excess of 90 degrees. The pass offers a modern, well bult road with superb views over it's entire length of both False Bay and the Atlantic Ocean with the Steenberg Mountains and Silvermine Nature Reserve with its winter waterfall keeping travellers entertained through the middle section. It gives access to Fish Hoek, Noordhoek, Kommetjie, Simonstown and the Cape Point Nature Reserve.