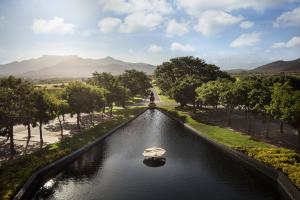 This official pass is located on the tarred 60 route just west of Robertson. The pass has a single S-curve with a deep cutting near the summit. The average gradient of 1:46 is watered down by the classic profile with some sections being fairly steep at 1:12.

It has recently (2019) undergone reconstruction and resurfacing and has overtaking lanes on both sides of the pass for vehicles ascending. The road carries heavy traffic and a lot of slow moving trucks frequent the route. There are no apparent dangers on the pass and drivers travelling in either direction can enjoy sweeping views of the Robertson Winelands. At the western end of the pass is the well known wine farm - Graham Beck wines, which you can't miss as it has a huge South African flag at the entrance.

The pass is named after the original farm over which it traverses - one of several old Dutch farms dating back to the 1700's.

The Sandberg Pass takes its name from the Sandberg which the road skirts on its southern side. The road is tarred in good condition and is suitable for all vehicles. The pass forms part of a longer tarred road which connects the R43 (Villiersdorp & Worcester) near the Kwaggaskloof Dam with Robertson. This road gently approximates the course of the Breede River along its southern bank and provides a much quieter and more scenic alternative to the truck laden R60 to the north. 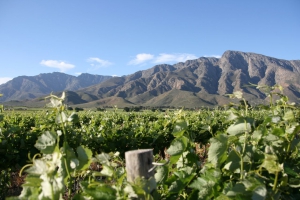 A pleasant little gravel pass close to Robertson in the Breede River Valley that connects Worcester with the R60 halfway to Robertson and provides a slower more scenic alternative to the R60. The road traverses two farming areas - first Rooilandia, then Eilandia. These two areas are separated by a ridge of mountains known as Die Bloubanke. The road interconnects all the farms in the valley with their immediate market towns and runs along the east/west axis on the northern side of the Breede River. (Wide or Broad River) The pass is suitable for all types of vehicles. 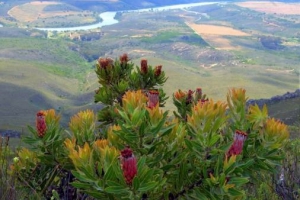 This fairly long, but easy gravel pass is located south of the Breede River in the Scherpenheuwel area and provides an unusual connection between the riverside road, which is interrupted by a nose in the mountain, making the continuation of the road alongside the river impractical. It offers an alternative routing to the R60 as it follows the southern side of the Breede River. The pass heads inland towards a mountain called Scheepershoogte, after which the pass takes its name. The pass is also sometimes known as the Gannaberg Pass. The scenery is lovely at any time of year, but it's best in spring time. 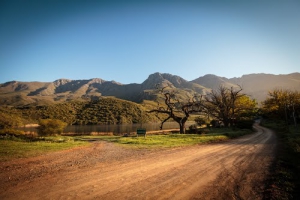 The Dassieshoek Pass is a gravel road just north of Robertson that connects the town with the Dassieshoek Nature Reserve, which nestles in the foothills of the Langeberg mountains. The pass is gravel and despite some extremely sharp corners, has relatively easy gradients and it can be driven in a normal sedan vehicle. The road is a dead–end. This is not an official pass, but qualifies to be listed in terms of our definition.