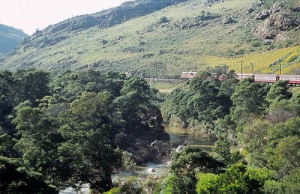 This old pass which was built by Thomas Bain in 1860 can still be clearly seen from the new road (R46) which is on the northern side of the kloof. The dry-stone packed supporting walls of the old pass still support the original road, which was tarred in the 1930's - as well as acting as support base for the railway line, slightly higher up the slope, which is still in use to this day and was originally built by Bain as well, some time after completing the road. The old road can still be driven, but it should be noted that it is blocked off at the Tulbagh end at the railway station, where one has to turn around and retrace the route back to the starting point at the main bridge on the R46. 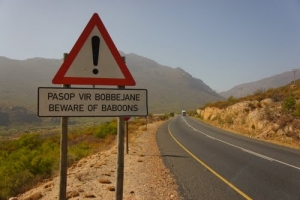 The Nuwekloof Pass has a long history dating back to the early 1700's and is also known in it's various forms as the Nieuwekloof Pass, the Roodezand Pass or the Tulbaghkloof Pass. It is a modern, safe, well engineered pass which connect the towns of Tulbagh and Wellington on the tarred R46 route.