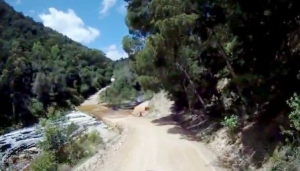 The Gouna Pass is a gravel road connecting the Gouna Forestry village in the north with the Old Cape Road close to the Simola Golf Estate. It is a spectacular drive through dense indigenous forests and amber, tumbling rivers. It is also sometimes confusingly listed as the  Kom se Pad pass as this is the access road from the west to the magnificent forest drive of the same name. Despite the easy numbers of the average gradient at 1;30, many parts of this pass, especially on the eastern side of the Gouna river valley, range between 1:5 and 1:8. Some of these steeper sections have been concreted to aid traction. The Gouna Pass leads to the Gouna Forestry Station and also joins Kom se Pad traverse at that point, allowing a complete circular drive starting and ending in Knysna.