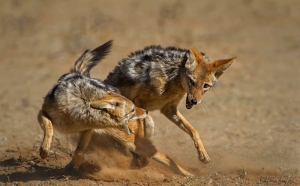 This is a minor little poort of 1,5 km tucked into an east-west running ridge called Rooirant just off the R381 between Beaufort West and Loxton in the Great Karoo. It's quite a mission finding it, involving complex navigation through a number of farm roads. The poort only has a 10m altitude variance, so don't expect exciting driving through this one, as the average gradient is a very gentle 1:150 and the steepest section is at 1:16.