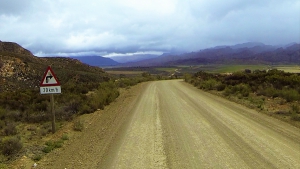 This short pass is located on the gravel surfaced P2244 in the Koue Bokkeveld and forms a change in altitude between the last fork where the tar ends from the Op die Berg settlement and the Katbakkies Pass about 7 km to the east. The pass is only 1,7 km long, and has a minor altitude variance of 60m producing an average gradient of 1:28. It offers excellent views, but be careful of the two very sharp bends, one of which curls through more than 130 degrees. There is one view-point near the summit which offers perfect views out over the valley with its orchards and dams with the towering peak called Sneeukop in the background. The pass is named after the Klein Cederberg farm and nature reserve near the summit. 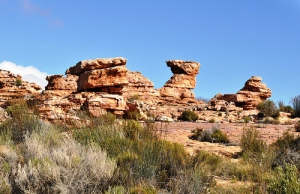 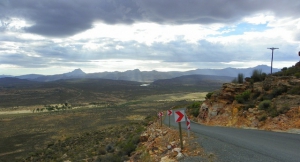 The decisively steep Katbakkies Pass traces over what was once an old sheep-trekking route over the Skurweberge mountains. It joins the Koue Bokkeveld with the Ceres Karoo and Tankwa Karoo. It was recently (1999) tarred and although fairly short, it has a serious average gradient of 1/13 which will tax many an underpowered vehicle and especially the two sections about quarter way up the western ascent, which measure out at UNDER 1:4! The pass is sometimes covered in snow during winter as the snow line of 1000m ASL is well below this pass's maximum altitude of 1200m. It's a narrow road and has no road markings, so take it slowly and enjoy the spectacular barren landscape.