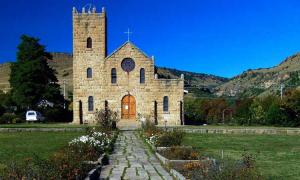 As you read this newsletter our tour group will be on their way - or arriving at our tour starting point, which is at Phillip and Elrita Rawlins lovely guesthouse 'Resthaven' in the sleepy village of Matatiele. Tomorrow Phillip, who is one of the most knowledgeable people in the area, will join us in the lead vehicle as he takes us to a range of secret, off-the-beaten-track points of interest which will include the Mariazell Mission church with its very own hydro-electric plant as well as a visit to the mountain top lake.

Once dominated by wetlands and marshes, Matatiele derives its name from the Sotho language words “matata”, meaning wild ducks, and “ile”, meaning gone. When taken together, Matatiele conveys a message that “ducks have flown”. In Phuthi language, the town name is pronounced “Madadiyela”. The common informal name for the town in any of the languages mentioned, including English, is “Matat”. And those that are born here call it “Sweet Matat”.

Today, its area is predominately farmland, where 100% organic red meat is on offer, and tourism is a primary source of income. As one of the top 12 towns among South Africa’s popular tourist attractions along Route 56, Matatiele provides many activities for fishermen, hikers, bikers, cyclists, bird watchers and landscape photographers. Moreover, the Matatiele Museum (a former Dutch Reformed Church) – displays dinosaur fossils, San people, missionaries, and the town's history from its 19th century gun runners and smugglers to a quaint town filled with friendly locals serving authentic Xhosa cuisine.

Evidence of Stone Age inhabitants in the form of art adorning rocks is found throughout the area. In the early 1860s, the Griquas settled here after migrating across the Drakensberg from Philippolis. The town was the centre of cattle rustling and gun-running, and order was only restored in 1874 by the Cape Mounted Riflemen. The town became a municipality in 1904.