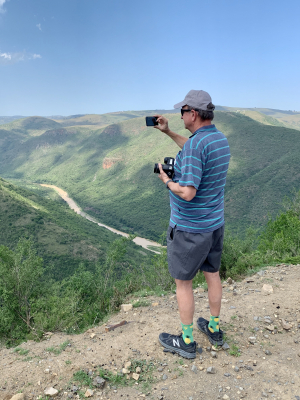 After a short stint on tar, we arrived at Tabankulu. These small rural towns are something of an education and it's best to have a positive mind-set before you get there. It was a Saturday morning, so the village was bustling with energy. Barbeques on open fires next to the franchise shops in the main street; skinny dogs criss-crossing the road looking for a morsel of food; a few bemused looking goats; a small selection of fine Nguni cattle; Toyota Minibus taxis everywhere and then there are the people - all seemingly happy with the chaos around them. It's a real Transkei experience to be savoured and remembered. No-one in the rural Eastern Cape drives with their lights on, so the locals, after seeing this long convoy of vehicles with lights on, no doubt thought we were off to a funeral and due courtesy was given to us.

Just west of the village, there is a fork. The right hand option leads to a marvellous pass, called the Gwangxu Pass, which is currently a dead-end as the bridge at the bottom of the pass has been washed away. Our route took the left hand option to drive the highlight pass of the day - the Mzintlava Pass.

Initially the road follows the contour line of the mountain, dipping in and out of the ravines, with expansive views to the south over the green hills and valleys of the Wild Coast. It's not long and the road enters a magnificent indigenous forest. It was a hot day and since it was close to lunchtime, we pulled over inside the forest, fully occupying one half of the roadway, to enjoy our lunch break. The forest was alive with birdsong and the sounds of burbling streams. Local vehicles stopped as they passed by greeting us with smiles and waves. Forget about all those preconceived ideas you had about the region. The locals are genuinely friendly.

The road now climbs at a gradient of 1:14 for the next 1,5 km with magnificent views over the Tshumi River valley on the right whilst the dense forests of the Ntabankulu Forest Reserve smother the southern slope of the mountain ahead. A short and steep descent follows, as the road skirts the northern side of another valley and meanders eastwards whilst undulating and descending towards the 15 km mark and the village of Bomvini where there is a very sharp hairpin bend to the right of 160 degrees. At the apex of this hairpin a smaller road leads off into the north-east to the village of Ncetshane.