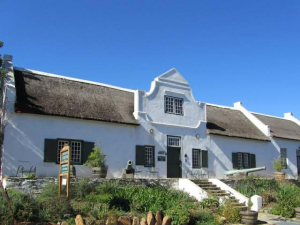 This week in our series on the oldest towns in South Africa, we have a look at the town of Tulbagh. It's the 7th oldest town in SA est. 1795. The valley was discovered in 1658 by Pieter Potter, a surveyor who worked for Jan van Riebeeck. In 1699 14 farmers settled in the valley, and the town started developing around 1743. Tulbagh was the last stop for the Boers who took part in the Groot Trek before heading into the unknown interior of the country. The town was named after the former Dutch Governor, Ryk Tulbagh. In the 1860’s, the town grew exponentially and saw the extension of a railway and several roads were built.

Travel back in time over 300 years...  Charming Church Street boasts the largest number of Cape Dutch, Edwardian and Victorian provincial heritage sites in one street in South Africa, all lovingly restored post the devastating earthquake of 1969.

Before road engineers conquered the forbidding mountains at Paarl and Wellington, Tulbagh was in fact the trekker's last stop en route from the Cape of Good Hope before entering the country's wild and untamed interior to the north.

In the heady days following the discovery of diamonds at Kimberley in the 1860s, Tulbagh enjoyed a flowering of prosperity. Yet after the construction of Michel's Pass, and the advent of the railway effectively bypassing the town, it subsided into a rural backwater – which paradoxically preserved its historic character. While causing much structural damage, the earthquake of 1969 resulted in a national fundraising effort and a very successful restoration project.