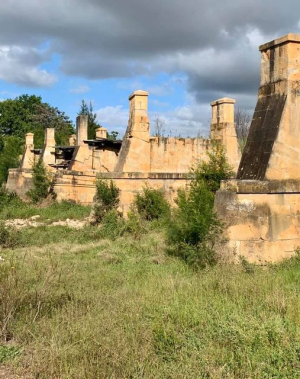 We have a wonderful tour programme lined up for 2021. Some of our popular tours will be repeated and some news ones are being created. We've listened to YOUR suggestions. The new tours will be published soon.

Day Zero: 19th October. Our rendezvous point for the start of the tour was the lovely Rotterdam Boutique Hotel. This old establishment has been lovingly restored and is located on a working cattle farm just outside the hamlet of Buffeljagsrivier, near Swellendam. A museum 'Die Waenhuis' is in close proximity to the Fraser-Jones suites with its burbling fountains and enormous rooms. We travel a lot, but those rooms were the size of a small house.

We had 10 vehicles on the tour, including two non 4WD vehicles. We held our drivers briefing promptly at 1800 on the stoep of the old thatched restaurant to the sound of sprinklers and frogs, nicely topped off with the fragrance of lavender and freshly mowed grass.

After the driver's briefing, Andrew Fraser-Jones (the proprietor) took us over to the museum for a fascinating 20 minute talk covering the history of the area. Dinner was excellent and a strong northerly wind ensured everyone was tucked in nice and early ready for the first day of passes.

Day 1: 20th October. After a hearty farm breakfast, we managed to get the show on the road by 0900. Our first stop was at the so-called Sugar Bridge, just a few kilometres from the hotel.

Mr Skirrow designed the bridge but died soon after, leaving the actual construction to Mr Atmore. Huge sandstone blocks were used for the piers and the bridge deck was solid teak salvaged from the shipwreck of the 'Robert' at the mouth of the Lourens River in 1847.

Portland cement was not available at that time in South Africa. Traditional local mortar was made from sand and lime but it took a long time to set to full strength, leaving the builders with concerns that the Buffeljagsrivier might flood during the construction phase and wash the new bridge away. So they imported gypsum from France but this set too quickly to allow the accurate placement of the sandstone blocks. To retard the setting time, household sugar was added as an admixture. Hence the bridge earned the nickname of the Sugar Bridge and opened to traffic in 1852. It did its job perfectly well for 101 years when the new road was opened in 1953.

After a 1 km stint on the busy N2, we detoured off to visit the missionary village of Suurbraak. Our routing then took us up Moodies Pass (named after a magistrate in Heidelberg), then along a magnificent stretch of gravel road all along the foothills of the Langeberg which included the Boosmansbos Pass, Doringkraal Pass, Seekoeigat Pass and Wadrift Pass. The flowers were amazing along the route and we had just one slightly deep water crossing to contend with.

That was just the entree. We had another three major passes to drive. Next up was Gysmanshoek Pass. This pass has very comfortable gradients with only one steep section of about 2 km. The route follows a river valley and the fragrance of proteas and fynbos greets those who drive with their windows open. We took a break at the summit for some photos and tackled the descent.

Our first town stop was Ladismith and like so many places in South Africa, the closures of busineses due to the lockdown was a stark reminder of what our country still has to work through, before things can return to some semblance of normality. Instead of driving along the R62, we drove a picturesque gravel route around the northern end of Ladismith, known as the Hoekoe Valley. One of the interesting points of interest is Stanley's Light. A local gentleman walked up the mountain armed with plastic pipes, a bicycle wheel and dynamo. At the source of the spring near the summit, Oom Stanley built his little water mill which powers the dynamo which in turn lights the bulb in the bicycle lamp. It can be seen from the town at night and its brightness (or lack thereof) is a sure indicator of how much water is flowing down the mountain.

We also stopped in at the old Lutheran Mission Church at Amalienstein for photos and then arrived at the start of one of the main attractions for the day - Seweweekspoort. Just as one enters the poort from the southern side, a small road leads away to the right. It terminates 2 km later at the Tierkloof Dam, which is the main water supply to Zoar and Amalienstein. Its a narrow, deep dam that holds back 45,000 cu.m of fresh water with wall height of 17m.

We normally stop under the dam wall and enjoy a lunch break, but the authorities have since decided to padlock the gate. This is no doubt due to bad behaviour by certain individuals. What a pity. There is a large flat area just before the gate, which can accommodate ten or more vehicles, so we made good use of that.

Seweweekspoort never disappoints, but driving it after 1500 on a sunny day provides lots of glare from the front and does not show off its beauty to maximum effect. We always make provision for this and ensure that we when we drive back through the poort, it is in the morning with the light from behind.

Our last pass of the day was Bosluiskloof. Every time we take guests down this pass, there is always a sense of disbelief at the raw and rugged nature of this road and the achingly dry valley it provides access to.

We arrived right on schedule, ready to enjoy the excellent hospitality at Bosch Luys Kloof lodge. A magnificent Karoo sunset provided a perfect setting for happy hour on the pool deck with a warm and windless evening. The food at the lodge is very good and our band of travellers hit the sack tired and happy, looking forward to the next day, which was a 'free' day to be spent as they wished inside the reserve. More on that next week.