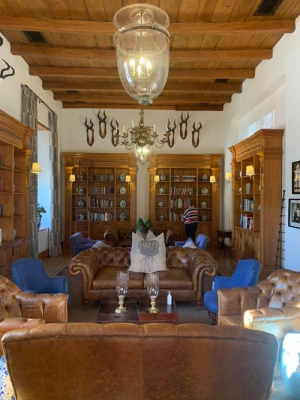 The two weeks that were....

* Locusts swarms in the Karoo

* Passes of the Week

We returned from the Ben 10 Eco Challenge V4 Tour yesterday, still feeling elated from all that fresh air and marvellous scenery. Much of today's newsletter will cover the highlights of the tour. We decided not to publish a newsletter last week due to it being Easter and many of you being away, so today's edition will be a bit longer than normal.

During the thousands of kilometres travelled last week, we had a few close shaves on the roads. All of them were caused by slow moving vehicles turning in front of us with a big speed variance. Other than those three incidents, driver behaviour was fairly good. One of the interesting points we noticed is that in the Eastern Cape, hardly any vehicles drive with their lights on. Even in thick mountain mist this was the norm. When we flashed lights at these vehicles, the response was a friendly flash back in return, but not one of them read the message as intended! There is some road user education required in that province.

Locusts in their millions

The Karoo is looking very good. Many dams are full; rivers are running, vegetation is green and the livestock is looking healthy. The flip-side of  that good news, is that massive swarms of locusts have erupted. Between Willowmore in the south and Middelburg in the north, we encountered huge swarms. Driving through those swarms at 120 kph is like driving in a hail storm. It looked like a plague of Biblical proportions. Our Land Cruiser is not a pretty sight after that massacre and we wish the good folks at the car wash lots of fortitude when we drop Big Bertha / Thirsty Kirsty off for a well-deserved clean-up! Anyone who experienced driving through these swarms should check their radiators for damage as well as clean any dead insects from the fins.

Our routing up from Cape Town was via Graaff-Reinet where we overnighted at the Drostdy Hotel. It's above average in terms of price, but then it is a 5 star establishment. The night time temperature was around 27C making for a very pleasant moonlit outdoor dinner and later a walk around the immaculate gardens with their sculptures and fountains. The main building is a delight and serves as a museum, but one that you can use. The attention to detail and maintenance is excellent. In short, you pay your money and you get your goods. We enjoyed dinner with two of our guests also bound for the Ben 10 Tour - Trevor Hall and Dirk Reyskens.

Departing from Graaff-Reinet the next morning, it was a sight to behold seeing the Nkweba Dam (the town's main water supply) with a decent level of water in it. It has been bone dry for a number of years. The original Van Ryneveld's Pass can still be seen on the western side of the dam, which was one of the first road building projects attempted by Andrew Geddes Bain, who first settled in Graaff-Reinet and earned a living as a saddler there, before trying his hand at road construction - an occupation that he would excel at and would become known as the 'Father of South African geology'.

Our route took us over the towering Wapadsberg Pass and on to Cradock. The road was very quiet with maybe 5 vehicles encountered along the entire section. Near Tarkastad there are extensive roadworks, where zero progress has been made since we passed there six months ago. Only the stop-go staff are in attendance. It would seem that the contractor has gone insolvent. Expect this one to take years to reach a successful conclusion as a new contractor has to be found, tenders submitted and so on. It's going to take a long time. Due to the long delays, we would not recommend this route to anyone.