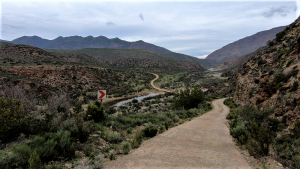 The Jan Muller Pass is a short, steep pass, with a descent and ascent over the Gouritz River via a low level concrete bridge, which is also named after Jan Muller. It's located on the R327 connecting Van Wyksdorp with Herbertsdale.This rugged gravel road pass is fairly short at 3,6 km and descends very steeply down the western side, then ascends in a series of tight switchbacks after crossing the Gouritz River at an altitude of just 68m ASL.

The western ascent is very steep with gradients as steep as 1:5, but the road builders have concrete-stripped this section allowing for good traction. It makes the road driveable in a normal car but due to the rough nature of the concrete surface most vehicles will need to remain in 1st gear if driving the pass in the reverse direction, until western summit is reached. 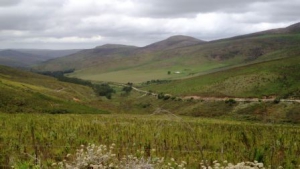 This thoroughly enjoyable and fairly long pass of 19 km straddles the Vreysrant Mountains between Herbertsdale and Vanwyksdorp. The road is generally well maintained to a high standard, despite the gravel surface. The northern section can get quite narrow at times, but should present no problems providing speed limits are adhered to. The road was realigned to improved geometric standards in 1920.

There are at least half a dozen river crossings over low level culverts, which can be dangerous if the rivers come down in flood. In the video clip there is ample evidence of fresh repair work and it can be seen just how high these rivers can get. Poor judgement or ego driven decisions could be fatal. If you are not prepared to walk it, then don't drive it. 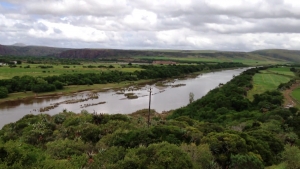 This easy, tarred pass lies on the R327 between Mossel Bay and Herbertsdale, and finds its end amongst green fields on the banks of the Gouritz River. The pass dates back as far as 1850. It's above the national average at 8,5 km and descends a substantial 253m producing an average gradient of 1:34 via 13 bends, corners and curves.

The main geographical feature of this pass, is its proximity to the Gouritz River which has a huge drainage area of 45,715 sq.km. The Gourits River flows from the confluence of the Gamka River and Olifants River and is joined by the Groot River, before flowing through the Langeberg Mountains and coastal plain. It eventually drains into the sea through the Gourits Estuary near Gouritsmond. At the point where the pass kisses the banks of the river, is one of the few places where the river can be accessed in tranquil mood over a wide floodplain.