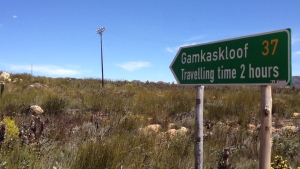 This has to be one of the most iconic gravel roads in South Africa, holding almost pilgrimage status to gravel-road devotees. It winds through 37km of rugged mountain scenery, culminating in the vertigo-rush, single-width Elands Pass, and terminates in the Gamkaskloof - reminiscent of a lush oasis and paradoxically nicknamed Die Hel (The Hell).

Due to it’s length, we have produced  a multiple video set to help orienteer first time drivers. We discourage anyone from trying to complete this as an out and back drive in a single day, due to the slow average speed of around 25 kph. Besides the time issue, it would be a shame to have to rush through this magnificent part of South Africa and not have the time to allow the Gamkaskloof to work its magic on you.