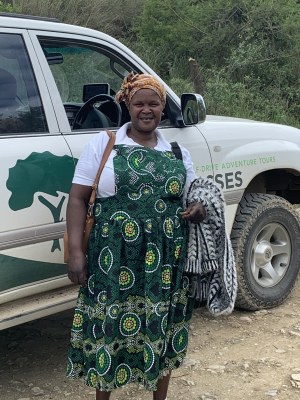 Circular Route from Kob Inn to Collywobbles and Mbashe River Dam Wall returning via a northerly option to Kob Inn.

We got the convoy rolling a little after 0830 and headed back up the main gravel road to Willowvale. The biggest mistake most people make touring the Wild Coast is to estimate time based on distance on a map. It invariably takes much longer than planned. We turned off the main road at Willowvale to cross the Shixini River gorge via a scenic pass (still to be processed and filmed by MPSA) and traversed village after village as we did the (by now familiar) split fork, split fork type navigation eventually arriving at the ridge to the south of the Mbashe River gorge, at an area known as The Collywobbles. I was very glad I had plotted the route meticulously before the tour.

This rather odd English word dates back a century or more and was used to describe an upset tummy. There is a story that is well documented that Maj-Gen Sir George Pomeroy Colley during a visit to the Eastern Frontier, surveyed this amazing scene of the Mbashe River winding through the hills like a snake and remarked that it gave him the collywobbles. One if his subordinates made the remark: “Look Sir Colley has the wobbles” and the viewpoint earned its name in perpetuity.

We followed the spine of a long ridge offering marvellous views on both sides. Here we pulled off and enjoyed a peaceful lunch break in lovely weather as vultures soared overhead. After lunch we followed this same road as it descended very steeply down to the river. The gradient along the one section reached 1:4, which had been concreted to aid traction. The track terminated right on the banks of the Mbashe River where we had a close up experience of just how big and powerful this river is.

We had to then drive back up the very steep pass and turn north to descend towards the Mbashe Dam wall. This was also a fairly steep and interesting little pass, which ended right at the dam wall. All the sluices were open disgorging water that looked much more like a chocolate milkshake than water. Two local security guards greeted us and waved us through. The dam wall itself is just a little wider than a car. On either end are large steel cylinders painted yellow which determine whether your vehicle will fit on the wall/bridge or not. I noted it had many scuff marks on it, so the cylinders were doing their job!

We crossed first (having the widest vehicle) and the rest of the convoy followed one by one, camera shutters clicking and video cameras whirring. One of the guards as an afterthought, dashed over the wall in ankle deep water to catch up with us, looking for a handout. Someone obliged and so our informal bridge tax was duly paid.

The drive back to Kob Inn was very long and quite tiring, but the scenery remained beautiful. We arrived back at Kob Inn close to 1800 and were delighted to find Jim and Zen Rankin in the pub, having made their way to Kob Inn in their rental Nissan Almera.

At that stage the errant VW Touareg had been collected by lowbed and transferred to the agents in East London. An elated Jim bought everyone in the group a drink to celebrate their reunion with the group and the safe retrieval of their vehicle. It was completely untouched by the locals.