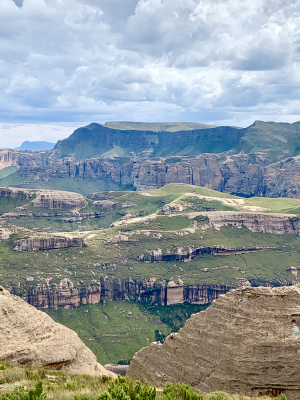 It rained heavily overnight, but the morning was crisp and clear as we set off on day 2. The positive side of the rain was that dust levels were nice and low. There was however and even higher rain forecast for later in the day, so we made the decision to bring our rest day forward and take our group up Dawid se Kop and later to The Castle vulture colony in favour of tackling the challenge passes in dodgy conditions. As things turned out, the forecast was spot on.

We had a more leisurely start at 09.30 and drove along the R393 over the little known Fetcani Pass. One could not be blamed for thinking this pass was named after an Italian immigrant, but the Fetcani were in fact a ferocious Zulu tribe who once passed through here. This tribe, who were descendants of the Masutu and Mangwana tribes, became one of the most feared ethnic groups in the central part of South Africa in the 1800's. They had fled from the marauding army of Chaka, who had also stolen their cattle. With revenge in their hearts, they set out to become very aggressive and warlike, focussing only on winning their skirmishes with other tribes and acquiring cattle. They took no wives and consisted only of young fighting men.

The word Fetcani translates into "Desolators" - which is an accurate description of what they left behind after a raid. Other tribes feared them greatly and the Fetcani's fearsome reputation spread far and wide. They originally settled on land north of the Orange River, but later moved further south and east in their never ending quest to seize cattle. They practised what the British military aptly called a 'scorched earth policy' leaving no-one alive and burned or destroyed others huts and possessions. The British subsequently applied exactly the same policy during the Anglo Boer Wars. This tribe caused headaches not only for King Chaka, but also for the British military forces in the frontier areas.

After a short drive we turned left onto the farm road leading to Sarel Vorster's farm, who had very kindly given our group permission to cross his land. During this drive we spotted a number of antelope at close quarters, mainly Bontebok and Blesbok. The going was slow with many gates having to be opened and closed. Barrie Barnardt at sweep did a sterling job and since he was solo in his vehicle, it meant closing gates was a lot of work. The route took us over streams and through cattle kraals with the gradient gently rising as a sort of 'sagmaker' for what lay ahead.

We had everyone switch to low range for the pull up to the top, once we started on the concrete section. It is as well that the steepest part of this road is paved, as it would be almost impossible getting up there on a loose surface. The pitch reached a steady 1:4 near the top and the views open up dramatically as the summit is reached. There is a fair sized space below the peak, where we parked the convoy and had everyone (well almost everyone) walk the last 400m up the very steep section to arrive at the true summit of 2515m. We took four passengers (who weren't up to the stiff walk) up to the tower with the Land Cruiser.